Earlier this month, the Trump administration announced a decision to apply a 30 percent tariff on imported solar cells and panels. The Solar Industries Association denounced the measure, projecting job losses and cancellation of solar investments. But the solar tariff discussion hides a larger renewable energy issue. Global investment in renewables has stalled in the US, in Europe, and in many markets across the world.

These efforts resulted in a rapid rise in renewable deployments across the world. From 2004 to 2011, global renewable energy investment grew at a 26.7 percent compounded annual rate. By the end of 2012, more than 200,000 wind turbines were operating worldwide. Germany alone boasted more than one million solar rooftop installations. 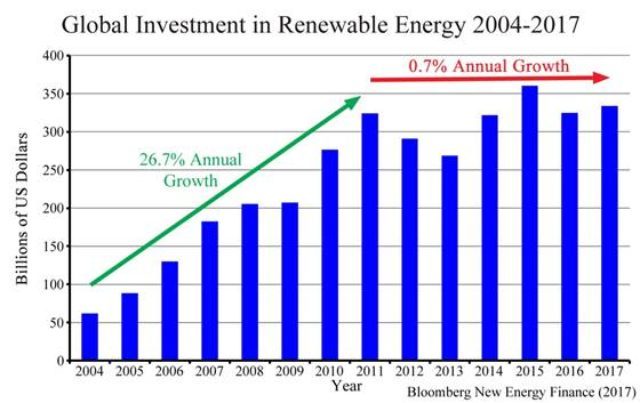 European nations have the highest per person renewable investment in the world and extensive experience with renewables. Europe invested over $100 billion each year in renewable energy in 2010 and 2011. But last year Europe’s renewable investment was only $57.4 billion, down 50 percent from the record years of 2010‒2011.

So why is renewable investment faltering? One answer is that renewable projects are heavily dependent upon subsidies, and subsidies are being cut. The combination of rising electricity prices and budget-busting subsidy bills is forcing nations to cut back.

Europe invested $850 billion dollars in renewables from 2000 to 2014 and continues to pay a huge ongoing price. Residential electricity prices climbed to three times the US price in Spain and four times the US price in Denmark and Germany. German consumers pay an EEG levy in their electric bills, amounting to €25 billion a year to subsidize renewable energy. Environment minister Peter Altmaier estimates that cumulative renewable subsidies paid by German consumers will total an astonishing one trillion euros by 2040.

Over the last five years, subsidies or mandates have been cut in Bulgaria, the Czech Republic, Germany, Greece, Italy, Netherlands, Spain, and the United Kingdom. Retroactive cuts to feed-in tariffs were made in Bulgaria, Greece, and Spain. Germany cut feed-in tariff subsidies by 75 percent and levied grid fees on residential solar owners. In 2015, the UK government suspended all new subsidies for onshore wind farms and reduced subsidies for residential solar installations, causing a steep fall in investment in both 2016 and 2017.

US subsidy cuts are also in process. The Consolidated Appropriations Act of 2016 began a phased reduction of the wind Production Tax Credit (PTC) from 2016‒2019. If not extended again, the PTC subsidy will expire after 2019. The Act also reduced investment tax credits for wind and solar.

Some claim that renewable energy can power modern society. A 2017 paper by Mark Jacobsen and others at Stanford University, calls for 100 percent renewables by 2050, with wind and solar providing 95 percent of the energy. But this wishful thinking is not supported by the trends.

Since 1965, global energy consumption more than tripled to 13.3 billion tons of oil equivalent, according to the BP Statistical Review of World Energy. In 2016, wind and solar provided about two percent of the total. Each year the world consumes an additional United Kingdom worth of energy. Wind and solar sources are unable to supply even the annual growth in world demand, let alone replace our traditional energy sources. 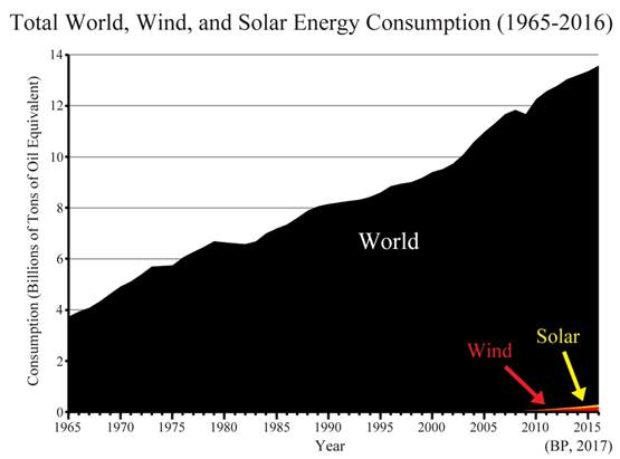 Renewable energy investment has stagnated, buried by rising energy prices and unaffordable subsidies. The world is being forced to return to sensible energy policies based on cost, performance, and real environmental benefit.