The three American heroes who helped stop a terror attack on a train to Paris in 2015 told “The View” that rushing the attacker was the “best option” at the time.

The heroes’ exploits is portrayed in the new film “15:17 to Paris.”

Stone was on a backpacking trip in Europe with Anthony Sadler and U.S. Army National Guard soldier Alex Skarlatos when they boarded the train with about 500 other passengers. During the trip, they heard “a lot of commotion” and gunshots.

When they turned around to see what was happening, they saw a shirtless man holding an AK-47. That’s when the three men took their chance to disrupt the plot. 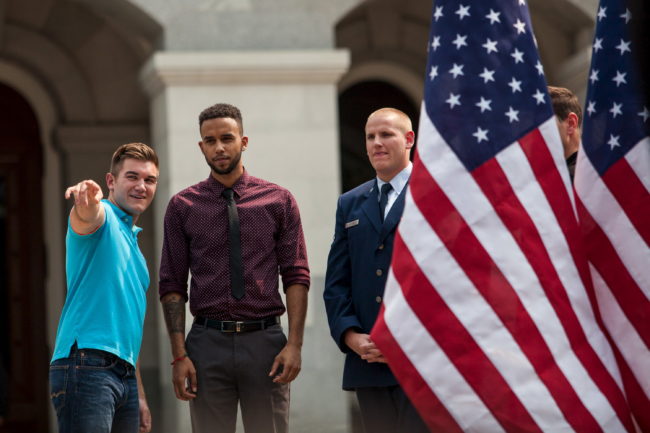 Alek Skarlatos (L-R), Anthony Sadler, and Spencer Stone, who helped thwart an attack on a French train last August, wait to be introduced during a celebration honoring them in Sacramento, California September 11, 2015. REUTERS/Max Whittaker

“Spencer, I have to talk to you ’cause this guy over here had the AK-47, Spencer, facing him,” Joy Behar explained. “The guy was ready to shoot you. And you went for it. Now, what is it in your personality that would make you do something like that?”

“A lot of people call me crazy and I think that’s a little partially true,” Stone responded. “Really in the situation, we had nowhere to go. You’re going 200 miles an hour on a train in the middle of the countryside. He’s got an automatic weapon.”

“There’s barely anywhere to run to,” he added. “So, to me at the time, it was just the best option, and I looked down the aisle and saw he was kind of fumbling with the rifle and so I said, this is our moment, we got to go now.”

“And luckily what happened? It jammed, right?” Behar asked.

“He pointed and fired at me, and the gun worked fine. It was just bad ammunition,” Stone explained.

Clint Eastwood directed the film. The three worked with the director as technical advisers on the film, until he decided to put them in the movie to play themselves.