After a tremulous first year for the Trump administration, many in the press have been predicting a “blue wave” in November. Various polls have shown a deep blue polling preference in many swing districts over the past month. However, after Trump’s State of the Union speech, polls for Republicans have begun to stabilize.

This week, an aggregation of polling data from Five Thirty Eight showed a five-point drop in numbers for Democrats nationally since Christmas Day 2017. 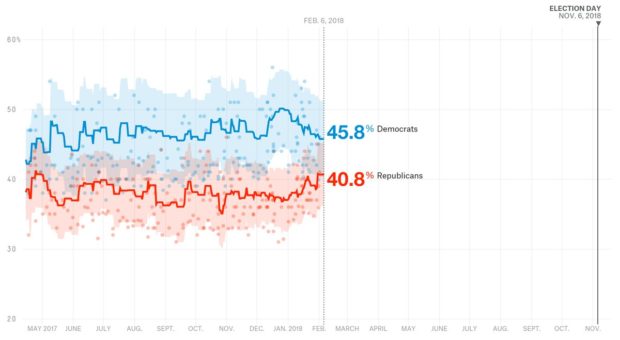 5 POINTS!!! It's early, but Dems have to be a smidge worried about this:https://t.co/e05xjwY8os pic.twitter.com/c0qiTAtYTh

The Trump administration has been using the momentum from Trump’s State of the Union to hammer on tax reform and the economy. Big legislative hurdles lay ahead for Washington, including the DREAMer legislation and funding for the border wall. Polling found that 43 percent of Democrats and a whopping 72 percent of independents approved of Trump’s SOTU speech.