WASHINGTON — Congress narrowly passed a massive budget deal that lifts the mandatory spending caps set by the 2011 Budget Control Act for two years and raises the debt limit through March 1, 2019, in the early hours of Friday morning.

President Donald Trump signed the bill around 8:30 a.m. EST Friday, re-opening the government after a brief lapse in funding that started at midnight.

The Senate passed the legislation, which funds the government through March 23, in a 71-28 vote shortly before 2 a.m after Republican Sen. Rand Paul of Kentucky delayed a vote on the bill — resulting in a brief government shutdown just weeks after a three-day closure in January. Paul refused to stop protesting the measure, citing concerns over its increase to the deficit and calling on leadership to allow for a vote on his amendment to reinstate budget caps. Exhausted-looking lawmakers on both sides of the aisle expressed frustration with the junior senator from Kentucky’s stunt, telling reporters Paul’s actions were “irresponsible.”

“It’s a colossal waste of everyone’s time, right?” Senate Republican Conference Chairman John Thune told reporters ahead of the vote. “He never gets a result.” 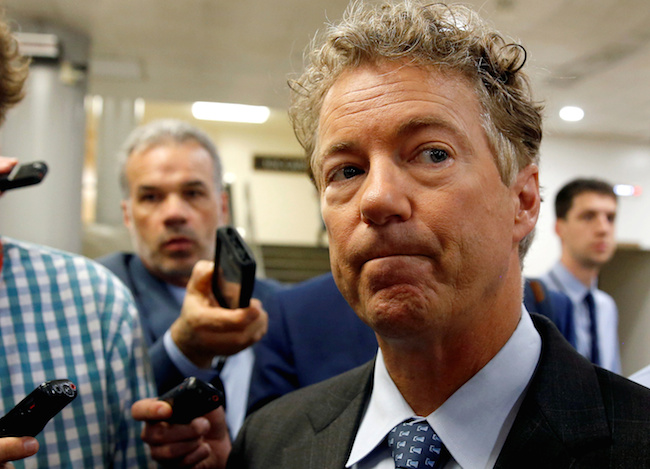 After making it through the upper chamber, it was sent to the House Committee on Rules, where it was quickly approved to be brought to the floor for debate and a vote. The House narrowly passed the bill just after 5:30 a.m. EST Friday in a 240-186 vote, with 73 Democrats joining the 167 Republicans in supporting the measure.

“We knew that Minority Leader [Nancy] Pelosi was still trying to hold out for something that she was never going to get. But at the same time, she is part of the negotiations for this deal, and a lot of her members knew that it was the responsible thing to do to get this bill passed,” House Majority Whip Steve Scalise told reporters after the vote. “And, you know, as much as we’ve wanted certainty for the military, there have been a number of their members that wanted it as well, and we found that we were able to give them that.”

Both Democrats and conservatives in the House expressed reservations, with Democrats arguing they didn’t want to support the bill without assurances the House would work on a permanent legislative solution to the Deferred Action for Childhood Arrivals (DACA) program — the Obama-era initiative that shielded from deportation foreign nationals who illegally entered the country as minors. 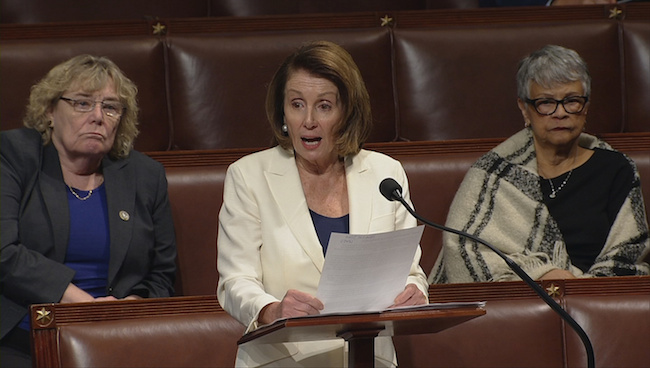 House Minority Leader Nancy Pelosi is shown speaking on the floor of the House of Representatives in this still grab taken from video on Capitol Hill in Washington, February 7, 2018. U.S. House TV/Handout via Reuters

Top Republicans — including House Speaker Paul Ryan and House Majority Leader Kevin McCarthy — asserted they are committed to working with members across the aisle on finding a DACA solution.

The bill increases defense discretionary spending by $80 billion in Fiscal Year 2018 and $85 billion in Fiscal Year 2019. Non-defense domestic discretionary would be upped by $63 billion in FY 2018 and $68 billion in FY 2019. It also puts $90 billion more toward for disaster relief, $6 billion to combat the opioid epidemic, extends funding for community health centers for two years and includes $20 billion for infrastructure projects. Funding for the Children’s Health Insurance Program was also authorized for four additional years, and it included language extending a number of tax breaks for one year.

In addition to the spending increases, the legislation makes structural reform to Medicare and makes cuts to Obamacare and eliminates the Affordable Care Act’s Independent Payment Advisory Board. Two committees to address pension and budget reforms will also be established.

Democratic leadership in the lower chamber opted to vote against the bill — arguing by passing a deal on caps they lose leverage in immigration negotiations.

“Besides the process itself, and running government month-to-month, it just doesn’t meet my standards,” House Democratic Conference Chairman Joe Crowley told The Daily Caller ahead of the vote.

Proponents of the bill — including House GOP leadership — argued its passage was necessary to end the pattern of passing stop-gap spending bills, which the military says is detrimental to its health.