Fox News contributor Stephen Miller first pointed out the discrepancy between the AP’s commentary on Trump’s and Obama’s spending plans. 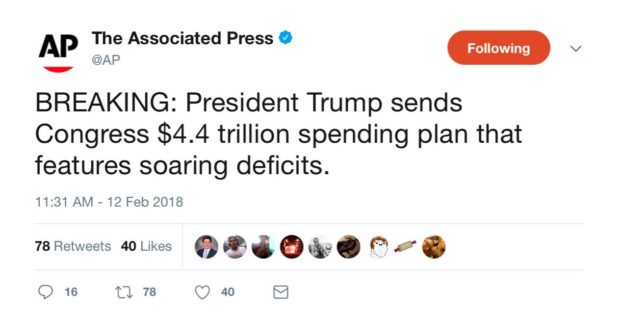 However, in their tweets about Obama’s deficit-ridden spending plans in 2015 and 2016, AP instead chose to comment on specific areas of spending from the plans.

In 2015, they seemed to praise Obama for “pledging help for middle class,” while in 2016 they noted that he would be aiming to “combat terror threats, global warming.”

PBS reported in 2015 that Obama’s spending plan would push the deficit from $485 billion to $583 billion and would never reach balance over the following decade. The 2016 spending plan projected a $503 billion deficit.