A Harvard law professor and member of the anti-Trump “Resistance” floated the false rumor Monday that a source for the unverified Steele dossier was killed in a plane crash in Russia over the weekend.

Laurence Tribe claimed on Twitter that Sergei Millian, a Belarus-born businessman alleged to be a dossier source, was killed Sunday when a Saratov Airlines plane crashed near Moscow. All 71 passengers died.

“Among those killed in the tragic plane crash yesterday: Sergei Millian, a Papadopoulis friend who had emailed Kushner and is said to be behind one of the most salacious claims in the dossier on Trump’s involvement with Russia,” wrote Tribe, who has been described as Barack Obama’s legal mentor from the former president’s days at Harvard Law School. 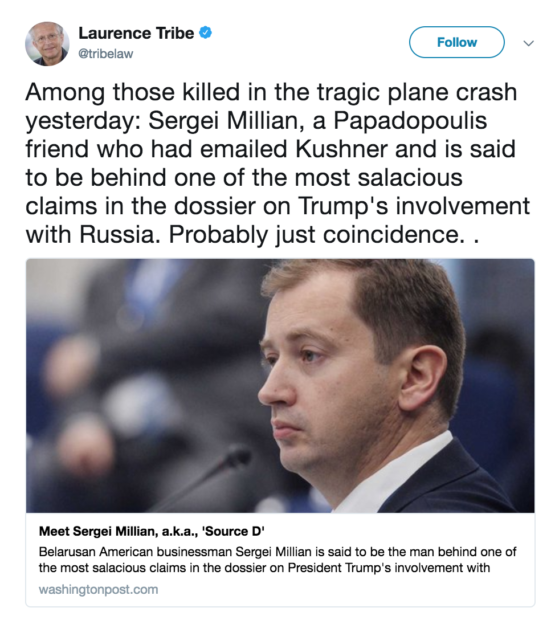 “Probably just coincidence,” Tribe added sarcastically, suggesting that the plane crash was an attempt to quiet a dossier source.

Tribe’s tweet linked to a Washington Post article from last March identifying Millian as “Source D” and “Source E” in the infamous dossier, which was written by former British spy Christopher Steele. According to the WaPo report and others, Millian was the source behind some of the most salacious claims in the dossier, including that the Kremlin is blackmailing President Donald Trump and that members of the Trump campaign colluded with Russians.

Trump and members of his campaign have denied the allegations. Millian has claimed he was not a source for the dossier, but he has avoided addressing whether he may have inadvertently provided information that wound up in Steele’s report.

During the 2016 campaign, Millian was also in touch with George Papadopoulos, the Trump campaign adviser who has pleaded guilty to lying to the FBI about his contacts with Russians while working on the campaign.

Tribe is no marginal figure. He co-wrote an op-ed for The New York Times Monday accusing House Intelligence Committee chairman Devin Nunes of obstructing the investigation into Trump’s ties to Russia.

The rumor that Millian was killed in the Saratov plane crash originated, as many rumors do, on the internet.

But as was pointed out by many responding to Tribe, the passenger manifest listed Panchenko as being born in 1973. Millian, whose real name is Siarhei Kukuts, is 39 years old, meaning he was born in 1978 or 1979.