“It’s me, Kathy Griffin — I got a haircut and I lost my career in a day. Hi!,” the 57-year-old comedian shared in the presentation for an animation award at the program that wasn’t televised. (RELATED: Rosie O’Donnell Convinced Kathy Griffin To Apologize For Beheaded Trump Photo) 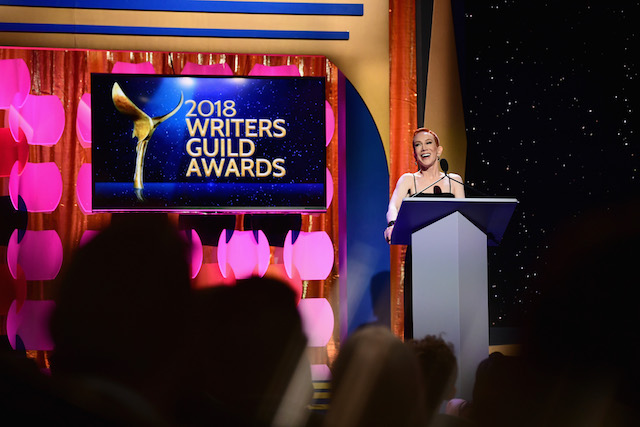 “I just want to thank all the powerful writers and showrunners in this room for f***ing no support,” she added. “Where the f*** have you been?…I was supposed to thank everyone for their support, and no one [lifted] their finger.”

“Presented at the Writer’s Guild Awards tonight. My first red carpet event since May,” Griffin tweeted after the event before adding a second post about how great she felt to “be back” after she retreated from the spotlight over the gruesome Trump photo.

Presented at the Writer’s Guild Awards tonight. My first red carpet event since May! pic.twitter.com/aM601oai91

Presenting at the Writer’s Guild Awards tonight. Feels great to be back. pic.twitter.com/QyS9YGsgY9

Initially, the comedian issued an apology for taking things too far in the photo-op with a fake severed head of President Trump. In the months since, she has repeatedly taken back that apology and continued her attacks on the president.

Shortly after the photo came out, Griffin was fired from CNN where she co-hosted the New Year’s Eve celebrations on the network with Anderson Cooper. She also lost her gig as the spokesperson for Squatty Potty.