If FY2018 federal spending were a pizza, and you ordered it with pineapple on the discretionary spending portion, none of your friends would be mad.  They’d say, “Pineapple?  That’s disgusting!  But who cares as long as it’s only on the discretionary spending part. The three of us will split the mandatory spending portion, and you can have the rest.” They wouldn’t bother making you justify the pineapple because it’s a fair split.  Mandatory spending—social security, Medicare, Medicaid— and interest on the national debt now make up about 72.4 percent of all federal spending.  On a pie chart, Mandatory spending looks like a gigantic Pac-Man gobbling up the rest of our government.

Last week, there was Conservative outcry over the amount of discretionary spending levels in Congress’ new budget deal.  Senator Rand Paul staged a mini-filibuster that shut down the government, but I didn’t bother to #standwithrand; I just went to sleep.  Wake me up when the outrage turns on mandatory spending because being outraged over discretionary spending is like seeing a hurricane blow your house down and shouting, “Oh no! I had Hot Pockets in the freezer!”  It’s like complaining that your room on the Titanic doesn’t get HBO.

Republican Politicians are fond of looking like radical penny pinchers at election time by saying things like, “If you elect me, I’m going to cut the Department of Education and the Environmental Protection Agency.”  Fine with me! That’s $79 billion. Good start but it’s not a solution to our spending problem.  That’s like taking two Extra-Strength Tylenol because you came down with a slight case of Bubonic Plague. The interest we’ll pay on our national debt this year—just the interest— is equivalent to five Departments of Education and 38 Environmental Protection Agencies. Basically, the minimum payments on America’s credit cards add up to more than our house and car are worth. 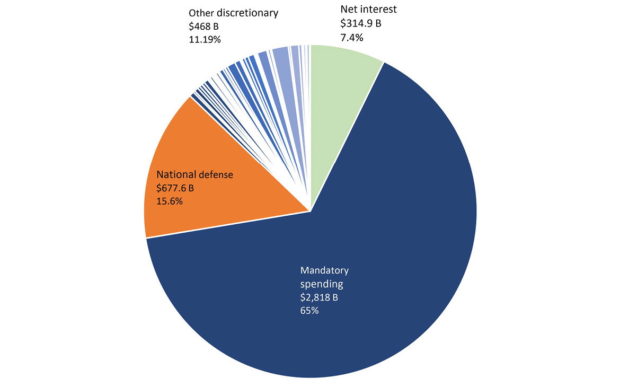 Look at Bernie Sanders’ Medicare-for-all bill last year, which was co-sponsored by 15 Democrats including 2020 presidential hopefuls like Cory Booker, Kamala Harris, Kirsten Gillibrand, and Elizabeth Warren. The Washington Post editorial board said that plan would cost an extra $3.2 trillion a year!  That’s three times the cost of operating our entire federal government.  They would have to double everyone’s taxes to afford it. Imagine what the movie Jaws would be like if, instead of killing Jaws, Roy Scheider fed him bucketfuls of steroids.  That’s the Democrats’ solution to the mandatory spending problem.  Mandatory spending is a “real” problem.  If you’re a kid with a Che Guevara t-shirt and a “Feel the Bern” bumper sticker who doesn’t know what a “real” problem is, here’s a cheat sheet I whipped up for you:

Fake Problem: Ben Shapiro is coming to my school to say stuff

Fake Problem: Trump wants to have a parade

If modern politics must revolve around victimhood stories, I have good news: we are all victims of the Democratic-Socialist Ponzi scheme known as Social Security.

What is a Ponzi Scheme? It’s that scam Bernie Madoff ran. Fooling people into investing in a non-existent enterprise by using the money of other investors to pretend there’s a big return.  It’s like paying to fund an expedition to the end of the rainbow, crossing your fingers that you’ll get a slice of those Leprechaun gold dividends.  Because the enterprise you’re investing in is pretend—Leprechaun gold, Unicorn shoes, social security— the money runs out and everyone who got in late is left with empty pockets.

Since the day I started working, part of my hard-earned money has been handed over to the government to hold onto for me until I need it. They don’t even invest it!  They use it to pay off the old investors.  When I got my first ever job, the DOW was at 5,000.  Today, it is at 24,000.  Too bad the government didn’t start me a 401K with my money!  Instead, I’m left to hope and pray that the fairy dust market will appreciate.

Mandatory spending, especially Social Security, must be reformed.  This year, over $3 trillion of our taxpayer money is already spoken for before we fund anything, and that number keeps going up.  Meanwhile, our actual government is running on about $1 trillion— the same amount as Social Security payouts.  This is socialism in action, and—if nothing is done— it will eventually destroy our country.