Birchwood Casey has been supplying shooters with cleaning products for their firearms and other metallic gear for as long as I have been shooting. About the time I went to my first SHOT Show some twenty years ago, they introduced their hi-visibility targets using bright white backgrounds with sharp blacks, reds, blues which were easy to see out to twenty five to fifty yards. These are still made today and shooters till love them. Now with SHOT in full swing it is time think about getting out to the range, soon it will be shooting season.

A couple years later the Shoot-N-C Targets was introduced. This target revolutionized targets. It is a traditional yellow or orange target with a special paint over the impact area. When hit the hole pops a bright orange or yellow. These targets made seeing 22LR holes at 25 yards possible without the need for optics. Over the years pink has been added to the scoring zone. The black has improved and now most folks can see 9mm/30Cal hits at 50yards. Aside from the “bursting” color, the other draw of Shoot-N-C Targets was they are self-adhesive targets. These were/are revolutionary targets, they make zeroing optics and testing long guns a snap; I swear by them.

A couple years later Birchwood introduced the Dirty Bird line. These targets tend to be more traditional because you have to staple or use spray adhesive to hand them. However they use the “splatter” technology of the Shoot N Cs.  The Dirty Birds have blue, pink, red, black, white scoring areas that all pop when hit. These are my go to targets for testing handguns or when practicing for three gun and three gun competition because Dirty Birds are offered in USPSA/IPSC target shapes. Because of the polymer coated paper and the fact you staple them up, Dirty Birds are much better in wet, snowy weather.

At the 2017 SHOT Show, BC introduced two traditional paper targets that are a must have for competitors, armed professionals, those who are carry for self-protection and trainers. The EZE Scorer Circle Drill and Multiple IPSC Targets allow shooters to practice precision, target identification, and transitions on one 23’X35” target. This is a big benefit when you have limited target space. The small IPSC targets will let you practice and feel like you are shooting at greater distance than you are. These are much like the military scale qualification targets we used training with M16s; they worked then and now. Folks at my club like both targets because two folks can easily shoot one “page.”

If your range is like mine once was, a strip mine you need target stands. Freedom Targets is the key. These are cardboard frames that fold up or down. I have been using the extended unit that comes in the Double Stack Kit to prevent ground impact ricochets. This target sets about 5’ tall at the shoulder while the short on is literally target size 20”X35”. The target backer portion will allow you to staple or stick any self-adhesive target to it. While you can set a rock on the base, be advised these targets/stands are simple folded cardboard and will not survive wind or rain. The $25.40 kit comes with 2 backers, 2 bases, 1 pair of tactical extenders, and 2-8”/2-12” Shoot-N-C Targets so you are ready right out of the package.

One area Birchwood Casey has taken the industry by storm is with their World of Targets Steel Targets. This line of targets has brought affordable, one man portable, quality competition grade AR500 steel targets to shooters. The quality and man portable are the big selling points. If you shoot approved action steel you know it is heavy, expensive and far from single man portable. This means unless you have your own range you don’t practice much shooting on steel. The World of Targets Steel all weigh less than 30 pounds so you can easily set it up. When shooting steel, make sure you are far enough from the steel not to get hit with ricochets.

Shooting steel has many benefits it helps you improve your trigger speed with instant feedback. To improve in action shooting you must know you can hit a US or Pepper popper or a 12” steel plate on demand. Shooting paper plates is not the same and at 200 yards you do not get the feedback, the “thwack” of the bullet impacting steel.

The first piece of rifle rated (non-magnum, realistically .223,.308,.300blk is the max) steel from Birchwood Casey that came out in 2015 was the Boom Slang Gong Target. This target is a hanging 9.5” gong with its own hanger that sticks into the ground. The only time this target does not stick in the ground is when it is solid from freezing/drought or oozing mud. Other than that I have used this target with my handguns as close as 10 yards, AR as close as 25 yards and the steel has not dimpled or deformed. I like the back and forth swinging because it forces you to acquire the moving target, a skill that comes in handy shooting paper swingers, bobbers or other moving targets. The Boom Slang Gong is well worth the $155.60.

Next B.C. introduced the $223.40 Mule Kick 15.5” plate. With an “H” base this target is ideal for any and all weather. It is my go to target for practice with the AR at and distance over 100 yards. I have regularly shot this target with my .308 Springfield M1A at 200 yards and have not seen any damage to the steel. For carbine work when practicing for three gun matches, this is my go to steel it sets high enough off the ground it is easy to see from the prone position and is light enough to set-up behind walls or on hills to get practice shooting obscured targets at distance. If you shoot a lot of 30 caliber and could only have one target this is it.

Last year’s addition to the World of Steel Targets was the $306.50 22”tall, 8” circle Popper Steel Target. This is a much smaller than official action shooting target, but it is ideal. This target requires assembly, the legs secure to the base with a bolt, and the swinging popper attaches to the base with a pin/cotter pin lock. You will find an anchor stake in the package, but odds are you will never need it. I have put hundreds of 9mm rounds on this target out of pistols and pistol caliber carbines at ranges as close as 25 yards and .223 at 100+ yards. If you only have room for one steel target this or the Mule Kick would be it for its versatility.

As you can see Birchwood Casey is working hard to bring shooters all varieties of targets to make you a better shot and to keep shooting interesting. I have been shooting all of these targets for a long time and cannot recommend them enough. 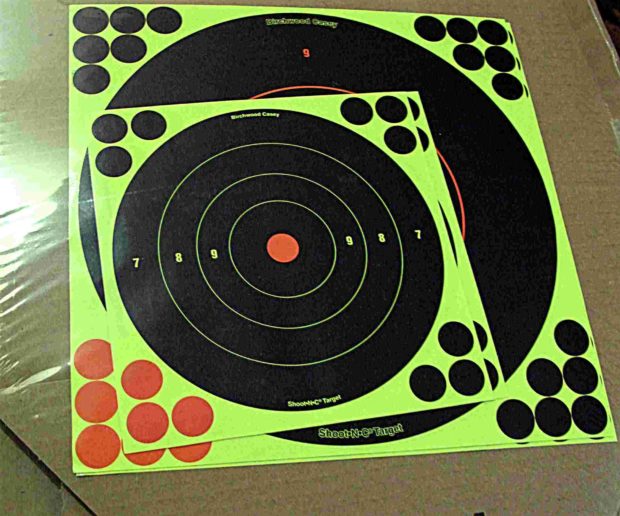 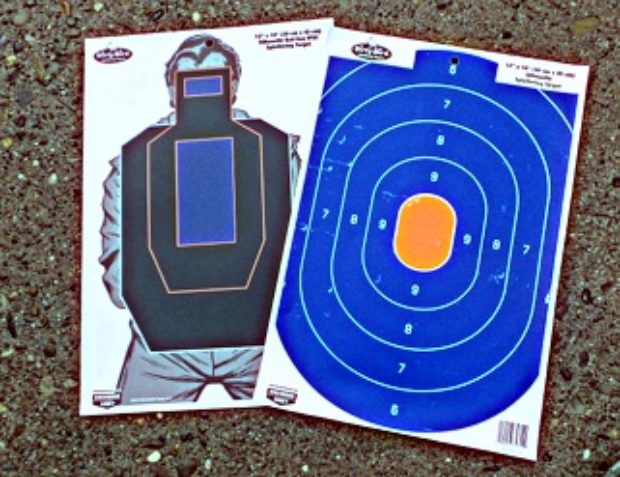 These are two of the Dirty Bird 12’X18”targets in the Combo Pack with 4ea IPSC Bad Guy and Silhouette Targets. When the IPSC center is hit its red while the silhouette pops white. 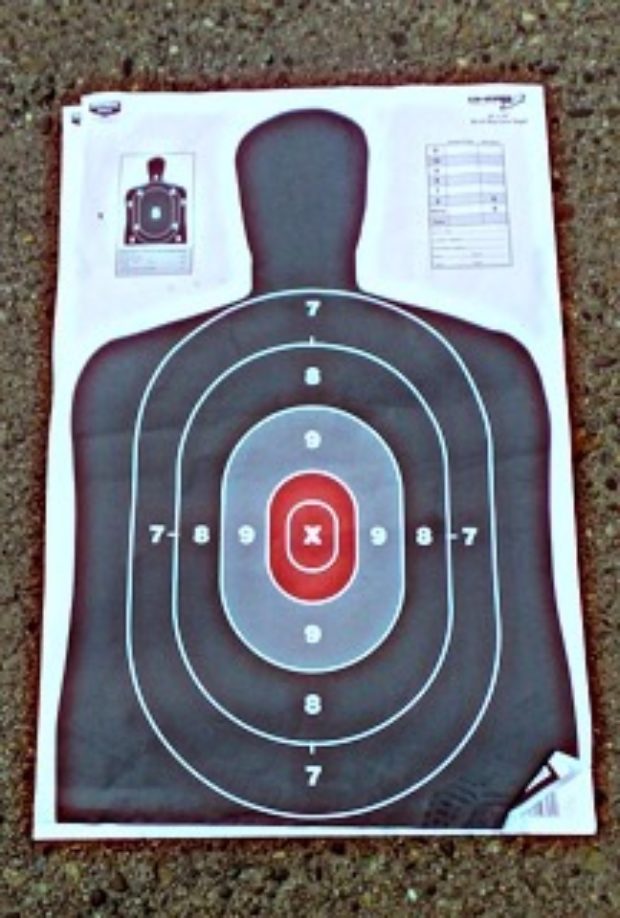 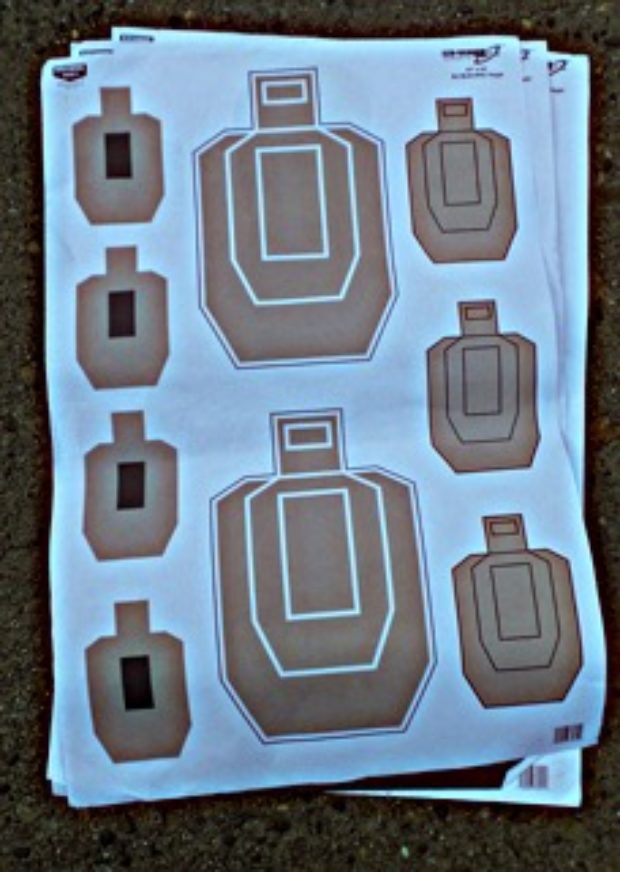 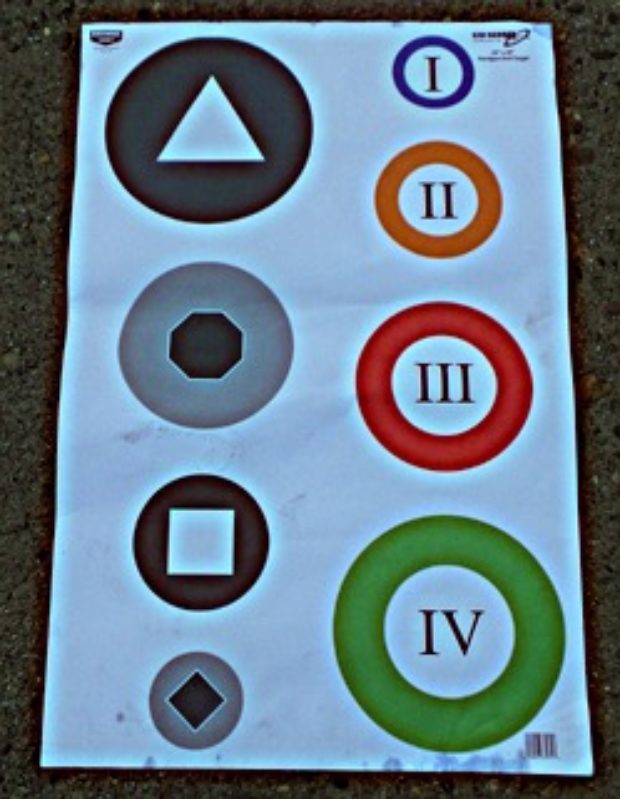 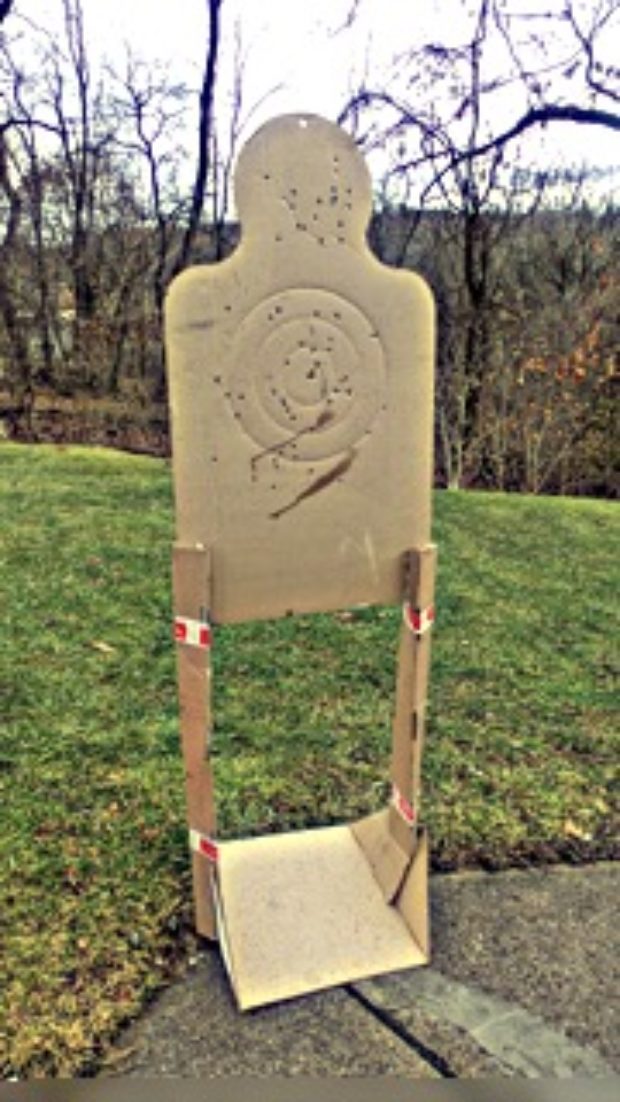 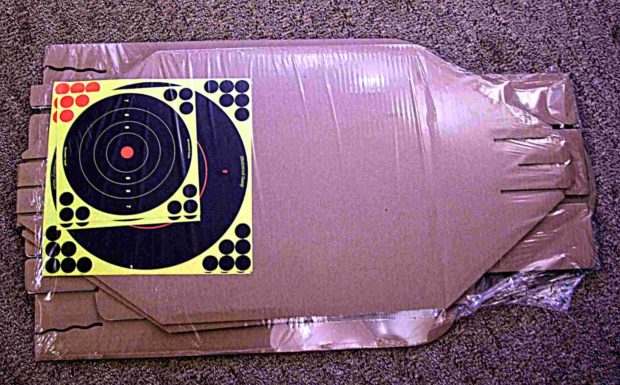 Freedom Target Kit with tactical legs installed and in the package; builds a range wherever you have a safe legal shooting area. 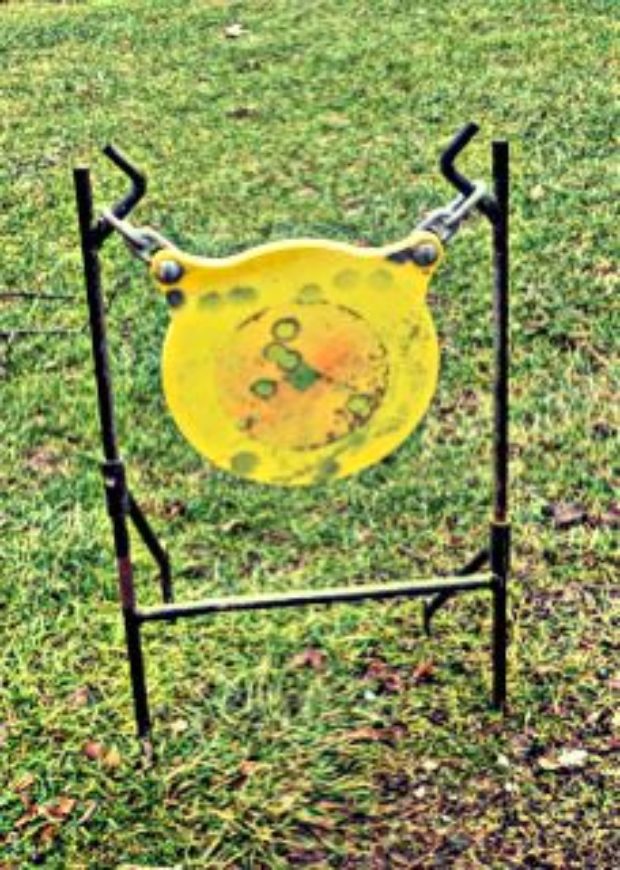 Boom Slang Gong, it a versatile compact steel target for most plinking or practice for action shooting. 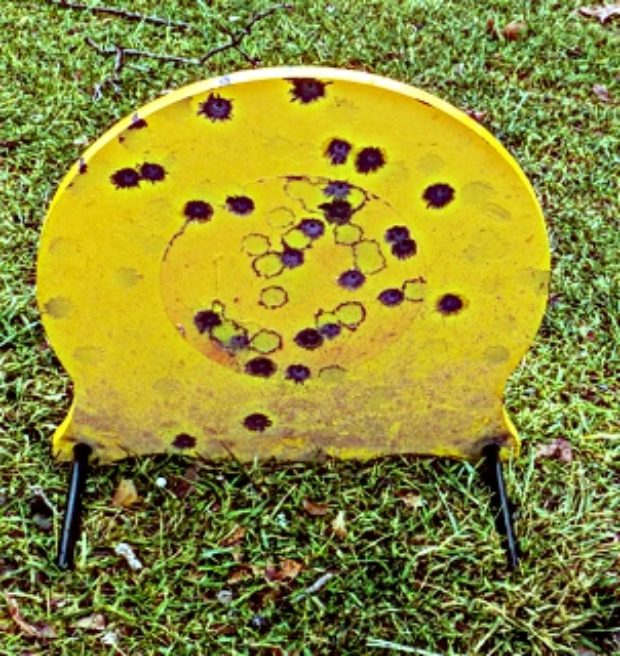 The Mule Kick is the heaviest duty of the World of Target Steel that can be used in any conditions and safely with .308Win rounds at 200 yards. 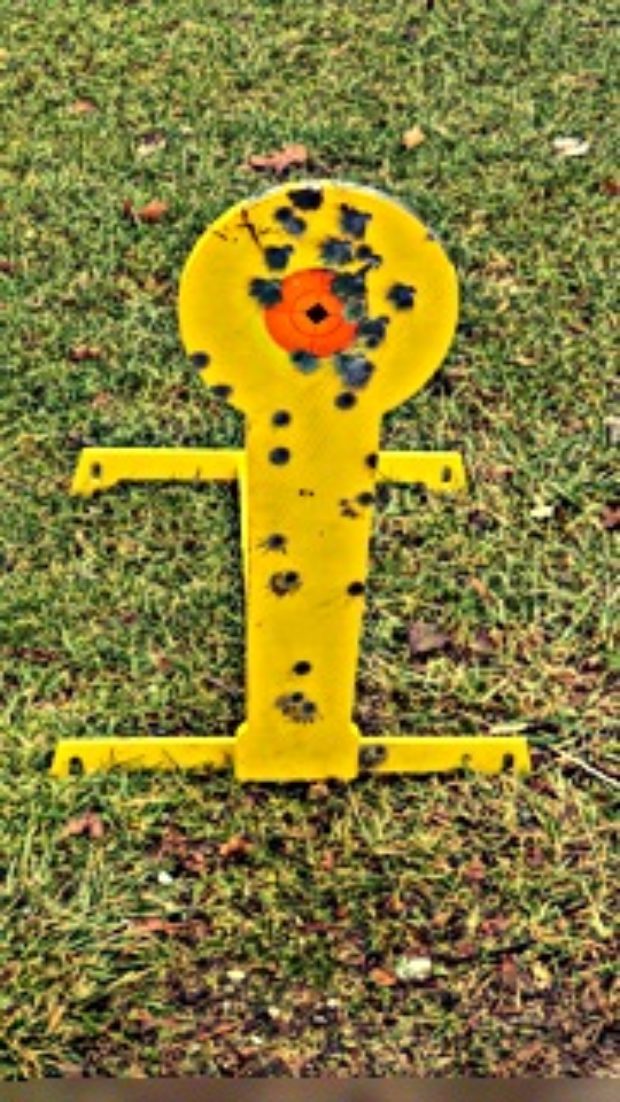 The Popper Steel Target will enhance your skills will your handgun, pistol caliber carbine or .223 Rem AR if you shoot it at 200 yards. 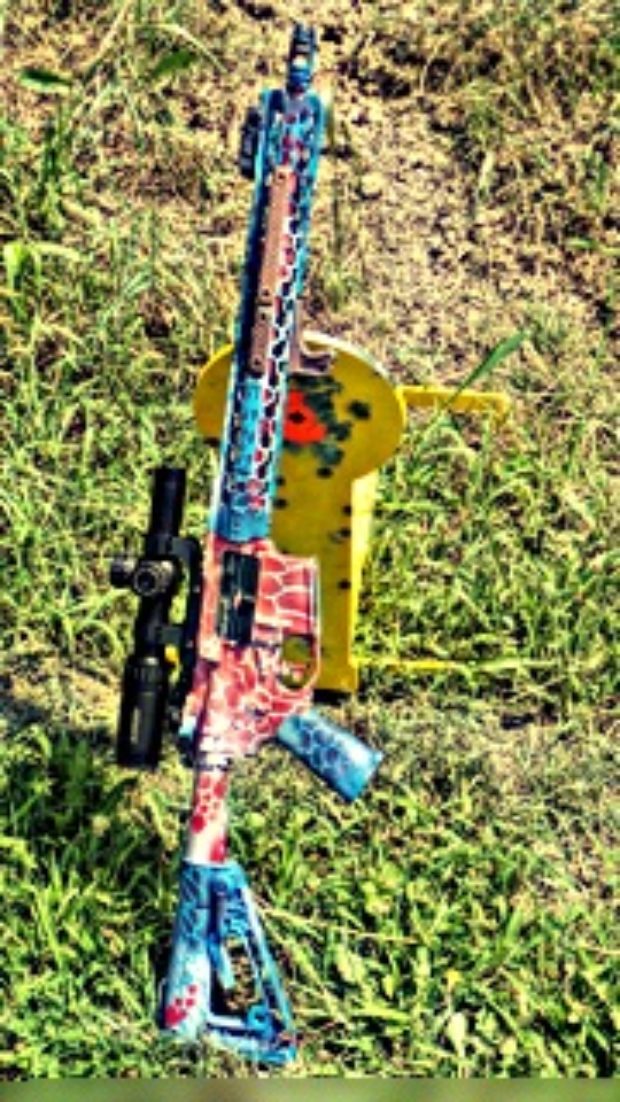 Scott Smith is a Disabled Veteran serving in the Army and USAF Reserve. He has been a federal police officer, is a charter member of IDPA and is actively involved with USPSA and various three gun competitions.