President Donald Trump went on a scorched-earth tweetstorm Sunday morning calling out a number of major political issues and enemies.

Trump focused on the “vindication” of his campaign in the Russia investigation, rising GOP poll numbers and CNN’s cratering ratings. However, Trump,  who is very fond of nicknames, saved his most savage barb for Adam Schiff. (RELATED: Trump: ‘They’re Laughing Their Asses Off In Moscow’)

Schiff is the ranking Democrat on the House Intelligence Committee and has served as a thorn in the side of the Trump administration. Schiff has regularly been the point person pushing the narrative of the Trump campaign colluding with Russia to sway the 2016 election. The investigation is prone to information leaks that often are intended to make the Trump’s look bad.

Finally, Liddle’ Adam Schiff, the leakin’ monster of no control, is now blaming the Obama Administration for Russian meddling in the 2016 Election. He is finally right about something. Obama was President, knew of the threat, and did nothing. Thank you Adam! 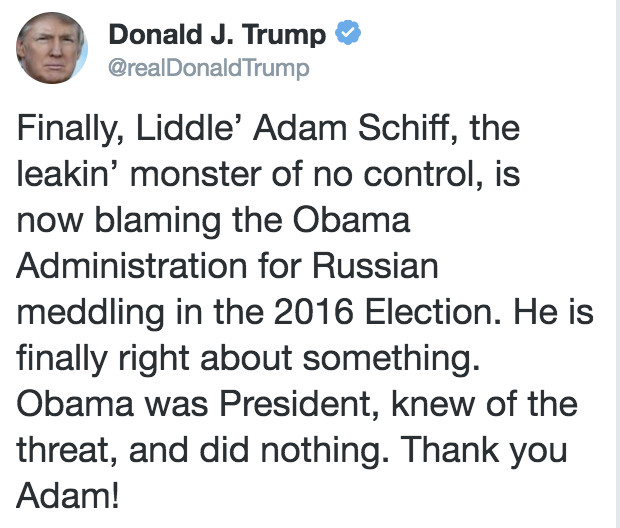 Schiff recently said in an interview:

We should have called them out much earlier. While I respect the motive in terms of the Obama administration, they didn’t want to be seen as meddling, the American people had a right to know what was going on and could be trusted to do the right thing with it. And they should have defended being more public and aggressive at the time, at least in my view.