Donald Trump on Tuesday weighed in on CNN and MSNBC covering anti-Trump rallies which were organized by Russian trolls.

It was revealed last week that Special Counsel Robert Muller would be charging 13 Russian nationals in attempting to meddle with the American election. The online activity of the Russians included support for Trump and Bernie Sanders, along with a large amount of disinformation.

It was also revealed that the Russian trolls organized anti-Trump rallies after the election  in multiple cities.  These Russian-organized anti-Trump rallies were attended by high-profile stars like Michael Moore and covered by major cable news outlets like CNN and MSNBC.  Large portions of daytime coverage were given to the rallies, according to research done by the Media Research Center.

In his tweet Tuesday evening, the president attacked the liberal-leaning networks for covering the fake Trump rallies and said they most likely did so knowing that they were “Fake News.”

Bad ratings CNN & MSNBC got scammed when they covered the anti-Trump Russia rally wall-to-wall. They probably knew it was Fake News but, because it was a rally against me, they pushed it hard anyway. Two really dishonest newscasters, but the public is wise! 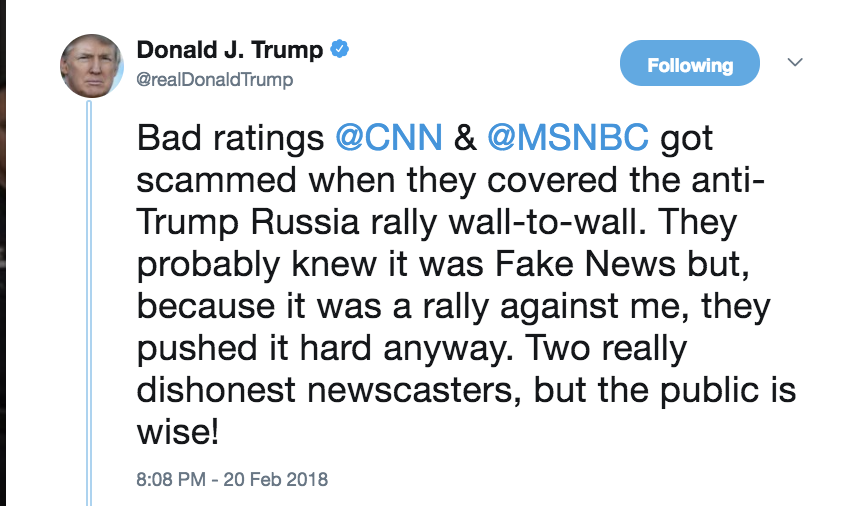 According to MRC reporting:

“A check of their November 12 coverage showed both CNN and MSNBC gave enthusiastic coverage to the Russian-organized anti-Trump rally that day, with live reports every hour. Correspondents celebrated the idea that it was “a love rally,” and repeated the marchers’ anti-Trump mantras, such as: ‘We reject the President-elect.’”