The folks running CNN must have missed the irony when they dispatched a reporter to traipse across a Florida lawn and publicly shame an elderly woman on the world’s most syndicated news channel.

Not that I believe Russian political incursion is pointless to investigate, but there seems to be a startling lack of proportion. After all, aren’t the sirens sounding at America’s elite news network infinitely more valuable to Russia than some woman’s Trump fan page?

CNN — a multi-billion dollar, global media behemoth — has been rousted into a dead sprint to aggressively lobby America’s government and its most lucrative sector, Silicon Valley, to rein in the free flow of information, fake or otherwise, to be more in line with the sensibilities of its anchors. Meanwhile, those same anchors tell viewers that the real result of Russian disinformation is stuff like a completely unknown woman who held a relatively unnoticed rally with a handful of friends.

The woman in question, Florine Gruen, ran a rather shoddy pro-Trump Facebook page that apparently, at the urging of Russian operatives posing as American patriots, promoted a rally supporting then-candidate Donald Trump. The rally drew an astounding tens of people, mostly on the older side. They waved signs on the side of the road and went home.

For the highly-paid, powerful folks at CNN, Gruen and her completely forgotten rally represent the front line result of Russian disinformation.

Here’s the Russian ad she supposedly ran “word-for-word,” as CNN’s Drew Griffin pointed out while heroically advancing on a visibly confused Gruen. 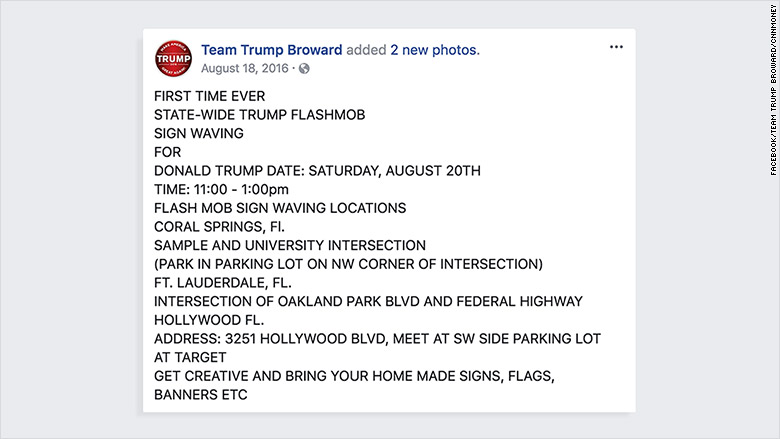 As if to exemplify CNN’s obliviousness, Asha Rangappa, a former FBI special agent CNN hired to coo softly into America’s ear about secret surveillance courts, pointed out on Twitter about Griffin’s video: “How was Russia successful in its disinformation campaign? Exhibit A.”

She was referring to Gruen’s own apparent lack of awareness, while completely missing how her own network is dancing on the tip of Putin’s finger (indeed even “unwittingly” amplifying the results of his propaganda). 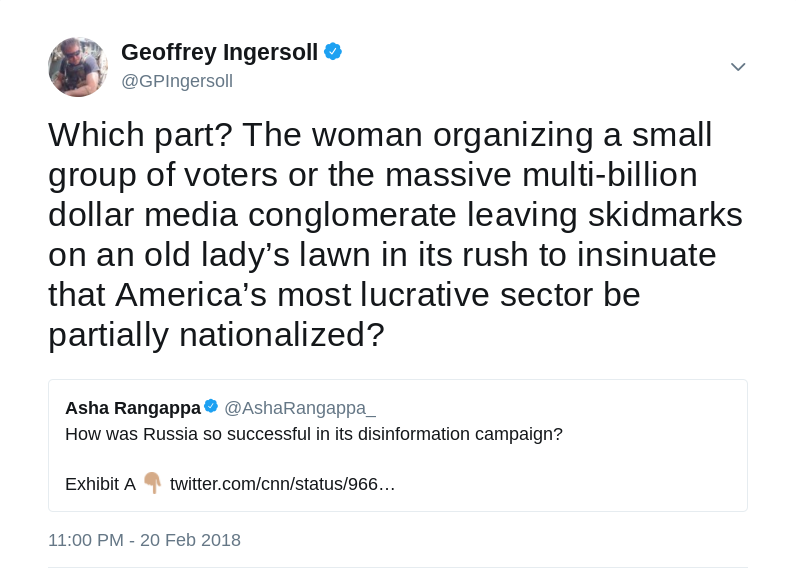 To make matters worse, CNN’s entire jihad is predicated on the stipulation that Russia’s social media campaign was effective at swaying the public — an assertion that countless experts, contextual studies and Facebook’s own execs have time and again disputed.

Here’s The New York Times, itself a beneficiary of the fake news jihad, blaring “‘Fake News’: Wide Reach but little impact, Study Suggests.” Here’s a Think Progress reporter who specializes in open-source analysis throwing major shade on the efficacy of Russia’s efforts. Here’s The New York Times again, but this time shaming a Facebook exec for saying what everyone at this point already knows about how Russia influence on social was nominal at best.

Adrian Chen, America’s foremost reporter on the Russian troll farm that propagated these posts, recently appeared on MSNBC and said the obvious:

If you think about that in terms of just a normal marketing campaign, that’s not going to be a very good bang for your buck.

That’s when Chen gets to the truly terrifying part. He continued by noting the “paranoia” Russia generated, clustered most acutely among American elites, was the most troubling aspect of the whole operation.

“That is a very powerful thing that is going on and is really increasing now in the wake of these indictments in kind of a worrying way,” he concluded. “There’s not a lot of people saying ‘let’s hold back, maybe it’s not that big of a deal.’”

To this end, CNN and MSNBC have employed a number of former intelligence operatives to help them find the culprit.

Ray Bradbury saw the marriage of state and media coming decades ago. His “Fahrenheit 451” imagined a world in which mass media teamed up with government to police the published word. In the book, at one pivotal moment, Bradbury described a government manhunt the media happily takes a hand in broadcasting and directing.

When the security forces can’t find their true culprit, they literally turn on a random person.

“The camera, hovering in the belly of a helicopter, now swung onto at an empty street,” he writes. 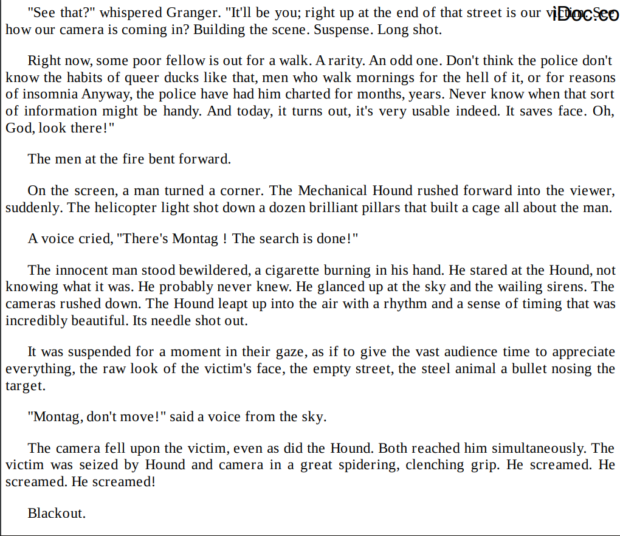 They descend on a random. An innocent person who “stood bewildered.” She “probably never knew.”

“As if to give the audience time to appreciate everything, the raw look of the victim’s face.”

And the culprit they found?

1
15 People Died In The Protests And Riots Following George Floyd's Death. Here's Who They Are
US
2
'This Is A Sham': Tucker Blasts Health Care Professionals Who Signed Letter Exempting George Floyd Protests From Coronavirus Restrictions
Media
3
82-Year-Old Attacked For Holding A Trump Sign Gets Emotional When He Receives A Call From Donald Trump Jr.
US
4
Things Got Heated On 'The Breakfast Club' When Rush Limbaugh Called 'White Privilege' A 'Liberal Political Construct'
Media
5
Trump Orders Thousands Of US Troops To Leave Germany
World