Jacking up a 13-bedroom cabin from its foundation to retrofit underground luxury men’s and ladies’ locker rooms, fitness center and sauna within a nine-month timetable shows the real chops of Griffin & Howe CEO, Steve Polanish and his predecessor Guy Bignell as their Hudson Farm sporting grounds fulfills its new calling: “How a Legacy is Crafted.”

But the legacy under consideration here doesn’t only concern paying customers. It impacts Griffin & Howe – the fabled American gunmaker started in 1923 by Seymour Griffin and James Howe in lower Manhattan, purchased by Abercrombie & Fitch in 1930, and over time developed a blue-ribbon client list of Ernest Hemingway, Clark Gable, Gary Cooper and Jack O’Connor who all demanded rugged, beautiful rifles for their African safaris. It impacts the Wall Street visionary who owns Griffin & Howe and the Hudson Farm Club. It impacts members of the Hudson Farm Club. And it impacts Mr. Bignell and Mr. Polanish. 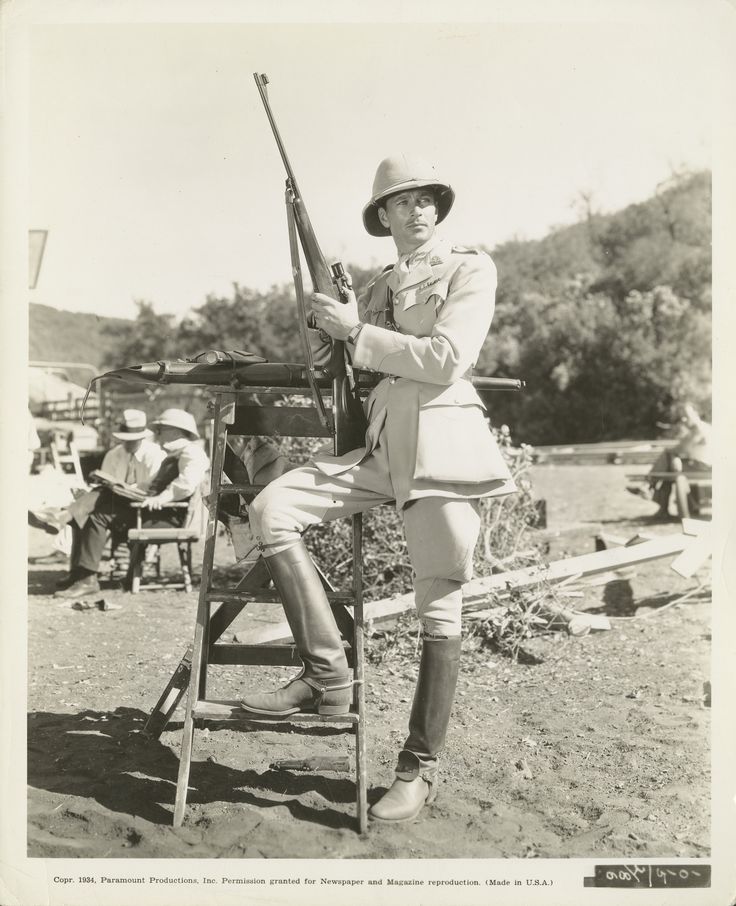 Actor Gary Cooper on a film set with a Griffin & Howe rifle.

The expansion and renovations of Griffin & Howe at Hudson Farm are intended to endure for generations and exemplify an eco-friendly, luxury sporting way of life. The undertaking serves as an enlightened model for the company’s future, integrating an expanded gunroom and showroom emphasizing lifestyle amenities.

The approach serves as a road map for the shooting industry in general with the adoption of green energy, organic food, responsible wildlife stewardship and a foundation that supports local charities.

Over the years, the woodsy sporting clays course has expanded into the hills, a long-range rifle range was installed and then enlarged, the gunsmithing and retail operations of Griffin & Howe were consolidated onto Hudson Farm, nearby property was purchased, plus other projects now under way have contributed to the grandness of the Hudson Farm experience.

The rear view of the Hudson Farm estate house, which has expansive views of the surrounding wooded landscape and a helicopter pad.

It started in 1997 with the three-year, preservation-minded refurbishment of the original Hudson Farm 1911 dairy-farm house into an opulent members-only lodging with nine bedrooms, dining room and the large North Hall chalet addition for entertaining and lounging around. The estate house has its own legacy. In 1904 railroad magnate John P. McRoy commissioned the New York architect Clarence Curter to design it. The property operated as a dairy farm until 1920 when it was donated to The Hudson Guild, which ran it as a fresh-air camp for New York inner-city eastern European children. On July 10th 1921, creation of the Appalachian Trail was conceived in the house.

One particular challenge was preserving the integrity of the private Hudson Farm Club with the commercial operation of Griffin & Howe on the same piece of property. 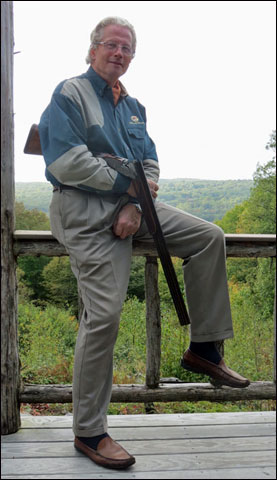 Guy Bignell on one of the Hudson Farm Club sporting clays stations.

The importance of legacy has gained prominence as Griffin & Howe approaches its 100th anniversary in 2023. For the principals, Griffin & Howe’s centennial marks a turning point into a future that converges on ecology, commerce, the sporting life and technology. The ongoing investments have certainly gained momentum to the extent that some undertakings serve as a test bed – a laboratory of sorts – to ensure the quality of its immersive sporting brand endures in a world of capricious change. 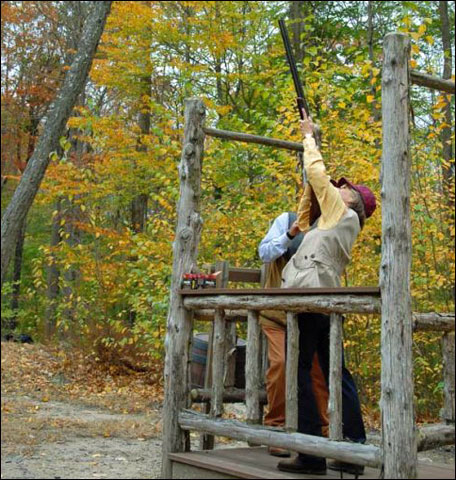 “For years I had always been very active in taking people to the Hudson Farm Club – clients who purchased shotguns and rifles who wanted to be exposed to our shooting instructors,” said Mr. Bignell. “And then subsequently taking them to the next level – taking them shooting in England – trained with specific targets there with flurry area for shooting driven pheasant. The Hudson Farm Club became a proving ground and school for introducing Griffin & Howe clients to the sporting lifestyle.”

In retrospect, there were two starting points that, after years of planning and construction, ultimately converged in 2015. The gunmaker and outfitter Griffin & Howe was purchased by the current owner in 1986. Nine years later he bought the original 550 acres that comprised Hudson Farm in Andover, New Jersey, which is about a 90-minute drive south from Midtown Manhattan, to accommodate the company’s shooting school. 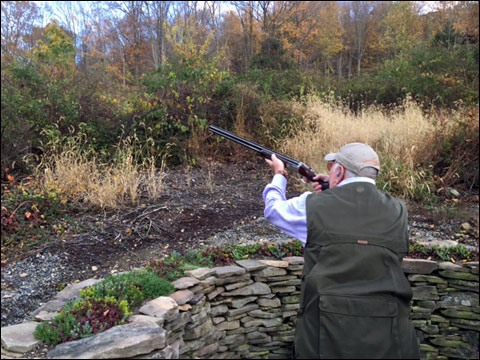 The author on the Hudson Farm Club sporting clays course.

Over the years more property was added to the farm until it reached the current 4,000 acres. Along the way, the Hudson Farm Club received awards for agriculture, forestry and wildlife management. By 2015, a strong business case had been made for consolidating Griffin & Howe’s showrooms and gunsmithing operations in Greenwich, Connecticut and Bernardsville, New Jersey at the Hudson Farm Club.

“It was not necessarily a plan, but a series of optimizations,” explained Mr. Bignell. “There’s a plan and it kind of morphs every year or so with new ideas. The whole complex evolved. It’s not something that we sit down and say this is what we want to be in five years. It all combined on one piece of property as a long-term wanton wish.” 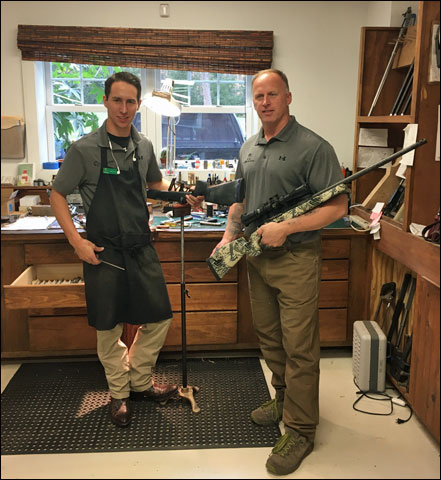 Over their 20-year relationship Mr. Polanish and Mr. Bignell pooled their respective strengths in construction, project management, customer service and sales. It could be easily argued that Griffin & Howe at the Hudson Farm Club is as much their vision as the owner’s.

“I focused on the logistics at the Hudson Farm Club to make it all happen while Guy was still running Griffin & Howe,” said Mr. Polanish. “We worked hand in hand to do it.” 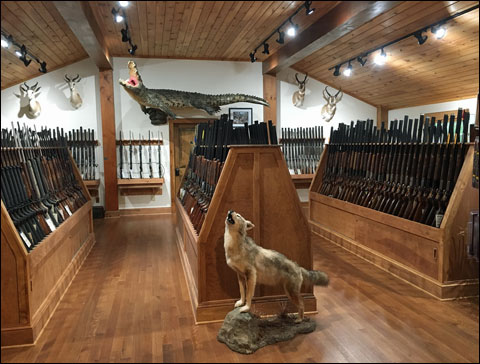 The new gun room at Griffin & Howe at the Hudson Farm Club.

As Mr. Bignell put it, “You have historical and iconic entities that have come together in their coexistence. The Hudson Farm Club without Griffin & Howe would not be the exciting vibrant place it is today. Griffin & Howe has taken people who have had no previous experience in the country lifestyle and we’ve been able to give them that experience: how to shoot, what to wear and where to go. We’ve given members a whole new lifestyle.”

Key to the success and long-term development was Mr. Polanish’s foresight to fully integrate tradesmen into the organization. Need a new gun cabinet? He tapped the on-site carpenters. Need to expand the sporting clays course? Their grounds crew is at the ready. Need to manage the bear and deer populations? Experts are already there.

A sporting clays station at the Hudson Farm Club.

You may not picture Andover, New Jersey in the northern part of the state, as being carpeted with forested hills, but one prominent example of deference to the environment is the sporting clays course at Griffin & Howe at Hudson Farm. The project began in 1999 with 13 stations at the base of the hills, and was incrementally expanded to 30 stations snaking up into higher elevations. A few enclosed stations for all-weather shooting lessons are painted to blend into the surroundings. It’s a PVC-free zone – the stands built from nearby tress. Driving up the paths some stands completely blur into the hills. The trap machines throw black biodegradable targets whose pieces are nearly invisible on the ground. The course is entirely eco-friendly and run fully on solar power. 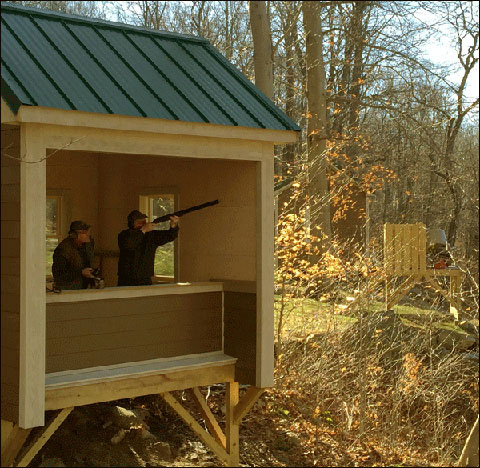 An all-weather sporting clays station on the Griffin & Howe School.

For clays instruction, the course is the primary staging area for the Griffin & Howe Shooting School. The curriculum is inspired by the Churchill instinctive method of wingshooting. The sporting clays presentations, of varying difficulty, are augmented by a 100-foot tower for simulated driven pheasants. We got a first-hand look as Mr. Polanish drives us around Griffin & Howe at the Hudson Farm Club in a Polaris cart. He’s certainly no prima donna – running quick errands along the way. 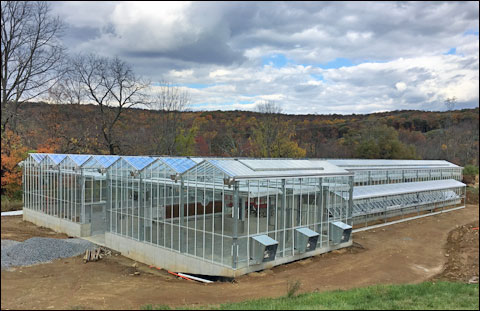 One of our early stops is downright surprising. It’s actually a 7,000-square-foot greenhouse that is nearing completion. Mr. Polanish explains that it uses water-saving hydroponics growing methods. Griffin & Howe at the Hudson Farm Club is cooperating with a local group that supports people with Downs Syndrome to give them jobs there producing flowers and food for the facility for farm-to-table fare. Any surplus will be sold to local restaurants.

Next stop is the 6,000-square foot state-of-the art gunsmithing and gunmaking operation. Housed in a recently completed 15,000-square-foot barn-type structure, the builder performed extensive testing and computer modeling to maximize construction material efficiencies, including a solar-panel array. Two farm buildings were demolished to make way for it. An old, decaying silo was rescued and modernized. Mr. Polanish speculated that the unique space may be converted into an employee lounge area. From there you can see the new dog kennels for Hudson Farm members and guests.

In designing the gunsmith’s benches, Mr. Polanish said he adopted a German methodology that formulates the amount of natural light to balance energy efficiency, eye comfort and ultimately product quality. He also designed the benches to be ergonomically efficient for right- and left-handed technicians.

For Mr. Polanish the gunmaking shop drives Griffin & Howe’s new axiom “How a Legacy is Crafted.”

Known for traditional shotguns and bolt-action rifles, Griffin & Howe took a radical departure in 2015 when the first proprietary long-range rifle emerged called the “Long Range Precision Rifle.” Resembling a military sniper rifle more than the dangerous game guns that made Griffin & Howe famous, that in-house piece of modern technology proved the viability for similar, military-grade, high-powered firearms bearing the Griffin & Howe name. The new hand-crafted, Highlander Rifle is built on that stainless-steel architecture with light-weight carbon-fiber barrel and stock in Gore Optifade patterns with a starting price of about $5,500.

Need to sight-in the rifle? Up the hill is the 850-yard rifle range. But the rifle range also serves The Griffin & Howe Rifle Marksmanship School. The sprawling parcel is equipped with realistic animal size targets, both stationary and moving, in addition to metal reactive targets and electronic Oakwood Control targets. 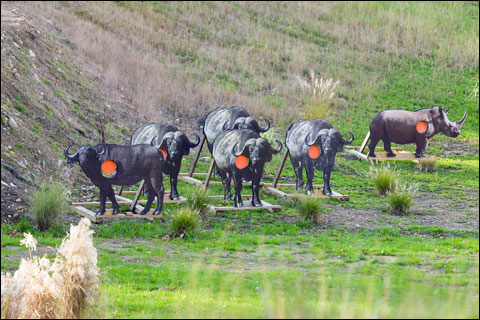 A shoot house is designed with sound acoustic walls, ceilings and flooring, a fully heated classroom and outside shoot house, shooting benches for both left and right handed shots, imitation rocks to simulate shooting from difficult positions, in addition to open stalls for shooting prone and with the use of shooting sticks.

“Our new All American Rifles are one-hundred-percent American-made,” said Mr. Polanish. “Griffin & Howe is building on our American legacy.”