A college in California is offering a class that will mainly focus on removing President Donald Trump from office, according to a report.

San Diego State University is offering a one credit course in March called “Trump: Impeachment, Removal or Conviction?” taught by Professor John Joseph Cleary, first reported by Campus Reform. The universities Criminal Justice program is offering the course, which will cost students $221. The only required reading for the course is “The Case for Impeachment” by an American University professor who makes the case for impeaching Trump.

“Focus will be on the two constitutional grounds: impeachment and removal (25th Amendment), and the possible charges of the independent counsel.” The course will also cover “grounds for impeachment, removal, or indictment” such as “conflict of interests, foreign emoluments, climate change, racism, religious bias, improper influence, nepotism, and a host of crimes, including conspiracy, false statements, and obstruction of justice.” 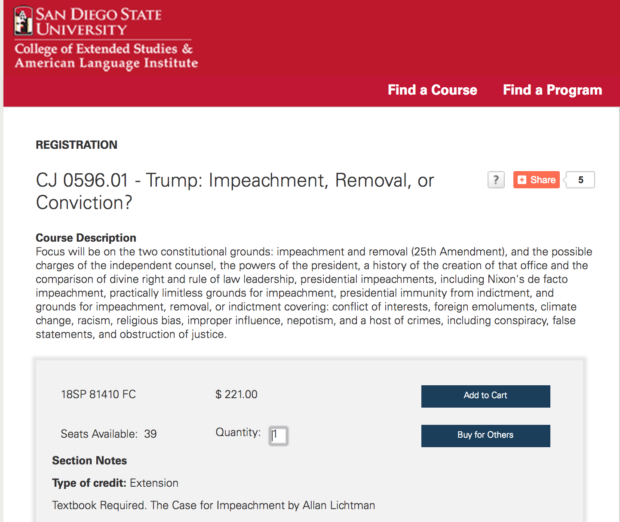 The university claims the course is not focused on just Trump but will review all 19 impeachments in U.S. history.

“The course presents an overall framework of impeachment, removal, or criminal investigation of a president and rather than focusing on President Trump, reviews all 19 impeachments in U.S. history. The one-unit, weekend class is not a requirement for graduation and is not paid for by state funds,” the university told Fox News in a statement.

Numbers of Democrats in Congress have called for Trump to be impeached but the House of Representatives has overwhelmingly rejected the proposal in December.