U.S. Immigrations and Customs Enforcement (ICE) arrested more than 150 illegal immigrants throughout the week even though Democratic Oakland Mayor Libby Schaaf sent out a warning of a possible raid Saturday.

ICE began arresting people one day after Schaaf’s warning message as part of a “targeted immigration enforcement operations,” according to Fox News. Around half of the illegal immigrants arrested have past criminal history, including assault and weapons charges as well as other violent crimes.

One of the illegal immigrants arrested in the sweep is a well known gang member who has served over 15 years of prison time and has been deported by ICE four times. Armando Nuñez-Salgado, 38, from Mexico, was arrested Sunday.

ICE deputy Director Thomas Homan blasted Schaaf for sending out the warning message to the public, saying she put the officers at greater risk by publicizing “her suspicions.” (RELATED: Oakland Mayor Sends Out Warning On Possible ICE Raid)

“The Oakland mayor’s decision to publicize her suspicions about ICE operations further increased that risk for my officers and alerted criminal aliens — making clear that this reckless decision was based on her political agenda,” Homan said in a statement Tuesday. “Unlike the politicians who attempt to undermine ICE’s critical mission, our officers will continue to fulfill their sworn duty to protect public safety.” 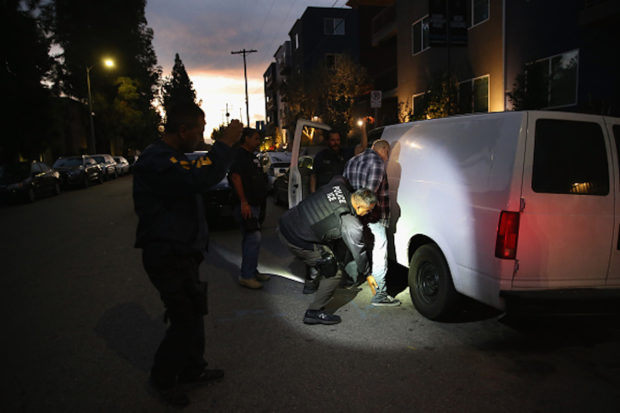 The news also comes after ICE carried out raids on more than 100 businesses in the Los Angeles area earlier this month, arresting 212 illegal immigrants over a five-day span.