Melania Trump said “change” is needed during a Thursday summit on the opioid crisis at the White House.

“Everyone in this room knows that our country is in the middle of the opioid crisis,” the first lady shared in her remarks. “And I’m so proud of the work that this administration has already done to combat this epidemic.  We all know there is still much work to be done, which is why you’re all here today.” 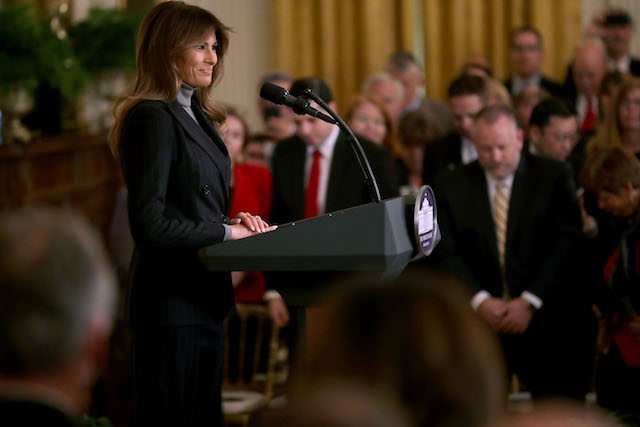 First lady Melania Trump (L) arrives in the East Room to deliver remarks during the White House Opioid Summit March 1, 2018 in Washington, DC. The summit was organized to focus attention on the national opioid addiction crisis and how to combat the epidemic. (Photo by Chip Somodevilla/Getty Images)

“Our unified goal is that of helping all who have been affected by drug addiction,” she added. “And, for me, that means focusing on babies and young mothers, which is something I have been often seeing in my travels.”

Trump then read a letter she received from a woman named Betty Henderson, who lost her son to a drug overdose. Henderson attended the summit and was brought to the stage as the first lady read her letter.

“‘Dear Mrs. Trump, On September 22, 2017, a needle took the life of my 29-year-old son, Billy.  The day after my son’s death, I had to go to the medical examiner’s office to claim his body.  No mother should ever have to claim their child’s body,'” Trump shared. “I’m sure that you as a mother would have some understanding of the depths of despair that I experienced on that day.”

“‘Mrs. Trump, I’m asking for your help in claiming these lost souls before drugs take them from this Earth,'” she added. ‘”I pray that we give peace to families in knowing that they told their loved ones how much they are treasured.'”

“Betty, thank you for having the strength to reach out in the midst of your grief.  Your story touched me, and I know it has now touched everyone in this room,” the first lady explained to the group. “Let’s all keep Betty and her son, Billy, in mind today as you are working through some of the issues related to the opioid epidemic. Sadly, she is not alone in her grief, and we need to change that.”

Since President Donald Trump took office, the first lady has visited facilities that work with and help families that are struggling with addiction.