Baltimore is the most dangerous city in America, according to a new study by USA Today, with 55.8 murders per 100,000 residents. In spite of that fact, the Maryland Democratic Party is touting the “assault weapons ban” the party implemented in 2013 as a way to raise money. “Will USA follow MD’s lead?” asks a fundraising email from Maryland Democratic Party Chairwoman Kathleen Matthews.

The fundraising email from Matthews, wife of MSNBC personality Chris Matthews, reads, “Following the tragic Sandy Hook shooting in Newtown, Democrats in Maryland passed one of the toughest assault weapons bans in the country.”

“Now, as young people in Parkland are leading the Never Again movement against gun violence, all of Maryland’s Democratic members of Congress are united against the NRA and their Republican cronies in the fight to pass an assault weapons ban to protect all Americans.”

It then contained a picture with a link to the state party’s fundraising page: 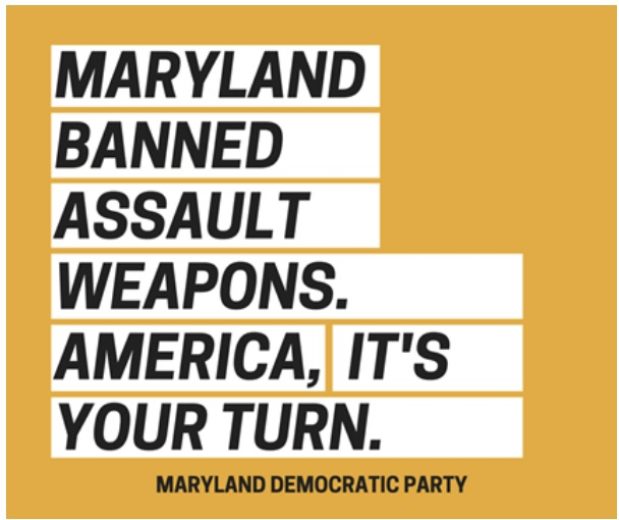 Matthews continues, “Help us ensure they can continue their work in Washington and Annapolis by making a contribution of $25, $50, or even $100 today. We have great Democratic representation here in Maryland. Let’s keep it that way.”

In 2013, then-Governor Martin O’Malley, signed the Firearms Safety Act into law, which was billed at the time as “among the nation’s most restrictive gun-control measures.” In the years following the law’s passage, the City of Baltimore — that largest city in Maryland — has seen an escalation of its murder rate, jumping from 211 murders in 2014 to 343 in 2017.

In addition to Maryland’s restrictive gun laws, the city of Baltimore has very restrictive laws regarding gun ownership and is a “may issue” state, not a “shall issue” state in regards to the ability to carry a concealed firearm.