At least seven House Democrats are known to have direct ties to Nation of Islam leader Louis Farrakhan, a notorious anti-Semite and racist who has called Jews “satanic” and said white people “deserve to die.”

With the exception of Davis, the Democratic representatives have ignored repeated requests for comment regarding their relationships with Farrakhan. (RELATED: Here’s What Louis Farrakhan Has Said About Jews, Gays And White People)

Davis has a personal relationship with Farrakhan and is unbothered by Farrakhan’s position on “the Jewish question,” he told TheDCNF on Sunday. Davis called Farrakhan an “outstanding human being” in an interview with The Daily Caller in February and said he has regularly visited with Farrakhan.

Davis’ office released a statement attributed to the congressman on Monday that attacked TheDCNF for accurately covering his comments. The statement, which did not mention Farrakhan, claimed that anti-Semitism is “antithetical to everything I believe and everything that I work for on a daily basis.” Davis’ attack on reporters covering his claims came after the Anti-Defamation League, a Jewish civil rights organization, blasted the congressman for praising Farrakhan and called on him to denounce the Nation of Islam leader. As of this article, Davis has yet to condemn Farrakhan.

Ellison, the deputy chair of the Democratic National Committee (DNC), repeatedly attended meetings with Farrakhan while in Congress, according to photos and videos reviewed by TheDCNF and Farrakhan’s own statements.

Ellison is a former Nation of Islam member and once defended Farrakhan against claims of anti-Semitism but claimed in 2006 when he ran for Congress that he had left Farrakhan in his past. The meetings Ellison has since attended with Farrakhan undercut his claims of cutting ties.

Carson and Meeks joined Ellison in attending a 2013 dinner with Farrakhan and Iranian President Hassan Rouhani. Carson and Ellison also visited Farrakhan in a hotel room in recent years, according to Farrakhan, who said in a December 2016 video that he was baffled Ellison had denounced him that month while running for DNC chair. Ellison and Carson had both visited Farrakhan during a recent trip to Washington, Farrakhan said.

When asked about the meetings by CNN’s Wolf Blitzer, Ellison dodged the question and wouldn’t deny visiting Farrakhan in his hotel room. Carson has also declined to challenge Farrakhan’s account of that meeting.

Waters attended a Nation of Islam convention in 2002, where Farrakhan railed against Jews and defended Palestinian suicide bombers, The Daily Caller revealed in February. Farrakhan praised Waters during his speech, to applause from the audience of Nation of Islam members.

Recently re-emerged footage from 2006 show Waters, Green and Lee exchanging handshakes and hugs with Farrakhan, before standing and conversing with him. 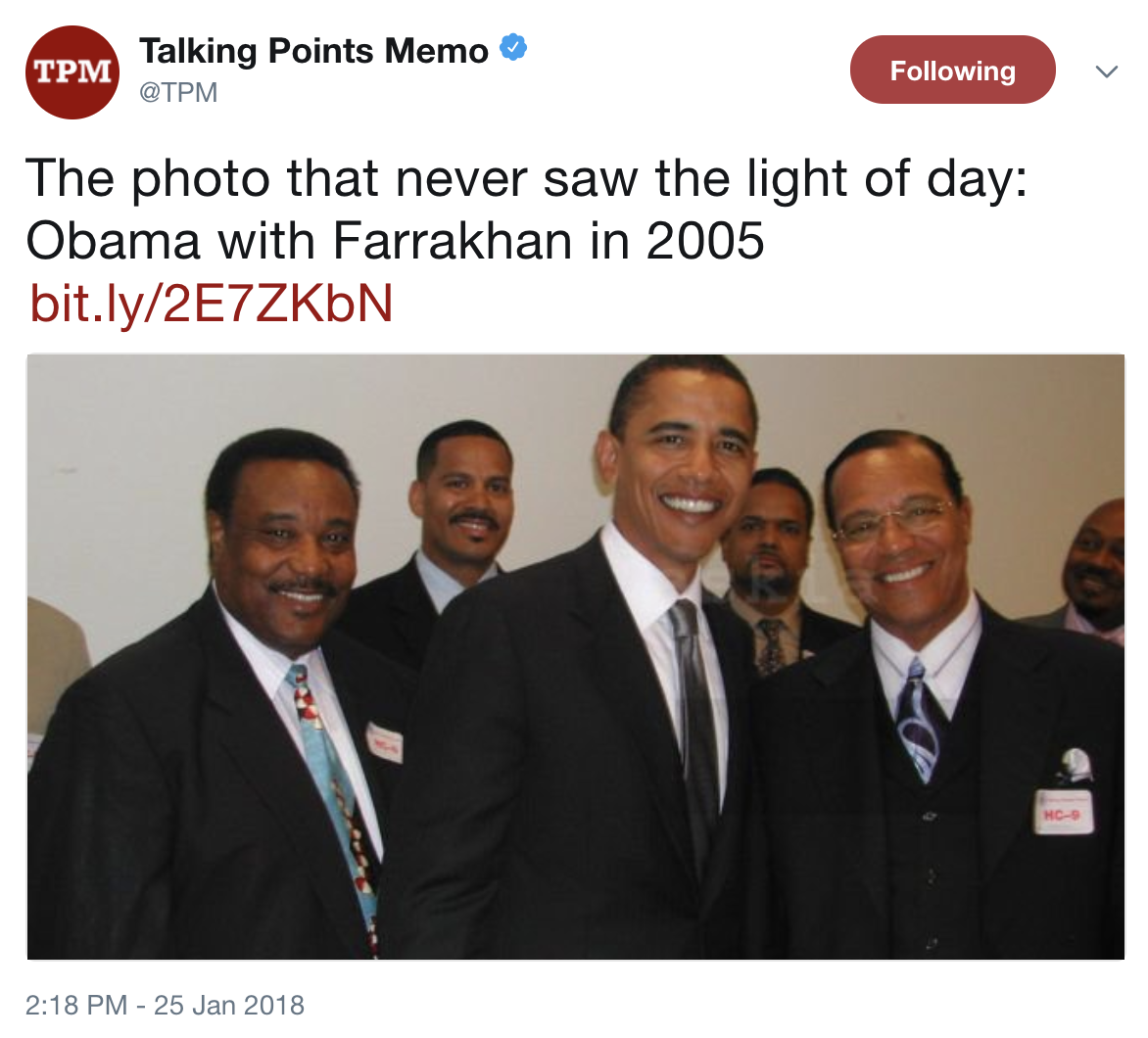 The photographer, who worked for a Nation of Islam publication, said he suppressed the photo for 13 years at the request of CBC Democrats who wanted to protect Obama’s presidential aspirations. He released the photo in January.

Twenty-one current CBC members were part of the caucus in 2005 when Farrakhan attended a CBC meeting. TheDC reached out to all 21 members’ offices to ask if they were willing to denounce Farrakhan. None would.