The U.S.’s most productive shale oil formation, nestled in western Texas, is on track to double its output in the next five years, according to a new report.

“What’s amazing about the Permian is how quickly the narrative has changed,” said Steve Everley, spokesman for Texans for Natural Gas.

“Fifteen years ago it was considered a declining field where costs would keep rising,” Everley told The Daily Caller News Foundation. “Today the Permian Basin is one of the lowest-cost fields in the world, and the region produces more oil than all but a handful of OPEC members.”

IEA projects global oil production capacity to hit 107 million barrels per day by 2023, growing at an annual pace of 6.4 million barrels a day. The lion’s share of that growth is expected to come from the U.S.

“The folks who bet against the Permian were effectively betting against technology and innovation, and they lost big,” Everley said.

U.S. oil production growth “is led by the Permian Basin, where output is expected to double by 2023,” IEA reported. The U.S. is expected to overtake Russia as the world’s largest oil producer, which is good news for the Trump administration’s “energy dominance” agenda. 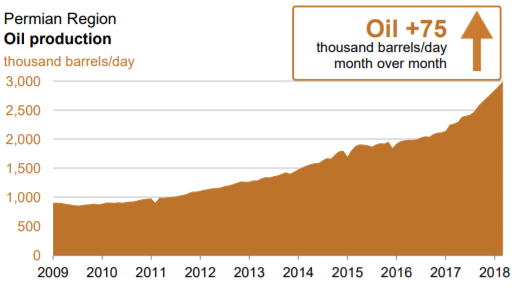 The Trump administration has rolled back energy regulations they saw as keeping the U.S. from reaching its full potential. The White House is also pushing to open more federal lands and offshore areas to oil and gas drilling.

But gains from offshore and federal lands production is expected to be dwarfed by Permian output. That’s partly because of geology and more regulatory hurdles companies have to jump through to drill on federally-controlled lands.

The Permian is so productive because there are several layers of resource-rich rocks. Oil and gas drillers call this type of shale formation “tiramisu” because of how productive it can be, consisting of several types of shale.