The third-highest ranking House Democrat shared a stage with Nation of Islam leader Louis Farrakhan, a notorious racist and anti-Semite, and has refused to condemn the hate group leader.

South Carolina Rep. James Clyburn attended a 2011 event with Farrakhan and shared the stage with him, even after Jewish groups voiced their opposition to Clyburn attending the event. Clyburn told the Final Call, a Nation of Islam publication, that he was “not bothered in the least bit” by criticisms of his attendance at the event.

As the assistant Democratic leader, Clyburn is the third-highest ranked Democrat in the House. He declined to condemn Farrakhan in a statement released to The Daily Caller News Foundation on Thursday.

“I have fought all my life to advance the cause of social justice and equality, and I have always opposed bigotry in all its forms,” Clyburn said in the statement. His office declined repeated inquiries regarding whether the congressman is willing to condemn Farrakhan, and whether he stood by his decision in 2011 to shrug off criticisms of Farrakhan.

Clyburn’s fellow House Democrats are divided on whether or not to condemn Farrakhan.

California Rep. Barbara Lee and New York Rep. Gregory Meeks both condemned Farrakhan on Thursday, but other House Democrats known to have met with Farrakhan have yet to condemn him. 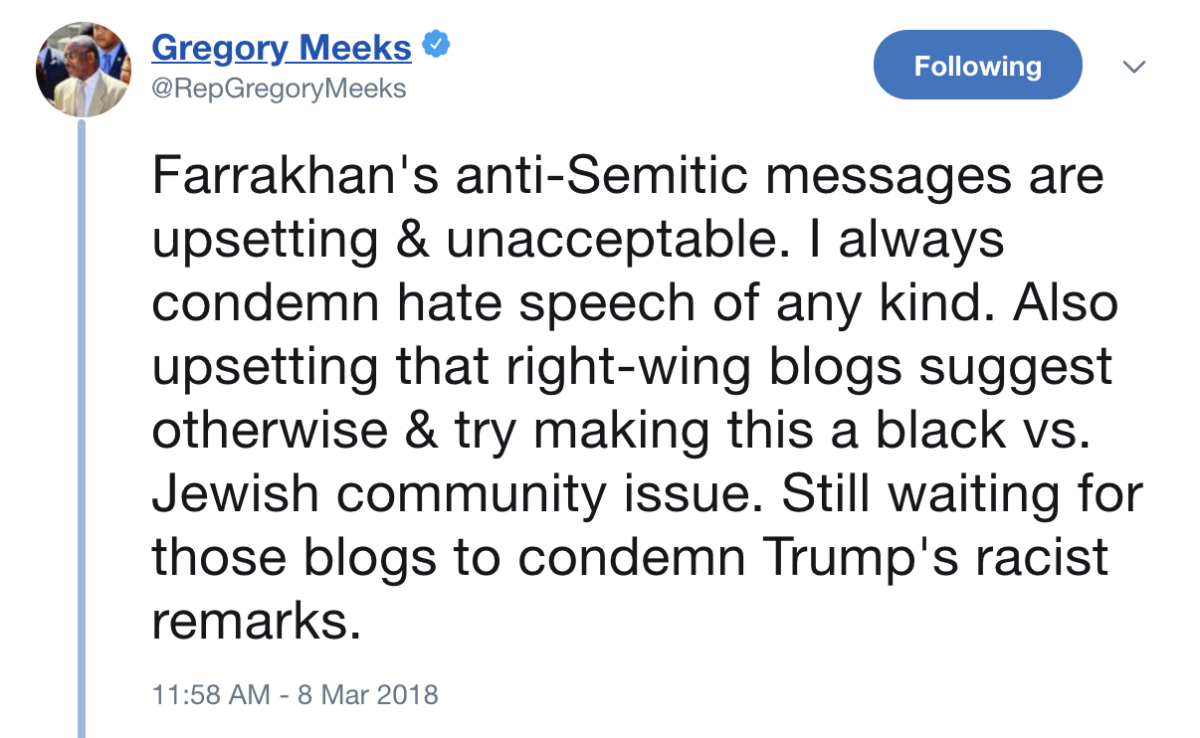 Illinois Rep. Danny Davis told TheDCNF that he isn’t bothered by Farrakhan’s position on what Davis called “the Jewish question” and confirmed that he has a personal relationship with Farrakhan. Davis called Farrakhan an “outstanding human being” in an interview in February. Following a backlash, Davis reversed course on Thursday and said he condemns Farrakhan’s “views and remarks” about Jewish people.

“Let me be clear: I reject, condemn and oppose Minister Farrakhan’s views and remarks regarding the Jewish people and the Jewish religion,” Davis said in a statement to Jewish website Forward.

“Those who have attempted to defame me either do not know me or my lifetime record or are deceitfully and deceptively attempting to use this as an opportunity to foment division and hatred between the African American and Jewish communities,” he added.

The statement did not explain why Davis previously called Farrakhan an “outstanding human being,” or why Davis wasn’t bothered by Farrakhan’s tirades against “satanic Jews” until after a public backlash.

Indiana Rep. Andre Carson confirmed to Politico that he has met with Farrakhan but declined to say whether or not he condemns the hate group leader.

“As a Member of Congress, I have met with a diverse array of community leaders, including Minister Farrakhan, to discuss critical issues that are important to my constituents and all Americans,” Carson told Politico. “While many of these leaders have long track records of creating positive change in their communities, this does not mean that I see eye to eye with them on all beliefs or public statements.”

“Racism, homophobia, islamophobia [sic], anti-Semitism, xenophobia and other forms of intolerance have no place in our civil discourse,” Carson told Politico. His statement did not include a condemnation of Farrakhan.

Minnesota Rep. Keith Ellison, also the deputy DNC chair, condemned Farrakhan while first running for Congress in 2006 and assured the public that he had left Farrakhan in his past.

However, Ellison attended multiple meetings with Farrakhan while in Congress, including a visit to his hotel room, according to photos, videos and witness accounts reviewed by The Daily Caller News Foundation. Ellison has not denied that those meetings take place, although he has insisted that he currently has no relationship with Farrakhan.

The leaders of Women’s March have also come under fire for their support for Farrakhan. The co-president of Women’s March, Tamika Mallory, attended the Nation of Islam’s annual convention last month and sat in the audience as Farrakhan railed against Jews and white people. Mallory repeatedly defended Farrakhan in the ensuing backlash.

Mallory has refused to back down from supporting Farrakhan and the Nation of Islam, and defended her relationship with both as “coalition work.” (RELATED: This Women’s March Leader Just Doubled Down On Her Anti-Semitic Friends) 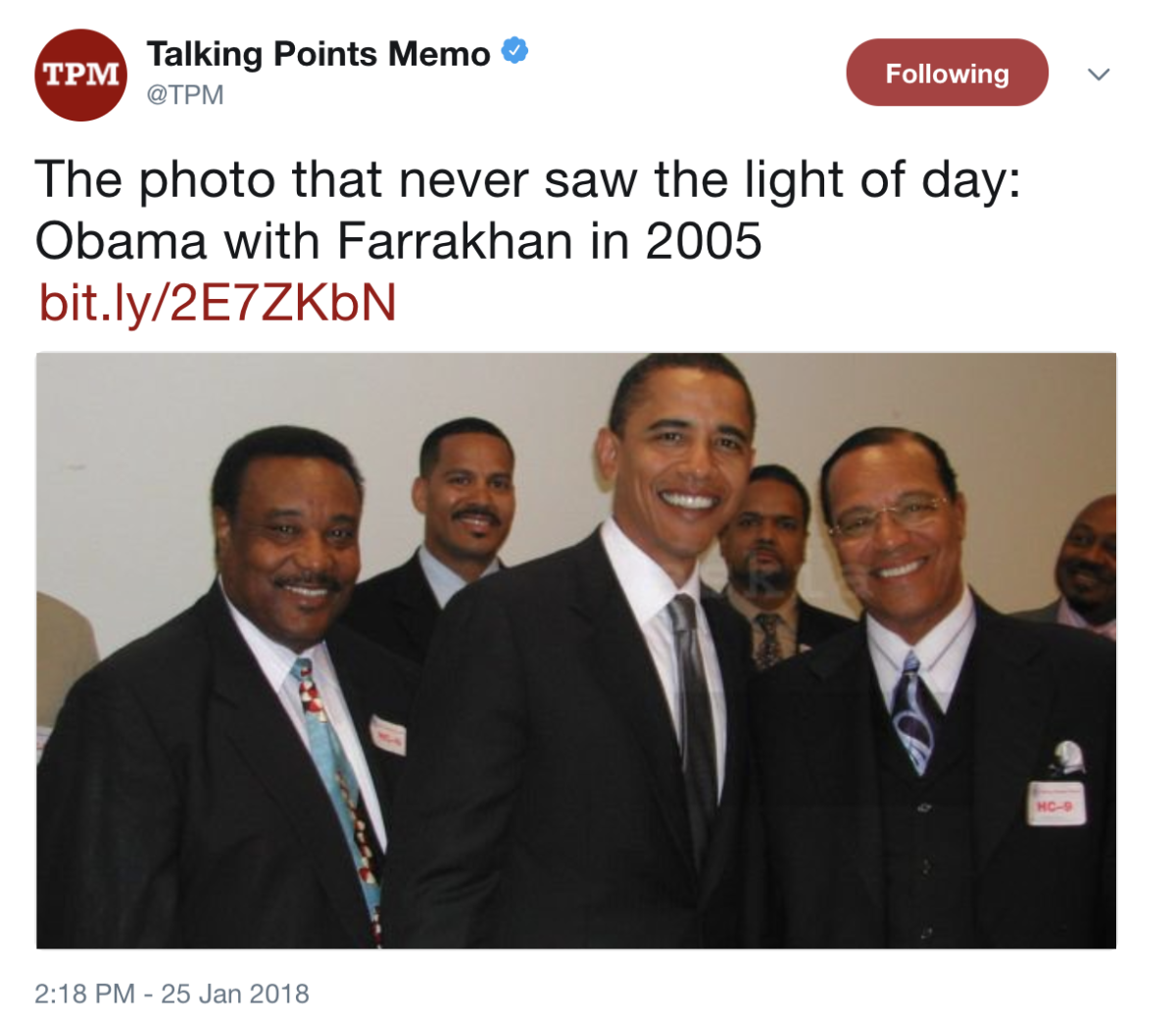 The Nation of Islam photographer who took the photo said he suppressed it for 13 years at the request of CBC members who worried the photo would hurt Obama’s presidential aspirations.