In the past couple months, the Daily Dealer has told you about air fryers, the healthier alternative to a traditional deep fryer. After all, you aren’t using oil and therefore not consuming all the fats that come with that. With an air fryer, you can still fry all your favorites – French fries, onion rings, steak, chicken and more – without the added guilt and extra calories. This particular air fryer, by Simple Chef, is quite lauded. Eighty percent of the 775 customers who reviewed it gave it a perfect 5 out of 5 stars. And right now, it is 60 percent off: 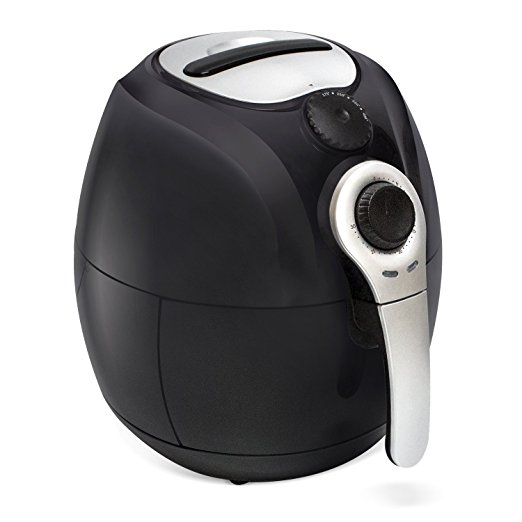 Reviewer Matt Butler was one of hundreds to give this kitchen appliance 5 stars in a review titled “Glad I took the chance and finally got one of these!” I’ve reprinted his entire comments below, but this is the takeaway line: “If you’re like me and want to eat healthy but keep making excuses to eat fried food (it’s the weekend; the game is on; today ended in “y”), go get one of these things yesterday!”

Finally got in my Air Fryer and put it to the test. Made two types of wings, naked with RedHot seasoning (yep, it’s a thing now!) and double-breaded using egg, not water. By the way, I’m sure you can cook more wings at once but you have to cook slightly longer and shake them up in the basket more.

For those that don’t want to read my long-winded thoughts, here’s the bottom line:
If you’re like me and want to eat healthy but keep making excuses to eat fried food (it’s the weekend; the game is on; today ended in “y”), go get one of these things yesterday!

Ok, now that that’s out of the way, I’ll answer the next biggest question: Did the chicken taste just like deep fried? Um not completely, but how can you do that without dumping it in oil? BUT…they still came out pretty freaking close seeing that the only oil I used was olive oil spray. I’ll say that again…I only used OLIVE OIL SPRAY and they were delicious! Seriously…the naked wings were crazy close to tasting fried and the breaded ones tasted very good too (next time I probably won’t use egg to double-bread though because I think it made the crust a little chewier). All of the wings came out crispy on the outside and done all the way through. It held the seasonings well and the chicken kept a lot of its natural juices so they weren’t all dry as heck. I’ll have to try it with chicken breasts to really test that out though. It takes up some counter space but if you saw the big, doofy deep fryer I replaced with it, I actually gained some room. It does take this a lot longer to cook than deep frying though and there’s a little bit of a learning curve. I like to cook so I didn’t mind either of those things. I also consulted with one of the smartest people I know, YouTube, so that helped too.

As far as the cooking itself, I just seasoned them up as if I were frying them except I sprayed with oil (straight on the naked wings before adding seasonings. I sprayed the breaded ones after letting them sit with the flour for a while). I had to cook the wings about 30 min. total, flipping or shaking every 10 min or so. While cooking, the outside of the fryer did not get stupid hot but I wouldn’t go sticking my tongue on it or anything. The basket slid in and out easily while cooking but I’ve heard that the infamous Air Fryer slide issue sometimes doesn’t show up until later so I’ll update if this changes.

The fryer has a feature that “pauses” the heat when you pull the drawer out. Also, when the timer runs out there is an audible ding that is loud but not too loud. When this happens, the fryer turns itself off until you put more time on. I personally love this feature since it just ding’ed while I was in the middle of writing this and I didn’t have to run downstairs for fear of my food burning up.

For cleanup, there are really only two parts to wash and they are both dishwasher safe. My biggest issues were the price and capacity (note: Neither of these issues are specific to this fryer but more like a general issue. Relative to other air fryers, this thing is pretty inexpensive for the size). It will be hard to cook wings and fries for a group of 4 or more since most stuff takes about 1/2 hour and you can’t really cook two things at once in the 3.5L basket.

Other than that, I don’t regret my purchase at all and if other things come out as good as these wings did, I’ll probably, hopefully be tossing the deep fryer. I’m giving this thing a 9/10 but only because nothing is perfect and I don’t have another AirFryer to compare it to. It definitely does what it says it will do though.

P.S. Editing what I said about the potato chips being soggy in the middle of some. I turned the heat up and mixed a little more frequently and the chips came out great too.

Imagine eating fried foods and not feeling bad about it. In the world we currently live in, that’s actually possible.