Left-wing pundits and activists are increasing pressure on Democratic politicians to embrace the fringe position of abolishing ICE.

Once an idea limited to the far-left fringes, abolishing the nation’s immigration enforcement agency now looks likely to become a campaign issue in the Democrats’ 2020 presidential primary.

Former Hillary Clinton campaign spokesman Brian Fallon came out for abolishing the agency in January. “ICE operates as an unaccountable deportation force,” Fallon argued. “Dems running in 2020 should campaign on ending the agency in its current form.” 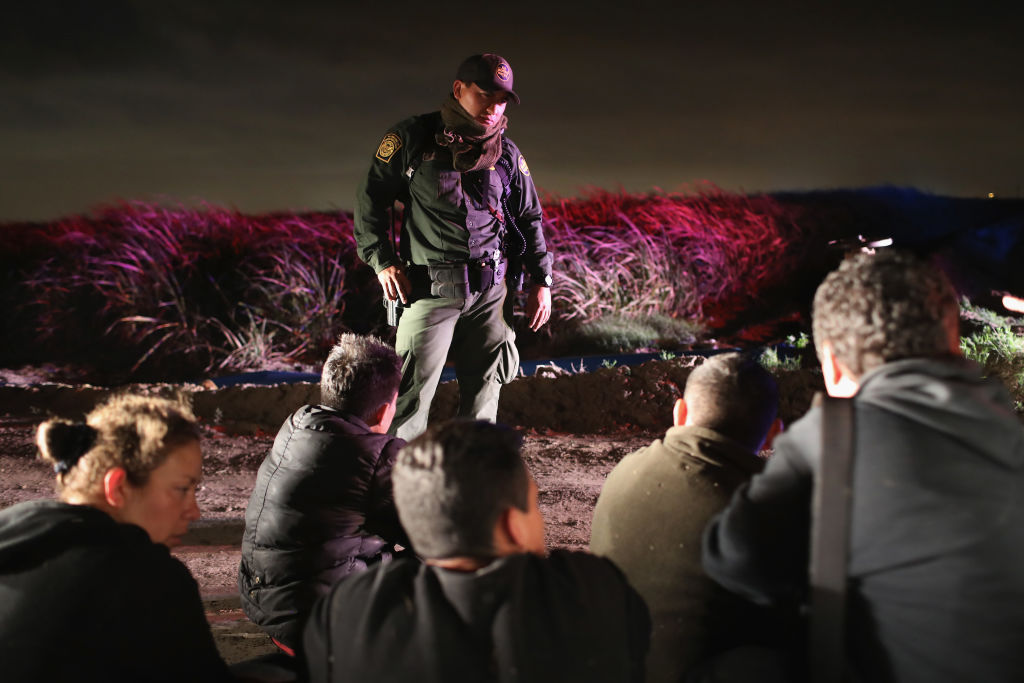 A U.S. Border Patrol agent watches over a group of undocumented immigrants on February 23, 2018 in McAllen, Texas. The agents captured the group of Central American immigrants shortly after they rafted across the border from Mexico into Texas. (Photo by John Moore/Getty Images)

Liberal writer Jack Mirkinson on Friday slammed Harris for her answer in an article titled, “Not Good Enough, Kamala Harris.”

“Any serious defender of undocumented people in this country would look at ICE and know that it is a cancer that needs to be excised from the U.S. Pretending that the most diseased levers of state power can be molded into something better is a useless fantasy. ICE must be abolished. Anything less is not good enough,” Mirkinson wrote on Splinter, a left-wing website.

“Kamala Harris is very likely running for president in 2020. It should be a political problem for her that she is not willing to take her criticisms of ICE to their logical conclusion and call for its abolition. She should be asked, over and over again, why exactly she is willing to uphold the legitimacy of such a racist, corrupt, and thuggish organization,” Markinson concluded.

“Anyone else who decides to run—Bernie Sanders, Kirsten Gillibrand, Elizabeth Warren, Eric Garcetti, you name it—should be asked the same question.”

“The idea of defunding ICE has gained traction among immigrant-rights groups horrified by the speed at which, under President Donald Trump, the agency has ramped up an already brutal deportation process,” The Nation’s Sean McElwee claimed.

“ICE​ is terrorizing American communities right now,” Angel Padilla, policy director of the Indivisible Project, told The Nation. “They’re going into schools, entering hospitals, conducting massive raids, and separating children from parents every day. We are funding those activities, and we need to use all the leverage we have to stop it.”

“This is a growing position on the left, and I imagine 2020 Democratic presidential aspirants will have to grapple with it,” Hayes, the MSNBC host, wrote on Twitter. He linked to McElwee’s article.

Acting ICE Director Tom Homan said Thursday that Democrats are being misleading about the illegal immigrants that his agency is deporting.

“Nine out of every 10 aliens we arrested [in the last fiscal year] did have a criminal history,” Homan told Fox News. “They don’t want to know the facts. They want to keep playing this political game and put smoke and mirrors up about what ICE is actually doing.”