When I say people love this bread knife, I don’t mean like a couple of people. I’m not talking about maybe the guy who made the knife’s mom and sister. I’m talking about PEOPLE. And lots of them.

ARE YOU KIDDING ME?

Five out of five stars after over 1,500 reviews? Okay, a closer look reveals that the aggregate score is actually a mere 4.8 out of 5. Only 86 percent of the 1500-plus people who reviewed this gave it a perfect 5. The majority of the rest gave it 4-stars (they must all be East German judges or something). Below the picture, I’ll share a review of this knife, which is 45 percent off at the moment. To give you a sense of what we’re working with here, I’ll tell you that one reviewer calls the Mercer knife he bought the “Glock of knives.” 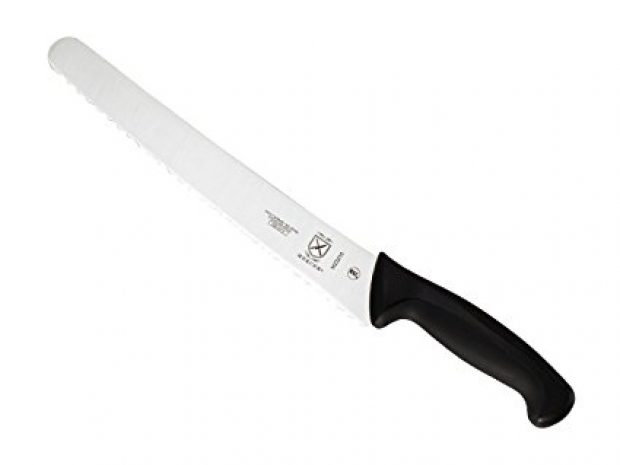 Normally $23, this bread knife is 45 percent off (Photo via Amazon)

The top review is by rorkington, who is a professional cook:

i am a professional cook and i cut bread hundreds of times a day, 8-12 hours a day, 5-7 days a week. i cut crusty breads, soft breads, i cut very thin crostini, i cut chunks of focaccia, i cut them hot or cold, often very fast. this knife has a decent heft but isnt so heavy that i get fatigue even after hour 9 working at a fast pace. the blade is thick enough not to be too flexible, and with care i have learned to avoid the unintentionally slanted cuts that a knife with a thicker spine can sometimes produce. for the amount of bread i cut, i prefer this heavier duty style, as i know i wont bend or dent it, & i sometimes also use it for rough work like trimming the tough skin off a huge ‘leg’ of prosciutto, or as a kind of tough wedge for roughly cutting apart a huge wheel of cheese or whole melon, which i do by pushing it through more than sawing. the knife came quite sharp and can bite into all crusts well, often requiring less than one stroke to cleanly produce delicate, non-torn up slices of baguettes or pugliese. the handle is comfortably soft and ergonomically shaped, and cleans and sanitizes easily. the size feels perfect as i can manage large loafs or the occasional huge cheese wheel or watermelon well but its not too long or heavy to feel cumbersome with small baguettes, etc. i would recommend Never putting a good knife through a dishwasher, but washing this at the end of a sometimes ten hour shift with warm soapy water and towel-drying it is easy and effective. i looked at and experimented by working with many bread knives before purchasing this one and i recommend it to anyone who wants a high quality bread knife that can sometimes sub in for a few extra purposes that its not important or prudent to use your good chefs knife for. also, its worth noting that its the Cooks Illustrated top pick, and also several cooks i work with received this knife among the new student kits that CIA and other culinary schools equip their students with, and they still have and use them because they stay sharp and hold up well. also i feel like i should mention i took off like 1/4 of my thumb including cutting directly through my nailbed when i was first using it, and i wasnt even using that much pressure. hurt like hell but cutting through tough stuff easily is what knives are for. great kitchen staple.

Even the top negative review is not all that cutting. The reviewer, “Made in ‘Merica,” was in the stark minority by granting it only 3 stars. His/her complaint? “I like it… Holds an edge pretty decent. I think i would like it more if i would have purchased the shorter blade.” Puh-lease. If your only complaint is that the knife is too long, you know you have a good one on your hands.