An Indiana University Pennsylvania professor barred one of her students from a class on Christianity for refusing to apologize for challenging transgender and feminist arguments.

Lake Ingle, an Indiana University senior, told The Daily Caller News Foundation that he appeared before the university’s Academic Integrity Board (AIB) on March 9 to dispute Dr. Alison Downie’s attempt to have him permanently removed from a class called “Special Topics In Christianity: Self, Sin, And Salvation.”

Downie sanctioned Ingle and tried to have him barred from the class for challenging the premise of a Feb. 28 class discussion based on a Ted Talk by Paula Stone Williams, who is a transgender woman. Ingle told TheDCNF that he objected to the discussion because Downie allegedly prompted the class to talk about “the reality of white male privilege,” systemic male sexism, and concepts like “mansplaining” based on Williams’ talk.

“I protested to the use of anecdotal evidence to then start a discussion and trying to reference the material or the speaker’s account as if they were facts. The professor made it very clear that these things (White male privilege, mansplaining, etc.) were … well, she seemed to me that she made it clear that they were a reality and not part of an ongoing discussion,” Ingle told TheDCNF.

Downie also wrote in the course’s “Classroom Policies and Expectations” that students are expected to be active participants in each session.

“Learning is an active, sometimes downright uncomfortable and difficult process which requires sustained, committed involvement in a supportive (and, I hope fun) respectful atmosphere….In my view, if a course (or research) is not challenging, even disruptive in some ways, it is not likely to be particularly rewarding,” Downie wrote.

Downie clarified further down in the document that students can cultivate a respectful atmosphere by seriously engaging with the course material through analysis and critique based on a thorough understanding of the selected author’s or speaker’s position.

Ingle also alleged that Downie opened up the class discussion only to the female students. Male students were, according to Ingle, instructed to remain silent until the female students had their chance to speak. Ingle told TheDCNF that he waited for up to a minute, during which time no student spoke, before speaking out and giving what he described as a “passionate” rebuttal of the premise of Downie’s proposed discussion.

Ingle told Campus Reform that Downie tried to silence him “because I am not a woman.” Ingle refused to be deterred, however, and according to the Facebook post “took this opportunity to point out the official view of biologists who claim there are only two biological genders” and disputed the gender wage gap. Ingle has since deleted the Facebook post in accordance with advice from his legal counsel.

Ingle told TheDCNF that the class continued without disruption after he spoke out, but Downie met with him the following day to give him an Academic Integrity Referral Form and Documented Agreement. The documents described Ingle’s alleged violation and the disciplinary terms to which Downie asked Ingle to agree. 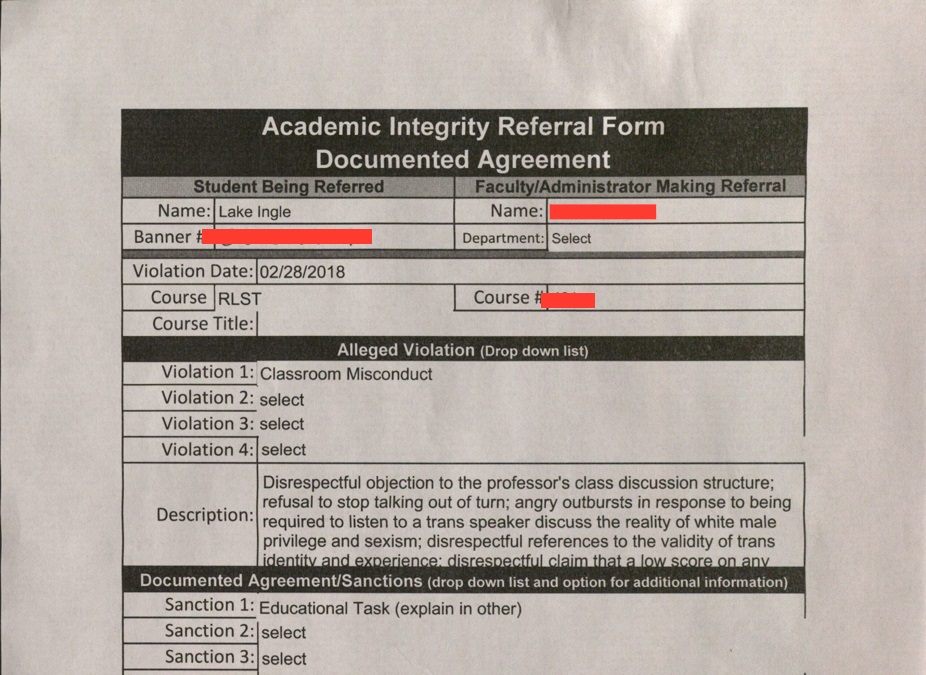 Downie asked that Ingle agree to write an apology to her for “behavior which has significantly damaged the learning environment of this course,” begin class on March 8 by reading an apology to the class, and then listen silently as Downie opened up the floor for herself and Lake’s classmates to share “how he or she felt during Lake’s disrespectful and disruptive outbursts.” 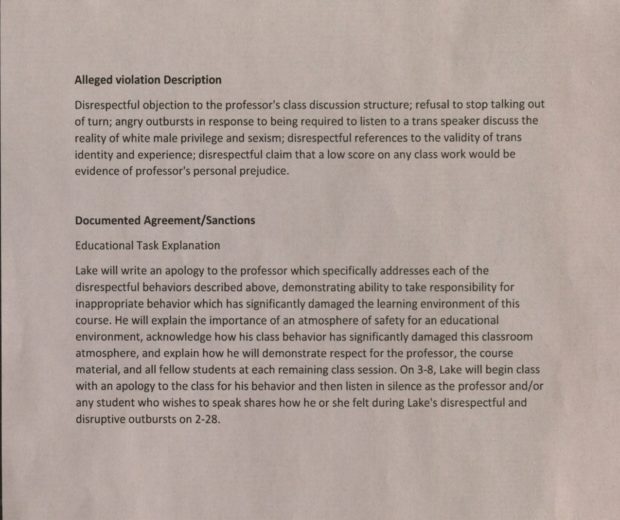 Ingle refused to sign the documents, alleging that Downie’s account of the incident included false statements and claims that he never made.

“I did not object to the views of the speaker (Paula Stone). Rather, I objected to its misuse as hard evidence to support the ‘reality’ of phenomena that are not only a matter of opinion, but also empirically unsupported (wage gap statistics). It is my belief that the instructor’s decision to file these sanctions is an attempt to bully me into redacting my views, making it a matter of free speech,” Ingle wrote in his Facebook post, which he provided to TheDCNF.

Upon his refusal to admit fault and agree to the disciplinary terms, Ingle received a letter from Provost Dr. Timothy Moerland, explaining that he was barred from the class upon Downie’s request. The letter explained further that Ingle could not return to class until the academic integrity charges against him had been adjudicated and that he was not allowed to have any form of contact with Downie or the class members. 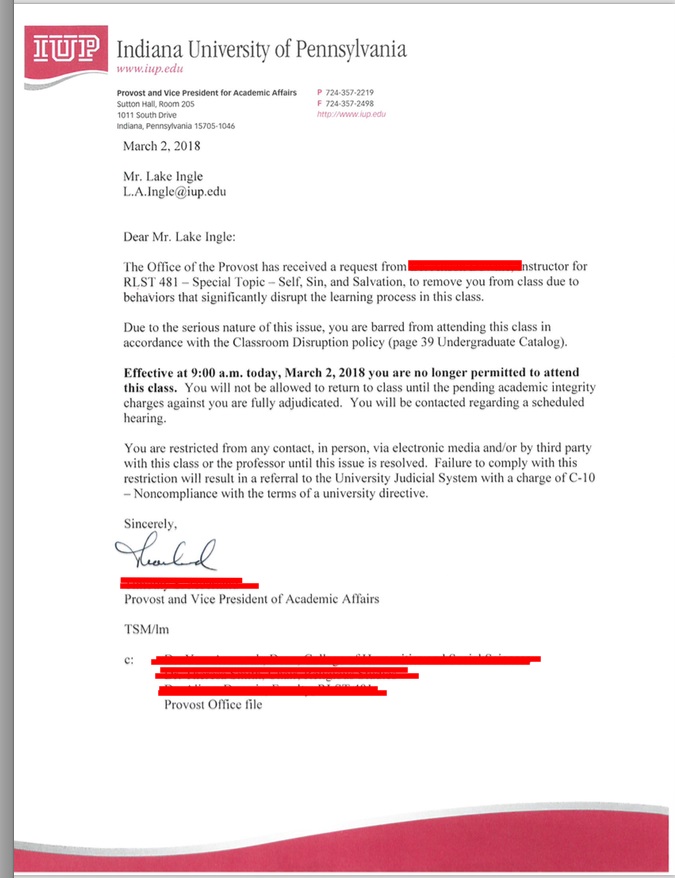 Ingle told TheDCNF that Downie claimed at the March 9 hearing before the AIB that she had taken issue with Lake’s contributions to class discussions, which Downie allegedly described as “domineering and aggressive,” since week two of the course. The course is now in week seven, and Lake and his counsel argued that Downie never made any issue known to Lake concerning his class contributions until Feb. 29. A student witness also testified on Ingle’s behalf at the hearing, according to Ingle. The unnamed student allegedly testified that while Ingle’s comments during the Feb. 28 class were “passionate and enthusiastic,” they were not disrespectful.

Ingle also told TheDCNF that, if the AIB does not rule in his favor, he will not be able to graduate on time and will be forced to repay any federal grant money that he has received.

The AIB will issue a ruling in Ingle’s case by March 19.

Downie did not respond to TheDCNF’s request for comment by the time of publication.