The Trudeau government almost greeted Beligum’s royal family with a German flag upon their arrival in Ottawa on Monday, the Canadian Press reports.

If not for an astute Belgian journalist on-scene, who pointed out the difference between the flags, the mistake would have gone unnoticed. Canadian Prime Minister Justin Trudeau was out of town on a steel factory tour but sent Governor General Julie Payette to represent Canada.

Belgian King Philippe and Queen Mathilde came to Canada to commemorate the 100th anniversary of the liberation of Belgium from German troops during the First World War. Canadians fought in the trenches there for almost four years and were part of the British contingent that faced the first use of poison gas on the Western Front at the First Battle of Ypres in 1915.

The governor general’s spokeswoman, Marie-Eve Letourneau, explained the situation in an email. “While we were preparing for the tree-planting ceremony on the grounds of Rideau Hall, it was brought to our attention that there was a mix up with a small flag that was used to help identify the tree planted by Her Majesty Queen Fabiola in 1977,” she wrote.

That was the last state visit by Belgium to Canada.

“So the King and Queen of the Belgians come to Canada. Canada’s prime minister is nowhere to be found. And they are greeted by the German flag which looks like this.” 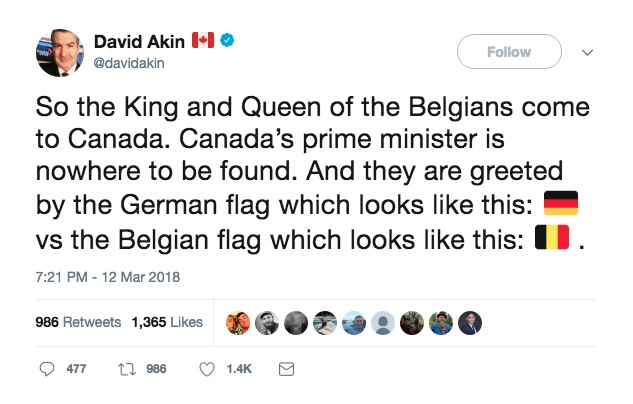