“He’s an intern, an analyst. I mean I guess we could have several names for it. He can’t coach on the field but he can work with us off the field. And today was actually the first time that he was cleared by the NCAA. … That finally got completed today, so now he’s officially going to be a part of the staff here,” Saban told the media during the team’s first spring practice about bringing Jones onto his staff, according to 247 Sports.

This has to be arguably the most emasculating way to be referred to after leading an SEC team. An intern? 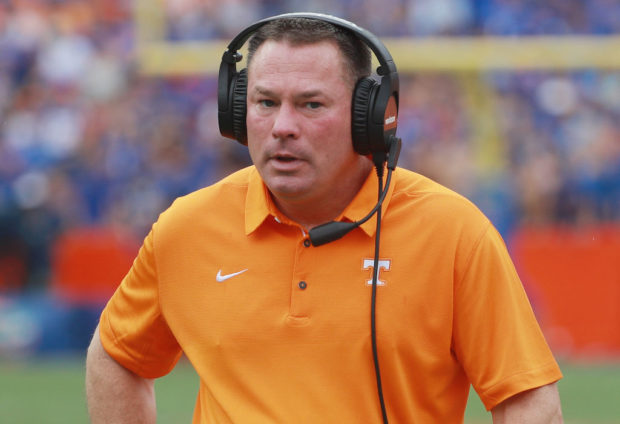 GAINESVILLE, FL – SEPTEMBER 16: Head Coach Butch Jones of the Tennessee Volunteers is seen on the sidelines during the second half of their game against the Florida Gators at Ben Hill Griffin Stadium on September 16, 2017 in Gainesville, Florida. (Photo by Scott Halleran/Getty Images)

Jones has made millions coaching football, and is owed several million more from Tennessee. What is he thinking by taking an internship at a different SEC school? Makes no sense at all. He’s essentially crawling on his knees like a little puppy for Saban.

Here’s a fun fact for everybody. You’re a loser if you go from making million to being Nick Saban’s intern. That might sound harsh, but it’s totally true. No man should ever go from being at the top of the world to be an intern when he’s decades older than 20.

How does Butch Jones look himself in the mirror and think his life is headed in the right direction? This is embarrassing for everybody involved.