Nine months before critical midterms where Democrats are defending a record number of Senate seats, the national party is falling deeper into debt.

The Democratic National Committee (DNC) took out a $1.7 million loan in February, pushing their total debt to more than $6 million, according to recent Federal Election Commission filings.

Meanwhile, the party’s fundraising efforts yielded around half the total amount as the Republican National Committee (RNC). The DNC brought in $6.9 million in February, while the RNC raised $12.8 million.

The national Democratic arm has just over $10 million cash on hand, The Republican’s will likely need the vast amounts of cash heading into the midterms, which are historically unfavorable to a new president’s party.

“Their first midterm, they usually lose seats,” RNC chairwoman Ronna McDaniel told Politico in an article Wednesday. “We understand that, and so we’ve been preparing for that all year.”

After a disastrous 2016, where the DNC had to borrow money from former presidential nominee Hillary Clinton’s campaign, the party began to bounce back with fundraising efforts in 2018.

Chairman Tom Perez even proclaimed that “raised more money in January, for instance, of 2018 than any January in our history.” That claim, based on $6 million raised by the DNC and $1 million by a separate fundraising group, was an exaggeration and omitted key facts, according to the Washington Post’s Fact Checker. The party raised more than $7 million in January 2010, 2011, and 2012.

“If the question is, ‘Do we have enough money to implement our game plan?’ Absolutely,” Perez said.

The Republicans regularly make double what the Democrats raise in donations from donations under $200, according to data compiled by the RNC. 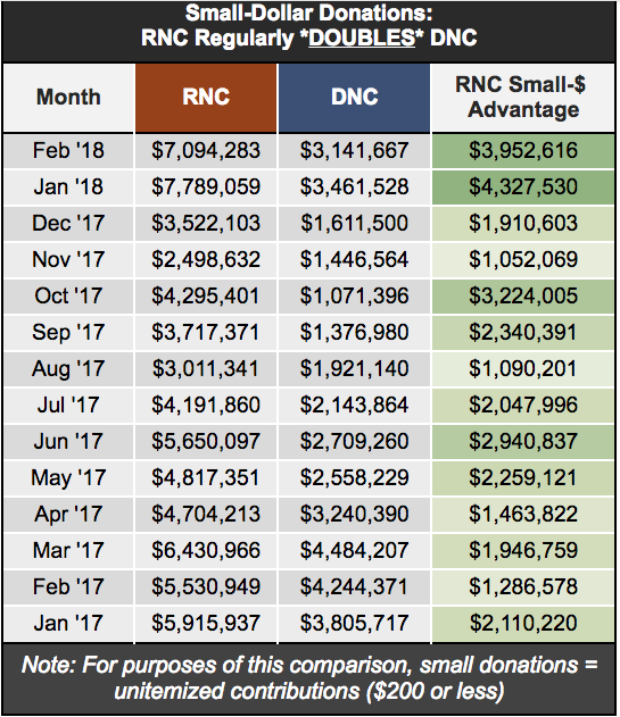 The DNC did not immediately return The Daily Caller News Foundation’s request for comment.