James Clapper, the director of national intelligence under former President Barack Obama, gave “inconsistent testimony” about contacts he had with the media while in office, according to a document released Thursday by Republicans on the House Permanent Select Committee on Intelligence.

“Former Director of National Intelligence James Clapper, now a CNN national security analyst, provided inconsistent testimony to the Committee about his contacts with the media, including CNN,” reads one entry in a seven-page summary of findings from the committee’s Russia investigation.

The committee voted on Thursday to formally end the Russia probe. A 150-page report authored by Republicans will now undergo an intelligence community review before being released to the public. (RELATED: House Intel Votes To End Russia Probe, Release Final Report)

Committee Republicans released a one-page preview of its report last week in which they pointed to “problematic contacts between senior Intelligence Community officials and the media.”

Clapper, a retired Air Force general, is one of the senior officials. 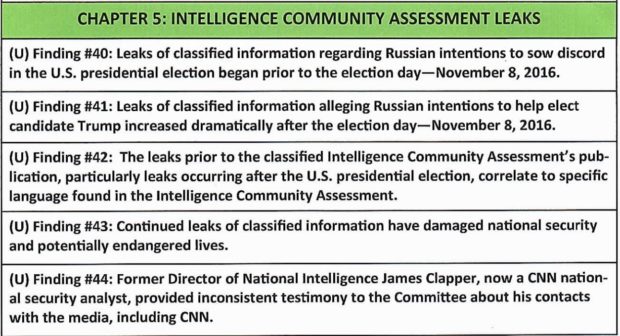 Summary of findings from the House Permanent Select Committee on Intelligence

It is not clear what information Clapper discussed with media outlets, but he was involved in a highly significant meeting with President Donald Trump just two weeks before the Republican’s inauguration.

During that briefing, Comey told Trump about the existence of the Steele dossier, the infamous report that alleged the Kremlin had blackmail material on Trump and that the Trump campaign had colluded with the Russian government.

The briefing took place and Trump was told about the dossier, CNN reported on Jan. 10, 2017. Hours later, BuzzFeed News published the dossier in full. Trump reportedly believes that the Comey briefing was a setup aimed at providing justification to release the dossier.

Clapper directly denied last week that he had contact with the media prior to leaving office on Jan. 20, 2017.

CNN’s Don Lemon asked Clapper if he wanted to respond to the reports he leaked that then President-elect Trump had received a Jan. 6, 2017, briefing about the dossier. Clapper denied having any contacts with the press during that period.

“I didn’t have any contact with media until after I left the government on the 20th of January, so I don’t quite understand, at least what I’ve read, that somehow I leaked about the dossier,” said Clapper.

“So let me get — so you didn’t leak anything about the dossier to any media?” Lemon asked.

“No, not — I mean, I talked about it after I left the government, but not during that period, and certainly not between the 6th of January and the 10th when the president-elect himself talked about it,” responded Clapper, adding, “So I don’t understand this, you know, I leaked it to CNN.”