Proactiv announced on Friday that the company would be pulling ads from MSNBC over a “situation” that arose surrounding former contributor Kurt Eichenwald and Parkland shooting survivor Kyle Kashuv.

1/2: We are aware of this incident and have pulled our ads from the network as a result.

2/2: We are working diligently with our media partner to get them removed as quickly as possible. Thank you.

Kashuv initially called for the boycott after Eichenwald attacked him on Twitter in a now-deleted tweet, noting that the latter still had his affiliation with MSNBC listed as part of his Twitter bio (he has since updated that to reflect his current situation). (RELATED: Parkland Student Calls For Boycott Of MSNBC Advertisers After Former Contributor Attacks Him) 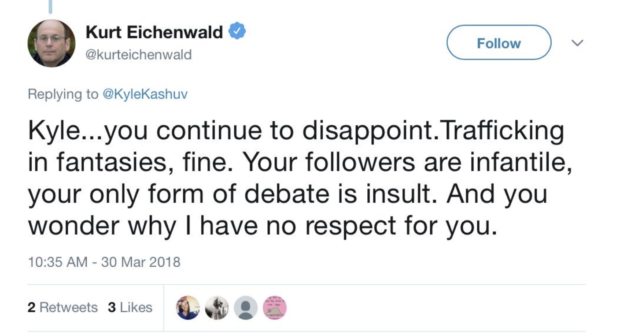 Kashuv was attempting to show the disparity between the way Eichenwald was treated for attacking him and the way Fox News host Laura Ingraham was treated after she tweeted about the number of colleges that had turned down fellow Parkland student David Hogg.

The tale of two movements:

So far, Proactiv is alone in pulling ads. And according to the Daily Wire, NBC Universal confirmed via email that Eichenwald and the network have parted ways, saying, “Kurt Eichenwald is not associated with MSNBC and has not been an MSNBC contributor since February 2018.”