The Atlantic fired conservative columnist Kevin Williamson on Thursday after leftist journalists complained about his “controversial” views, even though the outlet has a history of publishing some absurd takes and authors.

We’ve compiled some of the best takes from Atlantic writers for you here.

1. The Eclipse Is Racist?

In August, The Atlantic suggested that the solar eclipse is racist because it doesn’t affect enough black people.

“An eclipse chaser is always tempted to believe that the skies are relaying a message. At a moment of deep disagreement about the nation’s best path forward, here comes a giant round shadow, drawing a line either to cut the country in two or to unite it as one,” Alice Ristroph wrote. “The Great American Eclipse illuminates, or darkens, a land still segregated, a land still in search of equality, a land of people still trying to dominate each other.”

Ta-Nehisi Coates, a writer for The Atlantic, wrote in his book “Between the World and Me” that he did not believe 9/11 first responders were human.

“They were not human to me,” he said. “Black, white, or whatever, they were menaces of nature; they were the fire, the comet, the storm, which could — with no justification — shatter my body.”

Last January, an article in The Atlantic falsely claimed that fetuses have “not heart to speak of” at six weeks. Referring to ultrasounds that show fetal movement, the piece said, ““It is dubious to call this movement a ‘heartbeat’; there is no heart to speak of.”

The Atlantic had to correct the article to be consistent with science, which shows that fetuses have heartbeats as early as 3 to 4 weeks into pregnancy.

“This article originally stated that there is ‘no heart to speak of’ in a six-week-old fetus,” the correction said. “By that point in a pregnancy, a heart has already begun to form. We regret the error.”

4. Trump Is Probably Sleeping With His Daughter

The Atlantic hired writer Julia Ioffe even after she offered this gem about Trump and his daughter Ivanka.

“Either Trump is fucking his daughter of he’s shirking nepotism laws. Which is worse?” she tweeted in December 2016. 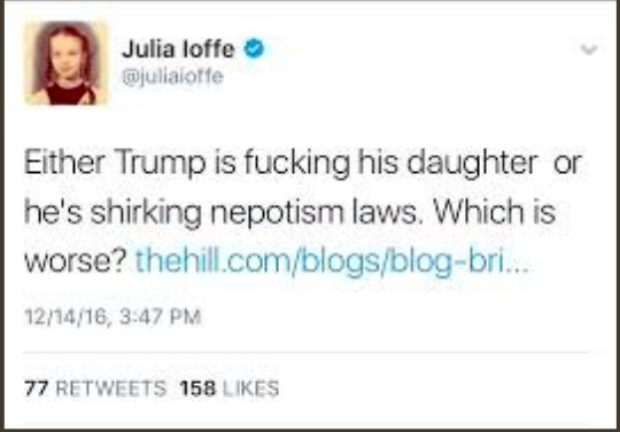 5. Trump Will Turn The U.S. Into Honduras

Atlantic editor David Frum has gone all-in on the “Trump is a dictator” bandwagon, and nothing could top his lengthy diatribe last March about how Trump is turning the U.S. government into an authoritarian regime.

“If this were happening in Honduras, we’d know what to call it. It’s happening here instead, and so we are baffled,” Frum wrote.

“We are living through the most dangerous challenge to the free government of the United States that anyone alive has encountered,” he stated. “What happens next is up to you and me. Don’t be afraid. This moment of danger can also be your finest hour as a citizen and an American.”

6. Violence In Baltimore Is Justified

Ta-Nehisi Coates is responsible for a fair share of The Atlantic’s worst articles.

After the Freddy Gray case in Baltimore, Coates seemed to argue that violence and riots were an acceptable response to Gray’s death.

“When nonviolence is preached by the representatives of the state, while the state doles out heaps of violence to its citizens, it reveals itself to be a con,” he wrote. “And none of this can mean that rioting or violence is ‘correct’ or ‘wise,’ any more than a forest fire can be ‘correct’ or ‘wise.’ Wisdom isn’t the point tonight. Disrespect is.”

Stephen Metcalf insisted in The Atlantic that John Wayne, the famous cowboy actor, was a “hollow icon of masculinity” in a November piece.

“The actor’s persona was inextricable from the toxic culture of Cold War machismo,” Metcalf claimed, arguing that Wayne was representative of a “cartoon” and “ultra-patriotic” version of masculinity.