Aric Nesbitt, a former member of the Michigan House of Representatives and state lottery commissioner, wanted to amplify his announcement for State Senate on Facebook, so he submitted it the way any candidate or company would. But the ad was quickly rejected “because it doesn’t follow our Advertising Policies. We don’t allow ads that contain shocking, disrespectful or sensational content, including ads that depict violence or threats of violence,” according to a message from the company.

What was the message? It read, in its entirety, “I’m proud to announce my candidacy for State Senate. Lansing needs conservative, West Michigan values, and as our next State Senator, I will work to strengthen our economy, limit government, lower our auto insurance rates, balance the budget, stop sanctuary cities, pay down government debt and be a Pro-Life, Pro-Second Amendment leader for the people. Find out more at www.VoteNesbitt.com.”

The post was immediately met with a rejection message. 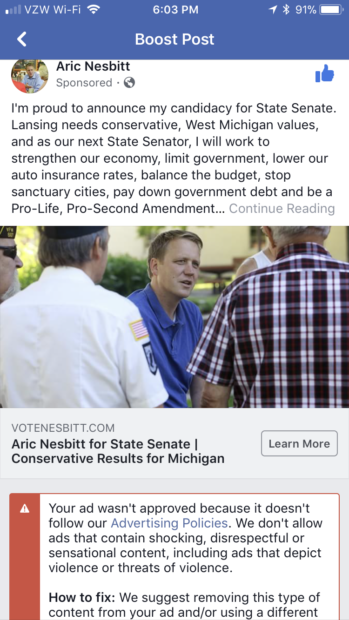 Nesbitt was not told what part of his message was “shocking, disrespectful or sensational” or may have depicted “violence or threats of violence.”

“Facebook apparently doesn’t appreciate our conservative, Midwestern values,” Nesbitt told the Daily Caller. “Modern campaigns require advertising on Facebook to get your message out, apparently Facebook wants to make it tougher for conservatives to get elected.”

The candidate did not appeal, saying, “I was very upset when I read their rejection message, if they don’t want my money I’ll find other ways to get my message out.”

The post was allowed to run on Nesbitt’s Facebook page, he just wasn’t allowed to run it as an ad. “I think they should make their policy public on what method they use to reject political advertising,” Aric told the DC.

Zuckerberg and Facebook have been vocal supporters of immigration reform, including amnesty for illegal aliens.

UPDATE: A spokesperson for Facebook told the Daily Caller this flagging was caused by an error in their automatic flagging system. “We’re very sorry about this mistake,” Facebook told the DC. “This ad was incorrectly disapproved by our automated systems. We approved it as soon as this error was brought to our attention and have turned off the automation that caused the error in the first place.”

DISCLOSURE: The author has been friends with Aric Nesbitt since 2007.