Someone wrote the word “douche” in red marker on James Franco’s star on the Hollywood Walk of Fame. 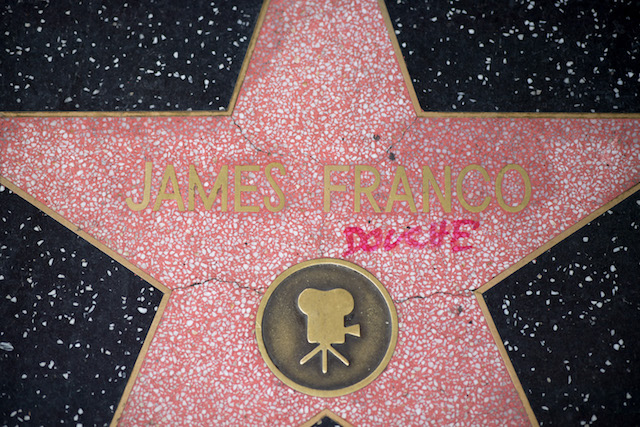 At this point a police report has yet to have been filed, according to public information officer Tony Im at the Los Angeles Police Department.

He said the department is waiting to hear from the victim, which in this case would be the Hollywood Chamber of Commerce. If the Chamber files a report, the LAPD would “pull surveillance video” from the area as part of its investigation.

“I will most likely file a police report. But we aren’t going to make a new star, because it’s just [written in] marker,” Ana Martinez, VP of media relations with the Hollywood Chamber of Commerce told The Daily Caller. “So it will be cleaned up.”

Martinez also said she hopes people will grow up and “stop defacing a historic landmark.”

Franco has been accused by several women of a variety of sexual misconduct. An article in January in the Los Angeles Times, detailed the accusations by five women against the actor.

One of the women, Violet Paley, called out “The Disaster Artist” star on social media for his alleged actions, after he wore a Time’s Up pin to the 2018 Golden Globes Awards show.

When asked about the allegations, Franco has said the women have a right “to be heard” because he believes in the #MeToo movement.

Update: Martinez reached out and told The Daily Caller that the “the star is cleaned up.”