In the neverending quest for clicks, news outlets depend on outrage stories to grab readers’ attention. In the case of a recent story about a young woman sporting a “Women For Trump” t-shirt with a black handgun in her waistband, CBS found a total of three Twitter users who disapproved — with one account having only a single follower — and decided to publish an entire article about it entitled “Woman’s gun-toting “graduation photo” sparks backlash online.”

The University of Tennessee Chattanooga student, Brenna Spencer, chose something unique for her graduation photo. Check it out below: 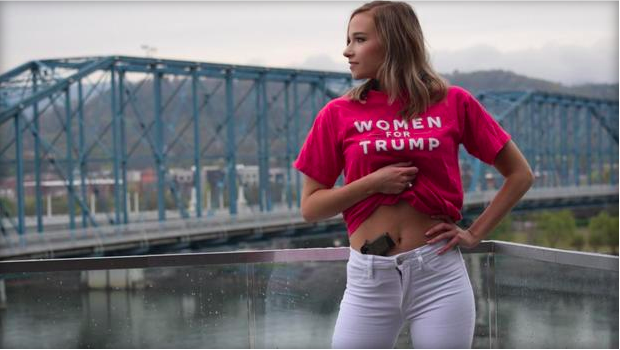 As Brenna Spencer proudly admits, “I don’t take normal graduation photos …” And good for her. Personally, I’m not sure why anyone else is particularly interested in how this woman decides to commemorate her graduation, but then again, I don’t work for CBS.

As the network notes, a total of three random individuals disapproved. One Twitter user, named “DadForChange,” said “using a gun to make a political point is irresponsible gun ownership.”

Another individual, “Jasmine Leroy,” who has a single follower on her account, thought the picture was meant to “irritate others and enhance your political point.” If irritating others was actually her point, I guess she succeeded.

“Hmm..heres a question, what point are you trying to make by sticking a gun in your pants, I would think you want to irritate others and enhance your political point.. Are you going to use the gun( because that’s why they were made). I’m sorry but I’m confused by your ignorance.”

Again, none of these accounts appear to be connected to any activist organization or politician. Instead, they can be seen at best as busybodies and at worst as a group of trolls.

In other words, the editors at CBS must have thought Tuesday was a rather slow news day.