A cop killer received a check for over $15,000 from a North Carolina county court in early April for a land deal, according to a Saturday report.

Assata Shakur, who is currently on the FBI’s list of most-wanted terrorists, received $15,351.39 from New Hanover County as compensation for a land deal with a private company. The court reportedly worked out the deal, after the company contacted Shakur because she is one of the last living members of the Freeman family who owns land near Freeman Park in Carolina Beach, N.C., according to Raleigh News & Observer.

Shakur, also known as Joanne Chesimard, was convicted for the murder of a New Jersey state trooper and escaped prison in 1979 after receiving a life sentence in a New Jersey state prison. She later fled to Cuba after hiding underground for years. Shakur, godmother of rapper Tupac Shakur, was most recently in the news after she was honored at The Women’s March, where they called her a “sign of resistance” and a “feminist figure” who fought sexism within the movements she worked. (RELATED: Meet The Cop-Killing Terrorist The Women’s March Is Bent On Honoring) 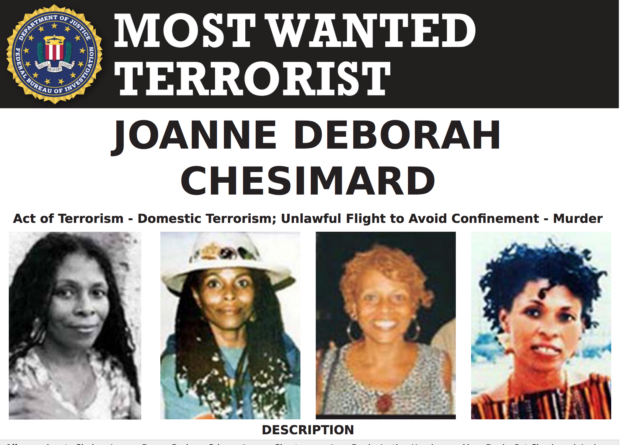 A judge reportedly signed the court order on April 3 after the final sale was delayed for nearly 10 years because Shakur’s whereabouts were unknown at the time. There was no legal reason why Shakur should not receive the money, the judge claimed, according to Fox News.

Shakur has a past of violent crimes against law enforcement officers and partnered with groups like the Black Panther Party and the militant Black Liberation Army. She was found guilty of first-degree murder, assault and battery of a police officer, assault with a dangerous weapon, assault with intent to kill, illegal possession of a weapon, and armed robbery.

She still remains on the list of most-wanted terrorists. The FBI is offering a reward of up to $1,000,000 for information directly leading to her arrest.