“I’m troubled by the timing of the book and some of the content that has been reported because I think it diminishes him” former assistant director of the FBI Ron Hosko tells TheDC. Hosko took particular exception with Comey’s detailed description of President Donald Trump’s appearance, including his likely use of tanning goggles, his hand size, and the length of his ties.

“To me that kind of salacious commentary diminishes Jim Comey, raises more questions about his true desire here,” Hosko continued. He added that Comey is a “carrier of the FBI brand” and is making the job of current FBI Director Wray much more difficult.

“Director Wray would rather be answering questions on the FBI’s current work, its mission, priorities, and challenges rather than having this rather cloud on his horizon, questions about Jim Comey.” Hosko also warned that Comey’s animus to the president displayed in the interview would stoke accusations that a “deep state” is attempting to undermine Trump and his administration. 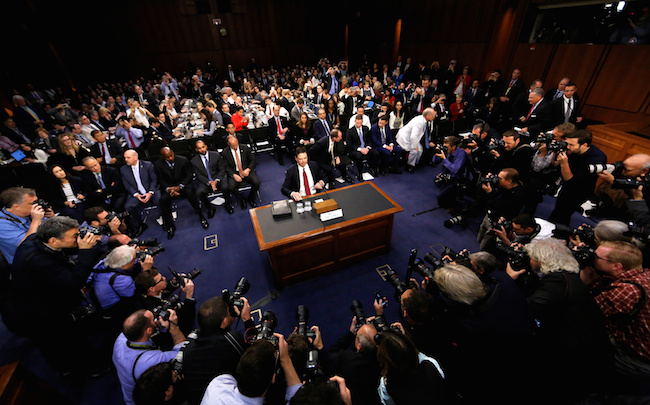 Robert Anderson, former executive assistant director of the FBI, noted to TheDC that he believes Comey is a “good man” that he “loved working for him” but expressed concern over his decision to speak about an ongoing investigation.

“Usually you don’t have anybody in the FBI talking about ongoing investigations,” Anderson said, adding that “if Jim says something in one interview, then says something in his book thats different, then gives a different version of it in another interview, and they use him as a witness which I’m sure they will, then that could become a problem” for the Russia investigation.

Anderson continued that “the biggest thing that bothers me about the interview itself is that Jim is talking about some of the issues he discussed with the president in confidence, thats a little shocking…that the former head of the FBI would do that.” The former executive assistant director noted that to him it showed that Comey felt so strongly that Trump is unfit for office that he was willing to break the usual norms of conduct for a former FBI Director.

Former FBI special agent and 25-year veteran Jack Garcia was particularly scathing after Comey’s interview. “This man has tarnished that position by offering positions and attacking the president of the United States,” he declared to TheDC, adding that it was “insane” for the former FBI director to offer an opinion on whether the Russian government had compromising information on Trump.

“Our mission and our job is only to state the facts, we don’t state opinions,” he declared, joking that “opinions are like assholes, everybody has one” and that “I am in touch with a lot of agents both current and former, they’re just shaking their heads.”

Garcia also took exception with Comey’s use of personal memos to memorialize private conversations with Trump and subsequently leaking them via a third party to The New York Times. “A man’s man would just go back and listen and say, ‘This is wrong what happened here’ or memorialize it in a proper document,” he said, adding “you have these amazing men and women in the FBI, if you really believe something is going on then sick them on him.”