I recently accepted an invitation from the 2-108th Cavalry Squadron of the Louisiana National Guard to join them on an extended field training exercise at Camp Shelby, Mississippi. The 2-108th and other units of the National Guard are ramping up their training in anticipation of more overseas deployments in the coming years.

No longer is the Guard just a strategic reserve force capable only of handling small domestic and humanitarian crises; they are now an integral part of the U.S. Army’s total combat force.

After spending four days in the field with these soldiers, here’s what I learned.

Throughout the four-day period, every soldier in the unit treated the exercise as though we were in a combat environment. When I first arrived, I had to be brought out into the field via an HMMWV (pronounced Humvee) because not only would the enemy be able to spot my civilian vehicle but also because my wife’s car would not make it through the rough terrain. I was immediately taken into the Squadron’s Tactical Operation Center (TOC) for a briefing of the unit’s current situation.

“This is where we are,” said Major Mike Poche, the Squadron’s Senior Operations Officer, known simply as “the S3”. He pointed to a small grid square on a U.S. Army-issued map of Camp Shelby. Major Poche gave me an idea of the route I had traveled to get there, and where the rest of the squadron was located. He also showed me some of the important terrain features and identified key landmarks like the medical tent and the latrines.

I slept outside like the rest of the soldiers. I was lucky enough to be given a coveted spot on top of Major Stephen Luebbert’s HMMWV. Major Luebbert is the Squadron’s Executive Officer, and during the time I was with the unit, he and the rest of the Squadron staff barely stopped to rest. 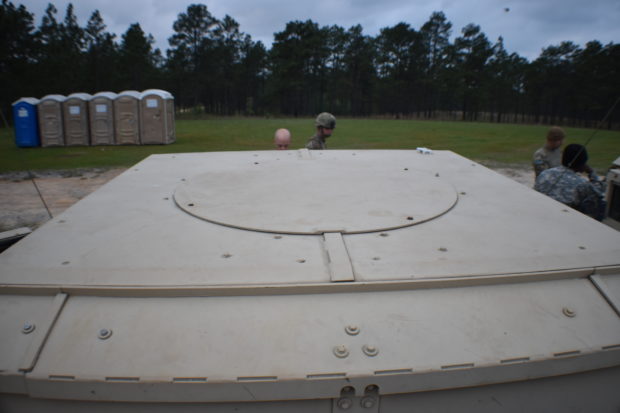 Just like they would do during a real combat deployment, the soldiers were all required to wear their full “battle-rattle” when not sleeping. This consists of a Kevlar helmet, body armor plate carrier and eye protection.

They Are Subject Matter Experts On Their Weapons Systems

Whatever you’ve heard about National Guard soldiers being somehow less proficient compared to their active duty counterparts is not quite true. Every soldier showed a great deal of expertise in his or her assigned duties. Whether it was the crew-serviced weapons systems such as the M2HB .50 caliber machine gun, or the communications and intelligence gathering equipment, each soldier is an expert at his or her job.

A perfect example is Staff Sergeant Malcolm Rochelle, a senior noncommissioned officer in the 2-108th’s Charlie Troop who is the leader of a 120 mm mortar team. Rochelle is cool and calm and has trained his mortar team to a sharp edge. He’s a great example of the Guard’s professionalism, but he’s hardly unique in the squadron.

Whether it’s the sniper section explaining their small-unit tactics, or artillery spotters explaining the finer points of target identification, everyone is on their A-game. It’s impossible to tell these soldiers only have, on average, one weekend a month to practice their skills. 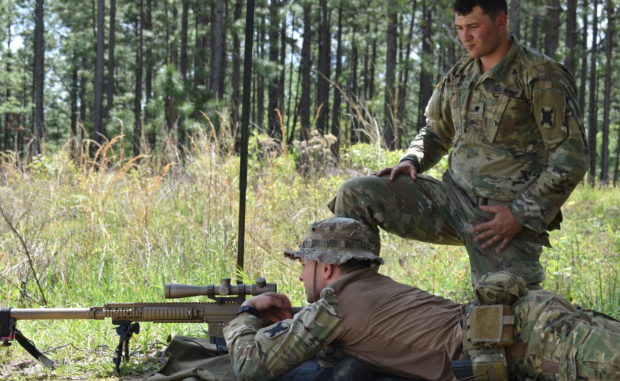 They Are A Tight-Knit Bunch

Admittedly, this wasn’t my first time meeting some of the soldiers. I have covered the 2-108th three times before, so some of the faces were familiar. However, I was still an outsider, which was made apparent by the fact that most members of the squadron have known each other, and trained with each other, for years.

As Master Sergeant Tim McKnight, the squadron’s operations senior noncommissioned officer explained, some of the Soldiers he deployed with to Baghdad in 2004-2005 are still in the unit. “I’m personally vested in these guys,” he explained after showing me pictures of the unit during their first deployment to Iraq in 2004.

This is an area where I believe the Guard may have an advantage over the active duty Army. While an active duty soldier might spend three years at a duty station before being moved, soldiers in the Guard tend to stay in their home unit for years, and in some cases even decades. That tight bond that can only be forged by years of working together to complete complex tasks.

They Are Intense Individuals

Major Luebbert, the Squadron’s Executive Officer and my “tour guide” when I was with the unit is relentless. Up before six, Major Luebbert is constantly addressing issues, checking up on ongoing operations, giving directions, taking care of (and entertaining) one civilian reporter, and drilling his junior soldiers on basic warfighting skills.

In the three hours of downtime we had on Friday, I took the opportunity to grab a nap in the grass as some of the gunners finished up at the range. Not Major Luebbert; he was in the TOC the entire time answering questions from the brigade headquarters, handling a situation regarding a solider with an emergency medical condition, and teaching the junior soldiers in the TOC to correctly call in artillery missions. 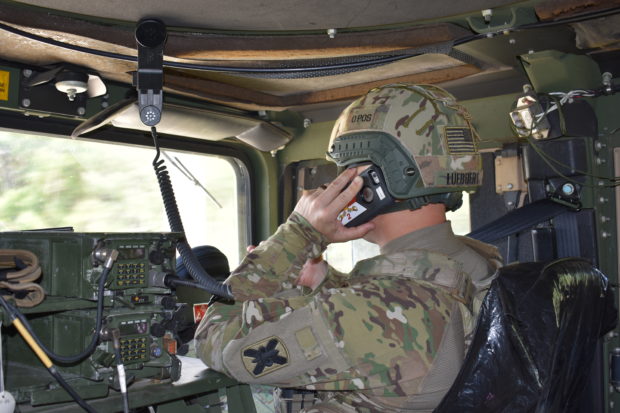 Major Luebbert is the rule, not the exception. Major Poche, the S3, has a similar intensity, as do the enlisted soldiers under his command. While I thought 5:45 in the morning was early, the soldiers working for Major Poche were already up, dressed in full battle-rattle, sucking down an energy drink, and walking through camp waking their buddies.

They Are Funny As Hell

One big take away from my four days with the unit is how much they laugh; I was constantly smiling. Major Luebbert, while demanding, is hilarious, and so are the vast majority of the soldiers. There’s always time for a joke, and a midnight “Major Payne” quote session between Major Luebbert, the squadron’s Sergeant Major SGM William Edwards, Edwards’ driver Specialist Ettienne Lewis, and I went on for a solid 30 minutes — even as mortar and artillery blasts rocked our HMMWVs.

I believe their sense of humor is a mechanism many of the soldiers use to get through tough times, sleepless nights, endless boredom and the general misery that accompanies living in the field. Almost every soldier was happy to be there, away from creature comforts, and getting down to the business of training for battle.

All Jokes Aside, They Are A Lethal Force

The 2-108th in particular and the National Guard in general are some of America’s premier fighting forces. National Guard reconnaissance units, like 2-108th, perform at the same level as their active duty brethren. This isn’t by chance or by accident. In the post 9/11 environment, the U.S. Army found itself stretched thin among Iraq, Afghanistan and its various other commitments outside the continental United States. As a result, the National Guard had no choice but to step in and relieve some of the pressure on the active duty Army.

National Guard Units from Louisiana and from all over the United States have made multiple deployments into combat zones. Currently, the Army’s model is that Guard units are on a five-year cycle, which gives them four years to train and one year where they are eligible to be deployed. However, depending on their mission and the needs of the Army, Guard units and individual soldiers may be called upon to deploy more frequently. 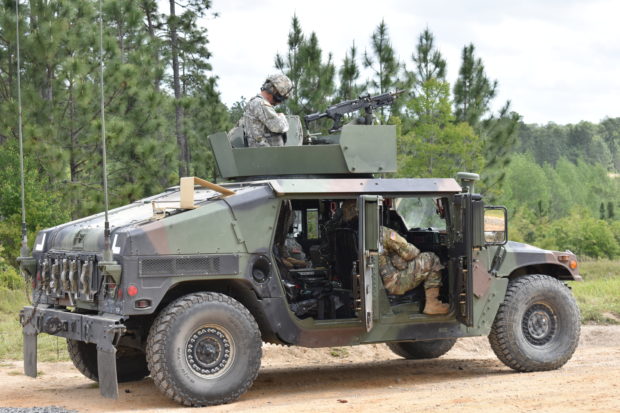 All of these overseas missions are done in addition to their roles within their home states. For instance, the 2-108th in Louisiana is extremely busy during hurricane and flood season, and just recently the 2-108th ceased recovery efforts in South Louisiana after flooding in 2017. “We came back from Iraq just in time for Hurricane Katrina,” explained Master Sergeant McKnight.

At the end of the day, I learned a lot about both the National Guard as an organization, and the individual soldiers that it’s made up of. Every soldier is sacrificing something to be there, but it’s not something they discuss. I am honored to have been given the chance to learn about the hometown heroes that leave their family, friends, and jobs behind to answer the nation’s call in times of need.

1
'Ready To Move On': David Axelrod Says Focus Group Of Democrats Didn't Care About Impeachment
US
2
German Authorities Find ‘Weapons Of War’ During Raid Near Radical Mosque
World
3
Geraldo Rivera Knocked Rudy Giuliani For Deteriorating 'Before Your Very Eyes' — The Audience Was Not Happy
Politics
4
Democratic Senator: 'I Hope Trump Is Assassinated!'
Politics
5
'World's Worst Cat' Is Up For Adoption
US