The fate of the 80-year-old comedian now lies in the hands of the jury after Judge Steven O’Neill handed them the case shortly after 11 am at the Montgomery Country Courthouse in Norristown, Pennsylvania, according to CNN.

The jury is made up of seven men and five women. 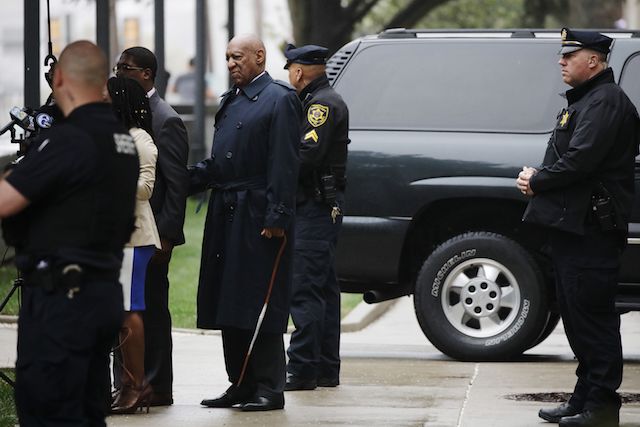 Actor and comedian Bill Cosby arrives for the start of jury deliberations in the retrial of his sexual assault case at the Montgomery County Courthouse in Norristown, Pennsylvania on April 25, 2018. (Photo by DOMINICK REUTER / AFP) (Photo credit should read DOMINICK REUTER/AFP/Getty Images)

Cosby, once again, stands accused of drugging and sexually assaulting former Temple University employee, Andrea Constand, at his home in Philadelphia in 2004. He did not take the stand to testify on his behalf, the same as in the first trial.

On Tuesday, defense closing arguments painted Constand as nothing but a “pathological liar, while co-counsel Kathleen Bliss said that the five other woman who testified in the trial were only looking for fame and money.

“You’re dealing with a pathological liar, members of the jury,” Defense attorney Tom Mesereau said of Constand. “You are.”

Prosecutors closed out the case stating that Cosby used his fame to lure woman into situations he could control. Constand and the five other women all painted similar situations.

“[Mr Cosby] knew that they were in an incapacitated state because he had done it so many times before,” Feden added. “This was his MO. This was a common scheme. This was the execution of his carefully practiced con.”

Last June, O’Neil declared a mistrial in the case after jurors failed to reach a verdict following six days of deliberations.

Cosby faces three counts of aggravated indecent assault. If convicted he could spend up to 10 years behind bars for each one of the counts.