A Washington Post writer gushed over first lady Melania Trump’s hat saying that “nothing else mattered,” in an op-ed Tuesday.

Robin Givhan, a staff writer and fashion critic for The Washington Post, praised Melania’s fashion-forward chapeau for meeting French President Emmanuel Macron and his wife Brigitte Macron Tuesday, in an op-ed for The Washington Post. Melania’s iconic hat was ordered by Hervé Pierre, who is the first lady’s official fashion consultant and previously designed her inauguration gown. Her hat was custom-made and used the same material as her white Michael Kors suit.

Melania wore the stylish wide-brimmed hat to greet the Macrons at the state arrival ceremony at the White House. She later wore the same ensemble while touring the National Gallery of Art and looking at a new exhibit featuring portraits by French artist Cézanne with Brigitte Macron. Needless to say, her hat stayed flawless throughout the day.

“Not even Chanel haute couture could compare to that magnificent halo of pure white light perched atop first lady Melania Trump’s perfectly groomed head. Nothing else mattered. There was nothing else,” Givhan wrote.

“That hat, broad-brimmed with a high, blocked crown, announced the first lady’s presence as boldly and theatrically as a brigade of trumpeters,” Givhan also noted. “It was the bright white hat of a gladiator worn on an overcast day, a kind of glamorous public shield when sunglasses would not do at all. That hat was a force field that kept folks, the wrong folks, from getting too close.” 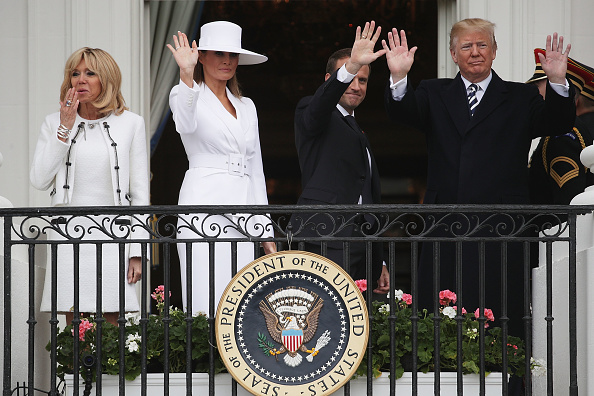 “It was a diva crown. A grand gesture of independence. A church hat,” the fashion critic gushed. “The Lord is my shepherd. Deliver us from evil. Amen.”

American taxpayers do not pay for the first lady’s haute-couture wardrobe.