The 200th anniversary of Karl Marx’ s birthday will be upon us soon and you can expect a plethora of articles and news segments about him, most of which will be praising him as a great genius whose great vision was, unfortunately, misinterpreted or misapplied by his followers. No doubt The New York Times will be foremost in so far as it ran a series of articles last year about how wonderful the totalitarian system of the Soviet Union had been. (The citizens even allegedly had better sex. No, really.) Yet, no other intellectual has been the cause of so much devastation in lives and material wealth.

This catastrophe is no secret. It is thoroughly documented by both historians and those who have (and are) living through the implementation of Marxism.

So one would have thought that after the collapse of the Soviet Empire and the horrific revelations of the Gulag, the Pol Pot killing fields, the Cuban diaspora and the Cultural Revolution’s Red Guards, etc., Marxism was one less nightmare that humanity had to worry about, delegated to the cobwebbed shelf containing the Inquisition, the religious wars, the Black Plague, the Nazis, the burning of witches and heretics, and the endless wars over a miserable piece of real estate. But that is not the case and we see evidence, here and there, that their influence has returned. In some European countries like Italy and France, Russia and Greece, the Communist parties even command a large following (particularly during an economic crisis; the reader may remember that during the Great Depression the Communists and Fascists proliferated). A few years back in America there was the Occupy Wall Street movement as we saw the media drooling over the participants; now we have the Antifa thugs.

Currently, hundreds of Antifas waving the hammer and sickle flag physically assault people, shut down political and social events that they consider “fascist,” indulge in vandalism, prevent free speech, engage in cultural cleansing, falsify historical facts and toss around accusations of “fascism” like it was confetti. It speaks volumes on the blindness of fanatics in that although Antifas declare themselves to be anti-fascists, they dress all in black. Just like Mussolini’s Blackshirts. And conservatives do nothing about them.

Just as bad, we see Communist professors openly indoctrinating their students in universities and even high schools and middle schools. (Read David Horowitz’s The Professors). And, again, conservatives do nothing.

Marxism is essentially an economic doctrine, yet Marxists are not economists. Their expertise lies in philosophy, journalism, law, political science, even religion and, of course, sociology — all specializing in verbal diarrhea. Some of them cannot even balance their checkbook but demand that the country’s economy be handed over to people like themselves. Mention basic economic terms like Pareto efficiency, Cournot’s duopoly or marginalism and Marxists will stand there, open mouthed with glazed looks on their faces. If you tell them that businesses utilize algorithms for decisions, they will keep staring and may even ask you, “What’s an algorithm?” Their concept of capitalism is a laughable caricature totally devoid of reality, but satisfying to their ego: their depiction of a capitalist is the head of a company who is perpetually snarling, overworking his employees to death while he does nothing except tightly hugging stacks of money (this infantile caricature is widespread in Europe—and Hollywood). Marxists are intellectuals who are highly educated, but are also monumentally stupid.

Here is a red pill for Marxists (pun intended). Let us put Marxist theory to the test. The core proposition of Marxism is that the imposition of Marxism improves the lives of human beings. Now, let us look at the record. Communism was established in Russia, China, Mongolia, North Korea, Vietnam, Hungary, Laos, Cambodia, Cuba, Estonia, Poland, Ukraine, Bulgaria, Yugoslavia, Albania, Germany, Lithuania, Romania, Czechoslovakia, Poland, Latvia, Armenia, Uzbekistan, Tadzhikistan, Tibet, Kazakhstan, Grenada, Turkmenistan, Ethiopia and Kyrgyzstan. That’s 28 countries. 28 case studies. 28 experiments. Each with its own customs, history, languages, geography — none of which are supposed to matter, anyway, according to the doctrine.

In every single instance, the standard of living — in every level of society and by any standard that one cares to employ — plummeted. While proclaiming itself to be truly egalitarian, a privileged aristocracy (what in Yugoslavia Djilas called The New Class and in Russia was called the Nomenklatura) came into being, composed entirely of members of the Communist Party. While many Ukrainians, Chinese, Cambodians, Ethiopians and Koreans starved to death, the new class feasted on fish, fruit, meats and all sorts of imported delicacies. In other countries, specifically East Germany, Poland, Hungary, Tibet, Cuba and Czechoslovakia, popular uprisings against the repressive Communist regime took place, which were put down through military means by the new aristocracy. An all pervasive vicious, repressive, secret police was created in order to suppress the people, who were spied upon constantly by the Communist government.

In every single instance, the rule of law vanished as the Party members murdered tens of thousands, sometimes simply on a rumor. Property was stolen or destroyed. As that murdering psychotic Che Guevara stated, “To kill a man we don’t need proof of his guilt.” Militarism became the order of the day. Slavenka Draculic pointed out that women in Communist countries were humiliated because the government made more tanks, but not sanitary napkins.

In every single instance, workers were ordered to “volunteer” to work extra hours, usually at no pay, or face execution while being told that workers had never had it so well.

In several countries, specifically Russia, Latvia, Estonia, Tibet, Lithuania and Cambodia, genocide took place. The victims did not think of themselves as better off under Communism.

Interestingly, East Germany and Romania revived the policy of slavery in that it sold individuals to the West.

As it has often been said, a picture is worth a thousand words. Do you see the difference between North Korea and South Korea? 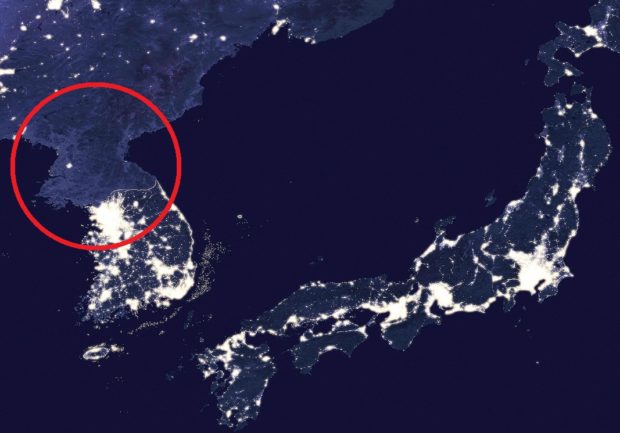 At some point, if you are a rational person, you have to come to the inevitable conclusion. Nonetheless, one will still find the intellectual who insists that Marxism wasn’t properly implemented and if we would only hand over all power to him, unquestioningly, we would have a Marxist heaven on earth because of his superior intellect. I don’t think so.

A personal note: I like to look at the Miami skyline and like to think that that is what Cuba would have looked like today if there had been no Communism.

Armando Simón lives in Orlando and is the author of “A Cuban From Kansas,” “The Cult of Suicide and Other Sci Fi Stories” and “The Only Red Star I Liked Was a Starfish.” They can be obtained at Amazon, Kindle, Lulu and Barnes & Noble.