A majority of Americans have concerns about what has come to be known as the DC “Swamp,” and these concerns are shared by both Democrats and Republicans, according to a poll released Wednesday.

The poll was commissioned by the Ear to the Ground Listening Project and was conducted by McLaughlin Associates, which surveyed 1,000 likely voters.

A second McLaughlin poll published at Breitbart on Wednesday found that most believe the Mueller investigation is bogus and would like to see it ended. Democrats appear to already know this, and are toning down their rhetoric on “Trump/Russia collusion” because voters aren’t buying it. 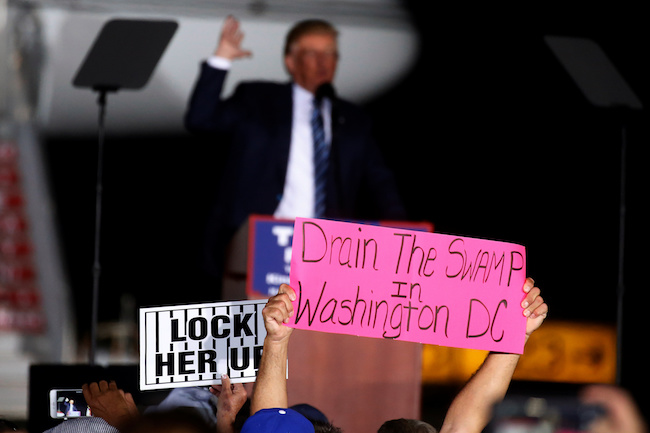 A man holds up a “Drain the Swamp in Washington DC” sign as Republican presidential nominee Donald Trump attends a campaign event on the tarmac of the airport in Kinston, North Carolina, October 26 2016. REUTERS/Carlo Allegri

According to the poll, almost half of Americans (46 percent) blame the GOP for allowing the Swamp to survive. This includes 41 percent of conservatives, 44 percent of moderates and 50 percent of independents. Only 17 percent believe the GOP is helping to drain the Swamp. Fifty-three percent also believe that DC politicians are not worried about the loss of freedoms average voters fear, according to the poll.

Most people, including moderates and liberals, believe lobbyists, GOP members and bureaucrats are the ones most to blame for keeping the Swamp alive. Trump voters and conservatives place the most blame with the media, Democrat leadership and lobbyists.

Most notably, 80 percent of all voters believe, “…that the American traditions of freedom and individual rights are being threatened by growing social movements, public bullying and increasing political violence.” Only 14 percent disagree.

The Breitbart poll focused on American attitudes regarding the investigation into Trump/Russia collusion being carried out by former FBI Director Robert Mueller. The poll found that a majority of Americans, by a margin of 51 to 33 percent, believe that Mueller has not found any “real evidence of corruption by the president.” Americans also believe the investigation has “overstepped its purpose” and are losing their patience with it.

In discussing this poll on Wednesday’s radio show, Rush Limbaugh zeroed in on that 51 to 33 percent statistic. He observed that Democrats were starting to realize that voter patience was running out with Mueller.

“I think it dovetails with the internal polling by the Democrat Party,” Limbaugh said. “We’ve been chronicling with you for the past week how Democrats are urging candidates to get off of this, to stop talking about it, and it had to be because their internal polling numbers on this are so bad.”

The news cycle continues to report each step in the probe blow-by-blow. But despite widespread Democrat boasting of an anticipated “blue wave” in the midterm election, according to this poll, Democrats only enjoy a 0.3 percent advantage over Republicans in a generic ballot, which is within the margin of error.

Polling “likely voters” is the least biased and most accurate method of polling, but because it requires more work than a “random sample” of adults. A disproportionate number of women and young people respond when a poll is conducted by random sample, and those groups tend to be more liberal, even among independents. Because it is random, the sample could also include illegal aliens.

Sometimes that bias is significant. For example, an Economist poll cited in my study queried 570 Democrats and only 360 Republicans, a 58 percent difference. Overall, the 7 polls cited in that study contained an average of 29 percent more Democrats than Republicans. It is thus not surprising that so many presidential polls were so far off in their predictions of the 2016 election. This latest Ear to the Ground poll suffers no such sampling bias.

The Ear to the Ground Listening Project describes itself as “a collaboration between individuals in the academic, market research, and public policy arenas seeking to understand and reflect the voice of the American people through the tools of market research.”