On Monday, Kanye was back at it, tweeting statements from other people about Republicans freeing slaves and the perils of the welfare state.

Kanye sent out a series of screenshots featuring text conversations from various friends sending him political quotes. The first quote came from an unidentified Kanye contact named Steve. In a series of texts, Steve said that Republicans “freed and protected” slaves and “helped black people.” Steve went on to say that Democrats “protected the rights of the slave owners.” Kanye responded that he was going to tweet the comments.

The tweet went immediately viral and initiated a chain reaction of criticism. Fellow recording artist John Legend sent a series of critical texts to Kanye in which he refuted Steve. Legend reminded Kanye that President Lyndon B. Johnson passed the Civil Rights Act. Legend also called the Republican Party “the party of the Confederacy.”

Kanye then tweeted ideas from conservative economist Thomas Sowell. A contact named “Tmills” sent Kanye a variation of a Sowell quote. Sowell is a conservative thinker, economist and philosopher who is a Senior Fellow at the Hoover Institution at Stanford University. The quote attacked the welfare state as not being for the “masses” but for the “egos of the elites.” It also claims that socialism has a “record of failure so blatant” only intellectuals could ignore it. 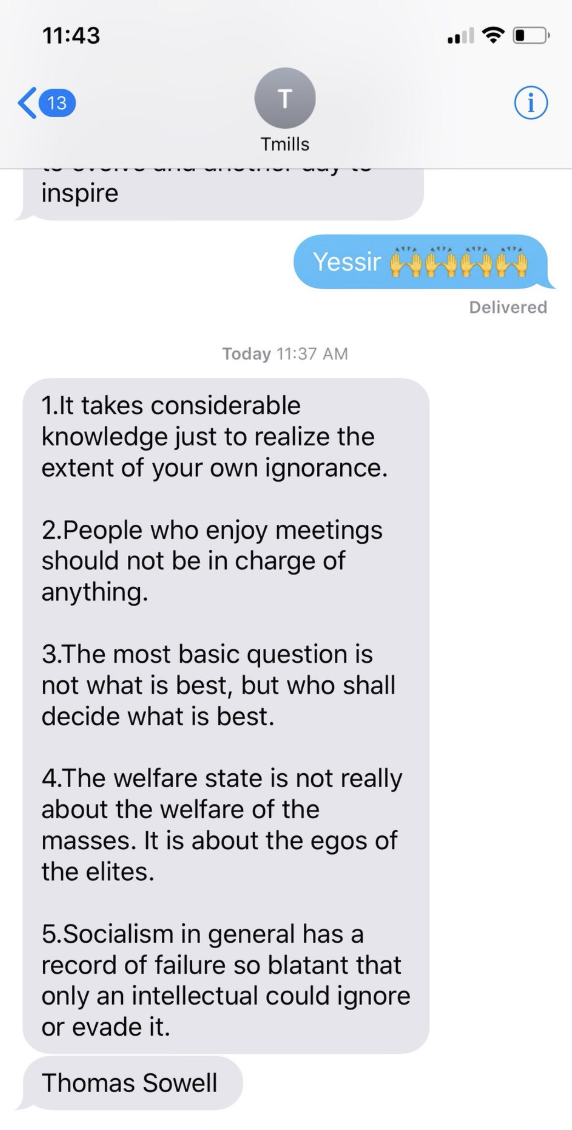 Kanye’s swing rightward has been partly precipitated by interactions with conservative student activists Charlie Kirk and Candice Owens. Kirk, the founder of conservative student group Turning Point USA, and Owens, the communications director of the group, were spotted with Kanye this weekend after the rapper tweeted a number of complimentary comments about Owens.

Woah, looks like my pals @realcandaceO and @charlieKirk11 hanging with @kanyeWest yesterday. This should be interesting! pic.twitter.com/a57WvclmCh