Wolf hurled insults and bullied members of the Trump White House, going so far as calling Sarah Sanders a “liar,” clumsily attacked Kellyanne Conway and made light of aborting a fetus, saying you should not “knock it ’til you try it.”

However, the comments would not be shocking based on Wolf’s Twitter activity over the last few years. According to a report by the Daily Mail, Wolf has deleted tens of thousands of tweets in the months leading up to her speech in front of some of America’s most influential media elites.

“Michelle Wolf’s Twitter showed the comedian had over 20,000 tweets in June 2017, but now only has 376,” according to the Daily Mail report, “The controversial comedian deleted thousands of tweets in which she poked fun at the Trump administration and made vulgar comments about celebrities.”

Some of those comments mirror the offensive comments she made Saturday night.

She also made light of late Supreme Court Justice Antonin Scalia’s death, saying it was good that it he died after Beyonce’s Super Bowl halftime performance. 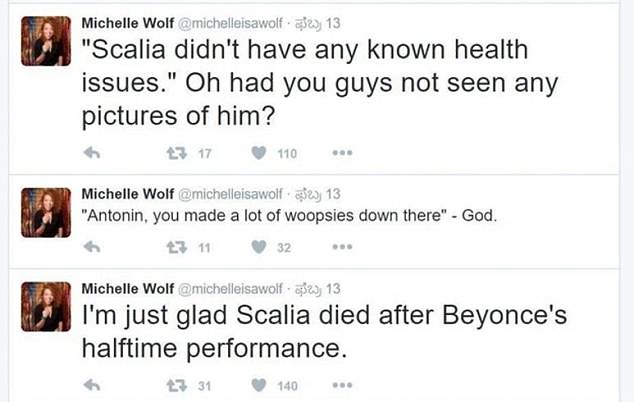 She didn’t only mock conservatives. Wolf also deleted glib comments comparing Serena Williams to a man and about the benefits of racism.

Since the dinner, Wolf has come under heavier and heavier scrutiny.  The White House Correspondents Association apologized and disavowed Wolf’s performance Sunday night, and scores of reporters and high-ranking members of the administration have distanced themselves from her remarks. The president called the dinner “DEAD” after her remarks.

The White House Correspondents’ Dinner is DEAD as we know it. This was a total disaster and an embarrassment to our great Country and all that it stands for. FAKE NEWS is alive and well and beautifully represented on Saturday night!