Sanders and Ryan had a tense moment in the briefing room after Ryan insisted that Sanders was “blindsided” by Rudy Giuliani’s Fox News interview the previous evening. (RELATED: Giuliani: Trump Reimbursed Cohen For $130,000 Stormy Daniels Payment)

Sanders slammed Ryan for purporting to know how she feels, retorting, “with all due respect, you actually don’t know much about me in terms of what I feel and what I don’t.” (RELATED: Sarah Sanders Wipes The Floor With April Ryan)

Ryan responded to the comments several times throughout the day on CNN, but she went beyond the pale on Don Lemon’s show when she suggested that Sanders’ words implied a physical altercation.

“If she’s upset about [my question] then that’s fine, I understand people in the White House are very upset,” Ryan said. “But what I will say to you is that…for her to say, ‘you don’t know me,’ in certain quarters in this nation that starts a physical fight.”

“I was very shocked, it was street. I will even go beyond that — it was gutter,” Ryan continued. “She can be mad at what I say right now: tough.”

Ryan also attacked Sanders’ relatively young age, stating, “You know, I feel like she’s feeling some type of way, she’s catching feelings from this weekend…she’s 35, I’m 50, I’ve been at the White House for 21 years to her what — one?”

Ryan also tweeted about Sanders apparently using fighting words, noting that in Baltimore someone saying “you don’t know me” will start “fist fights.”

“She needs to know what she is saying,” Ryan tweeted. “Take off that pretty ring to fornthe street fight.”

The mayor of Baltimore, apparently a friend of Ryan’s, added, “I already took my earrings off and Vaseline in my purse.” 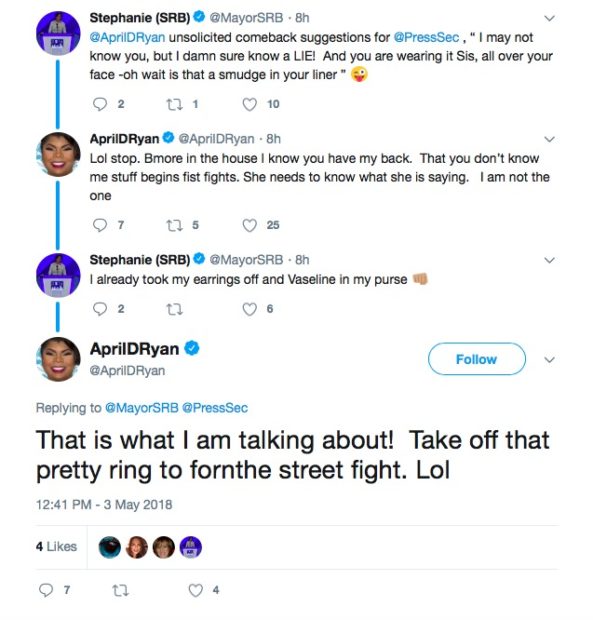