John Sigler knows a thing or two about guns. As past president of the National Rifle Association, his opinion matters. So what did he think of the round-body, 20-gauge Excalibur from AMARS di Abbiatico & Salvinelli?

We were about to find out.

We met Mr. Sigler, his wife, Ingrid, and their German Shepherd, Thea at the Pintail Point sporting clays course in Queenstown, Maryland for the express purpose of having him put the FAMARS Excalibur through its paces and share his assessment of the shotgun. We figured that if a shotgun enthusiast was going to write a check for a $35,400 to buy a top-of-the-line FAMARS Excalibur it would be helpful if they received some sage wisdom beforehand from a guy in-the-know. In fact, even you were opting for the base Excalibur at $30,450 we thought you’d still like to hear from Mr. Sigler about the gun. 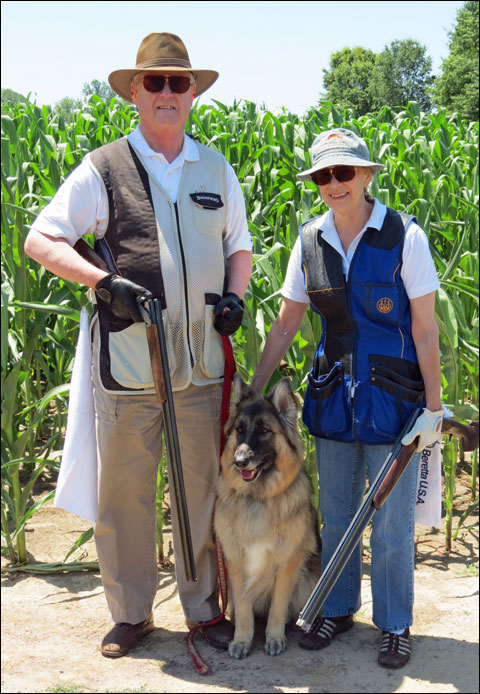 John and Ingrid Sigler with their dog, Thea

The rounded under curves of body emphasized the Excalibur’s lissome weight of approximately 6¾ pounds. Although the receiver is hand chiseled from solid steel, FAMARS can craft one for you from titanium that yields even lower weight while rewarding the fortunate owner with superb handling dynamics.

Our Excalibur, with its squared wood-to-metal seam, looked like a boxlock. A model called the Excalibur Sideplates, however, gives the engraver greater license. 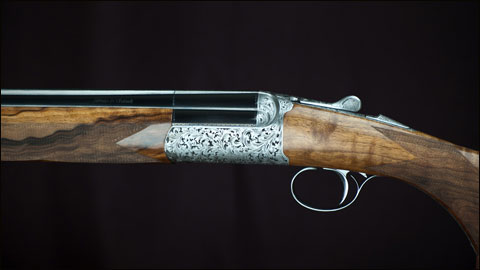 The Excalibur was supplied to us by FAMARS USA — the American component of a partnership forged in 2010 with Paul Mihailides, a real estate developer and best gun collector. FAMARS USA is based in Coventry, Rhode Island. Whereas FAMARS had traditionally relied on a handful of dealers in the U.S., a fully established presence here had been a long time coming, as otherwise shotguns would typically be returned to Italy for service. The mission of FAMARS USA is to expand the company’s servicing abilities and product offers, with new products including patented knives, gun equipment and accessories, clothing, and sportsman jewelry. With that in mind, FAMARS USA always has a revolving inventory of FAMARS firearms on hand, making it a veritable candy store of gorgeous Italian shotguns.

FAMARS was founded in 1967 by Mario Abbiatico and Remo Salvinelli. The men initially concentrated on small-bore shotguns with exquisite engraving — creating the FAMARS mystique of jewel-like hunting shotguns with remarkable handling characteristics. Nine years later, they kicked over the serial numbers with a new name  FAMARS, for Fabbrica Armi Mario Abbiatico e Remo Salvinelli, based in Gardone Val Trompia. Regardless, they remained devoted to stellar engineering and aesthetics with that particular Italian flair of purpose and beauty.

In the late 1970’s FAMARS developed the Jorema, an elegant best-quality, Boss-style sidelock over-under first made in 12 and .410 gauges and then also in 20 gauge. At around the same time, FAMARS lays claim to having patented the pinless sidelock so that engravers can ply their trade on a continuous stretch of steel. 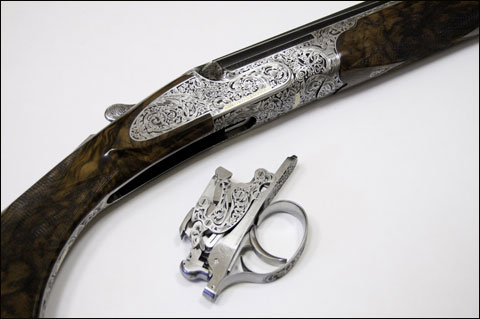 Fast forward to 1993 when the company introduced the Excalibur as its first dedicated competition gun. FAMARS said that great attention was paid to the Excalibur’s shooting and balance — a claim that would be difficult to refute after shooting it. To emphasize the Excalibur’s competition pedigree, it was built with a single, detachable trigger.

The FAMARS Rombo, however, stands as the pinnacle of their engineering prowess. The shotgun has four integrated barrels in either .410 or 28 gauge. It weighs 7½ pounds. An Anson & Deeley type action is fitted with a brilliant, intricate mechanism that supports consecutive barrel firing using a single trigger. The limited-edition Rombo looks as though it should appear in a royal portrait of King Louis XIV. 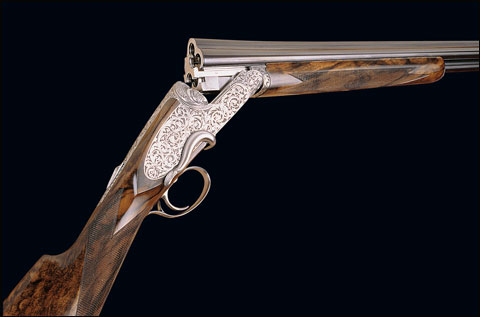 Throughout the FAMARS portfolio, a distinct aesthetic shared among the guns makes them more of a family of shotgunsrather than individual products. Visually, it’s the museum-grade engraving lavished on the outside and the actions. The guns convey a rarified sense of balance attributed to that “best gun” class of shotguns.

Even among “best guns” though, FAMARS are singular. Perhaps the only way to convey the difference is to compare the sunlight in Italy and England.

With that in mind, we set out on a glorious sunny morning at Pintail Point to evaluate the FAMARS Excalibur.

The course at Pintail Point is set among the celebrated wetlands of the region known for waterfowl hunts. The target presentations are moderate. Overall, Pintail Point provided a neutral venue for sorting out the FAMARS Excalibur. 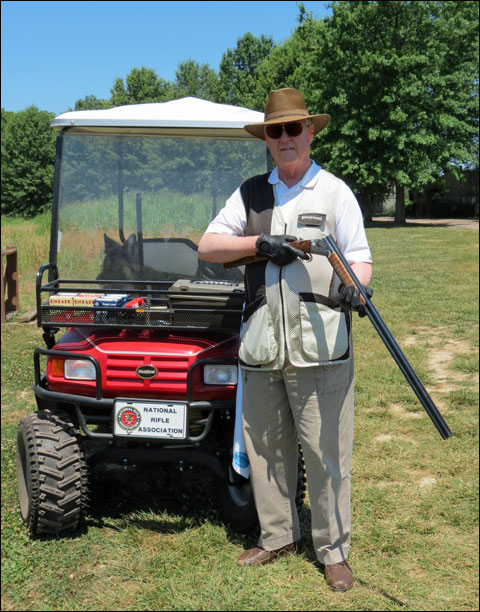 John Sigler with the FAMARS Excalibur

Over the ensuing two hours, Mr. Sigler shared his experiences with the gun…

“It’s well balanced. It’s certainly appealing to the eye and it handled well.”

“Some targets surprised me, but the gun was right there.”

“It’s a soft-shooting gun, especially without a recoil pad. It’s the way a 20-gauge is supposed to feel.”

“The one downside is that it doesn’t have a selective trigger.”

“I’ve become accustomed to screw-in chokes, but this gun is choked so that it would make a good sporting gun and a field gun.”

“If someone were to invest in that guy, they would have a good overall gun — just as good on quail as on clays targets. The gun shot dead-on.”

“The engraving is fine.”

“The continuity of the trigger guard and the grip cap is very good.”

Of course it’s always best to shoot a high-priced gun for yourself before making the purchase. FAMARS usually exhibits at premium shooting events along the East Coast such as the Southern Side by Side, the Thanksgiving Shootout at the M&M Shooting Preserve, or the Autumn FITASC Tournament in New Paltz, New York. Stop by and ogle.