Energy Secretary Rick Perry’s office notified Congress he spent just under $10,000 to refurbish his and his deputy’s office, according to letters sent to lawmakers Friday evening, which by The Daily Caller News Foundation obtained.

Perry spent $4,652 reupholstering furniture and painting his office, while Deputy Energy Secretary Dan Brouillette spent $4,993 doing much of the same to his office. The Energy Department’s (DOE) general counsel sent the letters to Congress out of an abundance of caution.

“In the interest of transparency, this letter serves to inform you of the recent renovations and the Department’s concerns related to the GAO’s opinion,” DOE general counsel wrote to Sen. Lamar Alexander, a Tennessee Republican and chair of the subcommittee overseeing Energy Department funding.

GAO “expanded the scope of this provision to apply to virtually any expense associated with a Presidential appointee’s office space,” to include even SCIFs — not exactly office furniture, the general counsel wrote. Before April, federal officials didn’t consider spending on, say, security requirements, like SCIFs, to require congressional notification.

DOE’s letter also detailed nearly $3.3 million in renovations to the Forrestal building, the department’s D.C. headquarters. DOE did not previously report these expenditures to Congress because they did not meet the definition of office furnishings under federal law — that is, until GAO issued its ruling.

“This opinion on Section 710 has created ambiguity and uncertainty on what does and does not need to be reported when updating our building in the future,” DOE said in an accompanying statement.

Included were renovations to staff offices, a new reception area and a conference room. The sheer cost of renovating the Energy Department headquarters illustrates the high cost of maintaining older federal buildings in Washington, D.C.

However expensive Energy Department renovations under Perry may seem, Obama’s administration spent much more in the eight years it controlled the executive branch. Perry gave a short list of examples of Obama Energy Department projects.

A sampling of Obama administration Energy Department renovations to the Forrestal building comes out to more than $10.3 million. 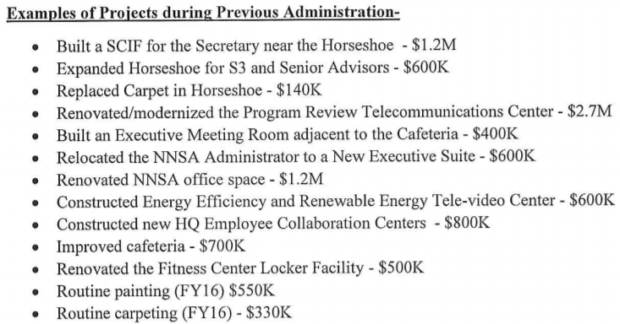