South Korean police took action Saturday to prevent defectors from launching balloons filled with leaflets critical of the Kim regime into the North, an act Pyongyang has described as an “act of war.”

In the wake of the landmark inter-Korean summit last on April 28, the North and South Korean leadership agreed to stop dropping propaganda leaflets — decidedly much more of a concern for North Korea given the regime’s need to tightly control the flow of information into the country to keep the people in submission. While the liberal South Korean government is determined to secure peace with a murderous regime, defectors and activists assert that they will “continue to work for the North Korean people.”

At the planned launch Saturday, a few hundred police officers were dispatched to Paju near the Demilitarized Zone (DMZ) to thwart the launch as well as prevent confrontation between the activists and opposition forces, which accused the former of trying to start a war with the North. “Stop provoking a war,” they cheered, according to AFP.

The authorities surrounded the vehicle where thousands of flyers and leaflets were kept, preventing the activists from unloading them. The police justified their actions by citing agreements made at the summit, as well as statements made by the South Korean Ministry of Unification. 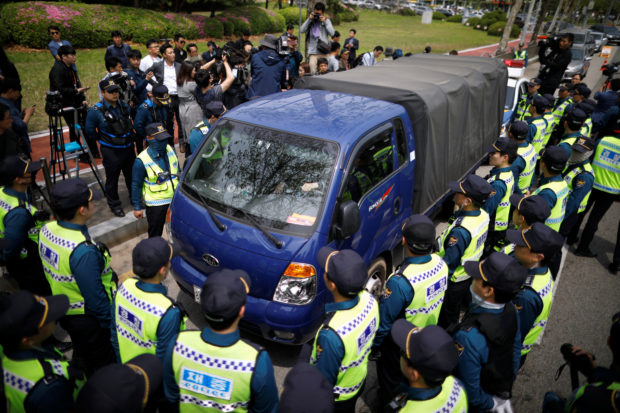 “The distribution of leaflets toward North Korea directly violates the spirit of agreement of the Panmunjom Declaration agreed by the South and North Korean leaders for the peace and prosperity of the Korean peninsula,” the Ministry of Unification said Friday, ordering activists to “immediately” suspend their operations.

Park Sang-hak, a North Korean defector and a leader of the activist group sending leaflet balloons into North Korea, warned that South Korea has become “intoxicated by Kim Jong Un’s peace offensive.” Kim’s approval rating in South Korea spiked from just 10 percent in March to nearly 80 percent as of this week, according to a recent poll. Park swore to “let North Koreans know the truth” and “bring an end to the North’s Kim Jong Un regime.”

“We are carried away by Kim Jong Un’s sudden deceitful peace offensive,” he said after police intervened in Saturday’s launch, “but just a while ago he blackmailed us and the whole world with nuclear and missile provocations, while killing his own family members and executives.” Saturday was not the first time Park and others have clashed with police over this issue.

Several of the defectors involved in the launches have been doing so for more than a decade and were personally inspired to defect by leaflets dropped by the activists who came before them.

For Lee Min-bok, the leaflets were the trigger for his “awakening” that ultimately pushed him to defect to South Korea in the mid-1990s. “I really believed that Kim Il Sung was the center of the world and he was making everything right and great for us,” Lee explained to Reuters. “Realizing what I had learned, heard and read were all lies, I decided to defect to the South to live with the truth.”

The South Korean government is concerned with preventing a military clash at the border, as a leaflet drop in 2014 actually led to a shoot out at the border between North and South Korean forces. It is also protecting the interest of border towns, which are worried about their safety. The government has taken criticism for putting North Korea’s numerous human rights violations on the back burner in pursuit of peace and whatever that might include.