U.S. crude oil production could top 12 million barrels per day by the end of 2019, according to the latest Energy Department (DOE) forecast released on Tuesday.

The U.S. Energy Information Administration, the DOE’s statistics arm, (EIA) projects U.S. crude output would grow by more than 1.5 million barrels per day over the next two years, primarily as the result of abundant shale oil and gas reserves. 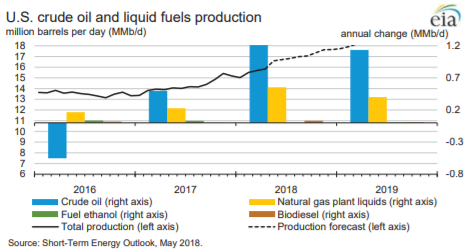 The Trump administration has harnessed “energy dominance” as part of its foreign and domestic policies. The White House has aggressively pushed a deregulation agenda that’s targeted Obama-era regulations seen as harmful to energy production.