The Sentencing Council for England and Wales has drafted new guidelines proposing prison sentences of between 26 weeks and six years for social media posts deemed hostile toward a race, religion or sexual identity.

The proposals have been made in relation to the Public Order Act, which prohibits all activities “intended or likely to stir up hatred” against minority groups, including transgender people. Many of the examples in the document reference social media use.

Those “in a position of trust, authority or influence” abusing their position to stir up hatred are facing the harshest sentences. The suggested punishment will also be more severe if the offender has a particularly large online following or if he or she is associated with any groups promoting hatred based on race or religion.

Three types of offences are considered the most serious. The first of these, understandably, are “cases where activity is encouraged which threatens or endangers life.” However, more surprisingly, the other two categories are “cases involving widespread dissemination of material and/or a strong likelihood that many would be influenced.” 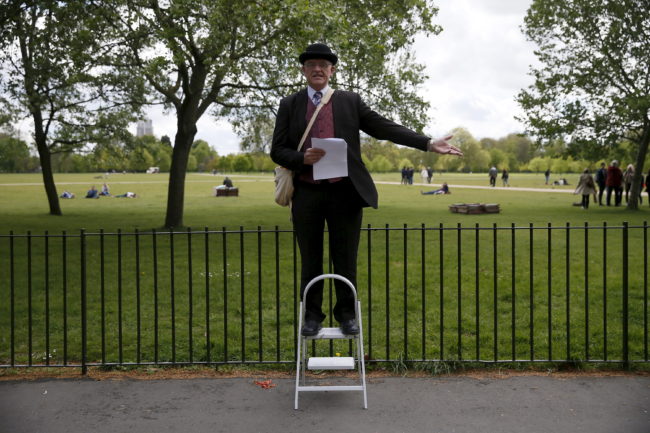 Matthew, 60, a speaker on Christianity, gestures on a stepladder at Speakers’ Corner in Hyde Park, London, Britain May 3, 2015. REUTERS/Stefan Wermuth

“Volumes of these offences are extremely low and there have been no offenders sentenced for some offences,” the document says. However, the Council still believes that the use of social media channels as vehicles for hate crimes is a growing problem, “given the recent social climate and an enhanced focus on this type of offending.” Their proposals are the start of a three-month consultation process.

In August last year, the UK Crown Prosecution Service (CPS) announced that it intended to punish online hate crime as seriously as personal, face-to-face abuse. They threatened to treat offences via major social media platforms the most strictly. In October 2016, CPS notably determined that a hate crime needs only to be so perceived by a victim, without the need for objective evidence.

In January this year, Germany began enforcing a law demanding social media companies to remove hate speech and fake news from their platforms. This legislation is currently being revised, following criticism that press freedom was negatively impacted, after more content was blocked than necessary and a satirical magazine’s account was suspended.