An off-duty policeman’s heroism is being celebrated this week after he saved a baby’s life.

The K9 deputy, who was returning home after his shift, pulled his car behind the frantic woman’s vehicle and discovered a baby who was barely breathing.

“The first words out of [Crowell’s] mouth were, ‘Don’t let my baby die,'” Nix recalled at a press conference Thursday.

The officer administered CPR to the three-month-old boy, but the infant didn’t respond to the lifesaving measures. Nix then sped to nearby Ocala Regional Medical Center.

On its official YouTube page, the Marion County Sheriff’s Office praised the hero, saying, “Deputy Nix delivered the child to medical personnel, who then began treating the child. We are happy to report that baby Kingston is doing very well and doctors say he will make a full recovery!!”

Social media has lit up with images of the officer and baby, who is called King, along with the mother’s gratitude to the man who saved her son’s life. 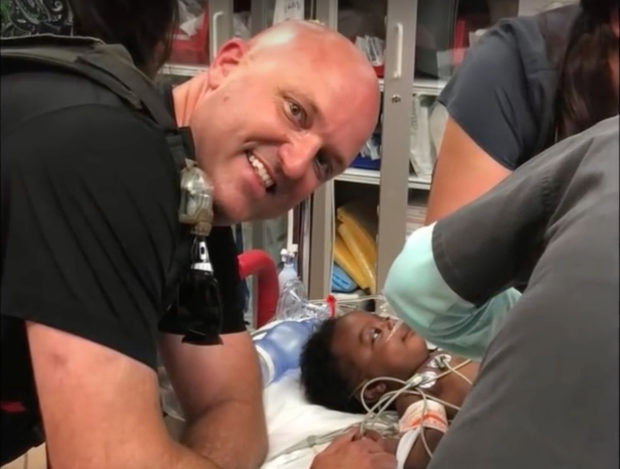 Crowell posted to Facebook, “Let me just say that yesterday GOD showed me just how real he was. My son KING was barely breathing, & fighting for his life. … My sister & I noticed an officer sitting at a red light & we got his attention. With his fast thinking HE & GOD saved my son. His word to me was ‘Don’t you worry, I will not leave until I help save your son! GOD had me in the right place because he knew you needed me.”

Officer Nix has since visited young King in the hospital, accompanied by his wife.

“THANK YOU OFFICER JAY NIX FROM THE OCALA SHERIFFS OFFICE K-9 unit !!” the thankful mom wrote. I just wanted the world to know how great this officer is, & how GREAT GOD is…….. not all officers are bad, he’s one of many good guys ❤️❤️ KING & I WILL FOREVER APPRECIATE YOU.”

Watch the video below, courtesy of the MCSO: