Bloomberg Tells Bernie: ‘Russia Is Helping You Get Elected’

Katy Perry once again wouldn’t stop kissing a contestant on “American Idol,” eventually causing her to be dragged off the stage Monday night.

Perry, a singer and “American Idol” judge, raised eyebrows after continually kissing reality dating show “The Bachelorette” contestant Becca Kufrin on the hand during the finale, BuzzFeed reported. The singer got down from her podium, apparently starstruck, and began kneeling while continuing to kiss Kufrin’s hand. Fellow judge Luke Bryan even had to eventually drag Perry offstage since she would not budge.

“Can I be in the running?” Perry yelled out while Ryan Seacrest was promoting Kufrin’s appearance on “The Bachelorette.” (RELATED: Minnesota Lawmaker Wants To Ban ‘Bachelor’ Arie Luyendyk Jr. From Entering The State)

“I’m not single, but I still like you,” Perry said after kissing her on the hand without letting go, “Entertainment Tonight” reported. Perry then began to keep kissing the contestant until Bryan got down from his seat to grab a shocked Perry by the wrist while she was laying down and grabbed her from the stage back to the podium.

“I’m so sorry,” Lionel Richie, the other “American Idol” judge, told Kufrin and Seacrest. Despite Perry began dragged back to the podium she did not remain visible to the camera, presumably still laying on the ground. (RELATED: Teen Mad Katy Perry Kissed Him, Said He’d Refuse If Asked Ahead Of Time) 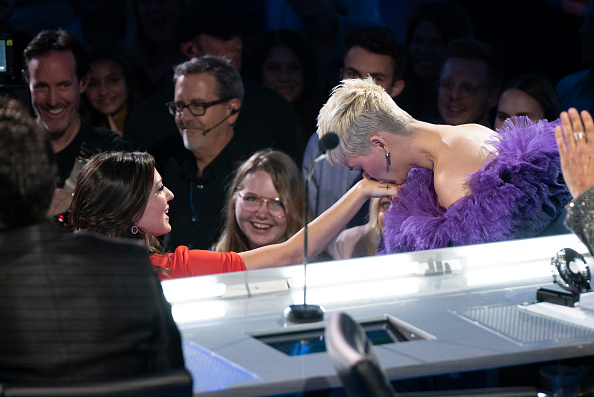 1
Bloomberg Says He 'Bought' The Democratic House Majority
Politics
2
Judge On Roger Stone Case Goes After Tucker Carlson, Trump Over Comments About Juror
US
3
Trump Snaps At Jim Acosta’s One-Liner On 'Truth' In India — 'You Ought To Be Ashamed Of Yourself'
Politics
4
Steyer Says He Would Use Presidential Powers To Tell Companies 'What Kind Of Cars They Can Build'
Politics
5
YouTube Star Asks Her Fellow Teenagers To 'Think' Before Jumping Aboard Greta Thunberg's 'Alarmism'
Energy